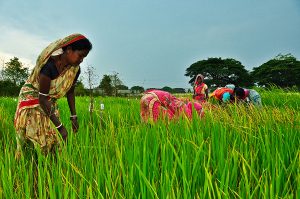 We are pleased to bring to you the fourth post in the ongoing series of insightful posts by Prof. (Dr.) N.S. Gopalakrishnan on India’s problematic plant varieties’ regime. The earlier posts in the series can be viewed here, here and here.

Obliterating the “Farmers’ Variety” (Part I)?

It is well documented that informal innovation in plant breeding by traditional farmers is one of the most important components of sustainable agriculture. It involves significant skill, effort, patience, observation, selection, saving, sowing and re-sowing of seeds. Along with this, farmers also follow the practice of sharing their seeds with others. These practices have traditionally helped maintain in situ conservation of seeds, ensuring supplies even in case of crop failures. Thus, traditional breeding is a natural process and the outcome is unique varieties of seeds with genetic variability selected by the farmers only after it is proved sustainable and suitable to particular local soil and climatic conditions. Being natural, it also possesses the quality of resisting local pests, as also ensuring high yields. It is the physical properties such as shape, size, colour, aroma, pest and disease resistant, stability of the stem etc., that are the distinctive features used by farmers to identify and select the seed. Hence the environmental and genetic variations are reflected in the phenotype of the crop. Farmers understand only the observable traits (phenotype) and not the genetic makeup (genotype – genes and genetic structure) of the seed which modern breeders are familiar with. Therefore, farmers’ varieties based on natural breeding, are distinctive in terms of features, time tested and stable to suit the soil and environmental conditions. It is also important to note that in situ conservation is a prerequisite for the continued existence of a farmers’ variety. Such practices are innovative and necessary to maintain the long term food security of a nation. It is also well documented that landraces with genetic variability are the basic raw materials for the development of improved varieties based on modern breeding techniques. It is in this context one has to examine the various statutory provisions relating to the protection of “farmers’ variety”.

Section 14(c) of the Act considers farmers’ variety as a separate category for registration under the Act. According to section 2(l) “farmers’ variety” means a variety which –

Thus the inclusion of two categories in the definition of farmers’ variety makes it abundantly clear that our Parliament wanted to capture not only existing traditional varieties that are identifiable with farmers who actually evolved it, but also varieties that are cultivated by farmers from generation to generation. It is true that the Act has not defined “wild relative”, “land races” or “variety about which the farmers possess the common knowledge”. But literature makes it evident that these are varieties repeatedly selected based on desirable traits to ensure high yielding, pest resistant and suit local soil and environmental conditions and being conserved in situ by the farming community from generation to generation. This is further substantiated by the definition of “farmer” in section 2(k) of the Act to include anyone who “conserves and preserves, severally or jointly, with any other person any wild species or traditional varieties or adds value to such wild species or traditional varieties through selection and identification of their useful properties” (emphasis mine).

Even though section 39(1)(ii) of the Act confers the right of the farmer to register farmers’ variety, it is to be noted that unlike other varieties, there is no express provision for the determination of the criteria or field test to be conducted for identifying farmers’ variety and the procedure to be followed for registering this variety. It is evident from section 15(1) and (3) that the criteria of NDUS stipulated in the Act is applicable to only new varieties and cannot be applied to farmers’ variety for registration under section 14(c) of the Act. The separate mandate for development of DUS under section 15(2) is only for extant varieties and not for farmers’ variety to be registered under section 14(c). This is further strengthened from the proviso to section 18(1) which reads as: “that in case where the application is for the registration of farmers’ variety, nothing contained in clauses (b) to (i) shall apply in respect of the application and the application shall be in such form as may be prescribed”. This gives an impression that the farmer is exempt from giving details of DUS as mandated under the Act. It is important to note that as per section 15(3)(b), the distinctiveness criteria for a new variety is based on the difference in “essential characteristics”, a term defined in section 2(h) thus: “essential characteristics” means such heritable traits of a plant variety which are determined by the expression of one or more genes of other heritable determinants that contribute to the principal features, performance or value of the plant variety”(emphasis mine). One of the conditions in the definition of “variety” in section 2(za) makes it clear that it is based on “the expression of the characteristics resulting from a given genotype of that plant grouping”. Thus the Parliament is very clear that the test of DUS for a new variety is based on genotype or genetic makeup which modern breeders are likely to be familiar with. However, such DUS standards cannot be extended to farmers’ variety that are traditionally bred, evolved or developed by the farmers based on phenotype i.e. physically observable traits.

This seems to be the reason why the farmer is exempted from having to provide proof of DUS, unlike those that claim a “new variety” for registration. Since farmers’ varieties are developed based on cultivation through a number of seasons, the phenotype characteristics of the farmers’ variety are time tested and capable of distinguishing one from another. As such, there is no further requirement of testing. This appears to be the rationale behind our Parliament not specifying any procedure for registration of the same. However, it would have been far better if this had been explicitly stated rather than left to inference.

An examination of the procedure followed by the Authority reveals that contrary to the statutory mandate, the Authority has deployed different tactics to render ineffectual the possibility of easy registration of farmers’ varieties by the farming community. Over and above the time limit prescribed for registration of the farmers’ variety mentioned in the earlier post (II), these strategies include; (i) use of the same registration form (as used for “new” varieties) mandating proof of DUS as specified in the Act and Guidelines; (ii) An additional requirement of endorsement of the application for registration from local officials to authenticate the identity and genuineness of the farmers’ claim for their variety; (iii) extending DUS and Guidelines developed for new varieties for testing the standards with concessions on field test based on Regulation 2009; (iv) following the same procedure like notification for opposition etc before registering the variety; and (v) limiting the registration to only farmers’ varieties that are identifiable with an individual, group or community of breeders, and not extending to a group or community of farmers.  These are examined in detail with the help of registration data and case studies in two forthcoming blog posts.