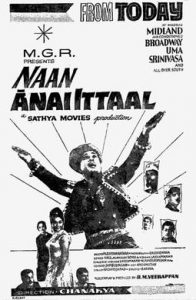 Things tend to go sour when nobody watches the watchdog. This seems to be particularly true of our hon’ble courts when they act in ex parte or undefended suits. In the latest development on this front, the Madras HC, in M/s. Sathya Movies vs M/s.Suresh Production Entertainment Private Limited, has upheld the Plaintiff’s claim that it was entitled to the protection of its film title, ‘Naan Aanaiittaal’, which was registered with the Tamil Film Producers Council.

Mr. Justice C. V. Karthikeyan, writing for the Madras HC, examined the plaintiff’s evidence, which, according to the court, proved their ownership over the film ‘Naan Aanaiittaal’. On this basis, and in the absence of any defence from the defendants, the Court decreed that the defendants may not use the title of the film, without further examining the merits of the Plaintiff’s claim to the film title.

This decision is contrary to the Court’s own examination of film title protection in M/s Lyca Productions v J. Manimaran and Ors, which we previously examined here. Even previously, the Madras High Court has categorically held that there can be no claim for copyright over the title of a film or a literary work. The Court even examined the effect of registration of a film title with a trade association and held that the title registration scheme was purely on a self-regulatory basis which stated that it would not have legal effect.

Unfortunately, the decision seems to have passed the notice of Justice Karthikeyan, merely because there was no representation from the defendant to bring it to his attention. The decision assumes either that the film title ‘Naan Aanaiittaal’ (which translates to ‘If I Order’) passes the originality threshold for copyright protection; or that the registration with the film association binds the defendant.

This trend of unreasoned ex-parte orders, where the plaintiff’s claims are not even prima facie examined, is dangerous and creates bad precedent, and is a particularly worrisome aspect of a court foregoing its responsibilities to come to the correct legal decision notwithstanding the absence of an adversarial process to help in its adjudication. We have previously reported on the case of ex parte ad-interim orders being passed against ISPs, and the disastrous consequences this has had for online freedoms.