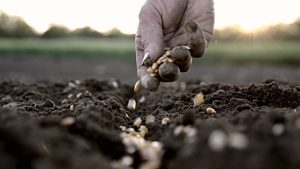 We are extremely pleased to bring to you a guest post by Prof. (Dr.) N.S. Gopalakrishnan. Prof. Gopalakrishnan is a leading IP academic from India, who has taught and groomed a number of other IP academics and researchers, including our very own founder of SpicyIP, Prof Basheer. He is now a Honorary Professor at the Inter University Centre for IPR Studies, CUSAT, Kochi, a centre that he kickstarted some years ago.

This post is the first in the upcoming series of posts by Prof. Gopalakrishnan on India’s problematic plant varieties protection (PVP) regime. Backed not just by analysis, but by meticulous data collection and empirical surveys. As he will demonstrate through a series of posts, the regime is hardly farmer friendly and is beset with multiple issues on the structural and implementation front. So without much ado, here goes the first post dealing with the issue of “extant” varieties, a category that is unique to India. As Prof. Gopalakrishnan demonstrates, the data around registration of these varieties effectively reveals a new kind of “enclosure” movement of existing public domain material by various government institutions, corporates and others.

The Protection of Plant Varieties and Farmers’ Rights Act, 2001 is a unique attempt by the Indian Parliament to create a sui generis system in India to protect the interests of the modern breeders and the farming community. In order to achieve the same, the Act recognized the registration of “extant” and “farmers’” varieties in addition to “new” and “essentially derived” varieties.

“Extant varieties” as per section 2(j) of the PVP Act comprise the following:

Outside of “extant” varieties, the Act also mandates the separate registration of farmers’ variety which means “traditionally cultivated and evolved by the farmers’ in their field and wild relative or land race or a variety about which the farmers possess the common knowledge”. These are all varieties that are publicly available and freely used by the farming communities.

The inclusion of freely available varieties for registration is a major departure from the UPOV model of protection of plant varieties which primarily focus only on registration of the newly bred variety that satisfies the conditions of distinctiveness, uniformity and stability (DUS). The Indian law also envisages different standards of distinctiveness, uniformity and stability for extant varieties and is silent on farmers’ variety, probably because they are time tested varieties evolved and developed by the farming communities. This gives the impression that Parliament had in mind two categories of farmers’ variety, i.e., (i) farmers’ variety that are extant variety and (ii) other farmers’ variety. The first category is one that satisfies the different standard of DSU test and specifically identifiable with a farmer or group of farmer or community and the second is traditional varieties that are not identifiable with a specific person or community but existing from generation to generation to be registered without any DSU test.

An examination of registration trends demonstrates that till 7th May 2018, there were 16104 applications filed under the three major heads identified by the Authority – i) new ii) extant and iii) farmers’ varieties.

3074 certificates were issued in these three categories (until 28th February 2018) and around 400 applications were closed/rejected (until May 7th 2018). A large number of applications were filed in the last two years, particularly in the category of extant and farmers’ variety, resulting in the delay in issue of certificates.

It is interesting to note that more than 80% of the certificates issued are from extant and farmers’ varieties for the 150 crops open for registration under these categories. Out of 3074 certificates issued, around 1290 are for extant varieties which include varieties notified under section 5 of the Seed Act 1966 and varieties that are commonly known (VCK). More than 80% of the registered extant varieties are owned by public funded institutions such as ICAR, Agricultural Research Institutions and State Universities and the rest are by the private seed industries both national and multinational.

It appears that the fourth category of “other varieties in public domain” included in the definition of extant variety is completely excluded from registration by the Authority since there is no Regulations made for this category and there are no applications.

Similarly around 80% of the applications closed/rejected is also for “extant varieties”, out of which the majority is for VCK. There are 28 applications pending registration due to litigation and surprisingly 11 are on VCK filed by private seed industries. As per the provisions of the Act, all the registered varieties are bestowed with the exclusive right to produce, sell, market, distribute, import or export the variety for a maximum period of 15 years. The term of protection for the varieties notified under section 5 of the Seed Act is calculated from the date of notification and for VCK, it is from the date of registration.

This shows that unlike the UPOV model for protection of plant varieties, Indian law is facilitating the enclosure of the otherwise publicly available varieties hitherto freely used by the Indian farming community. What is worrying is that the private seed industries are making serious attempt to get the maximum benefit out of this new enclosure movement which was supposed to be created to the benefit the farming community. It is important to keep a track and find out the nature of the VCK seed industries are trying to convert into private property and the implication for the same for access to seeds that were until now freely available to the farming community. Whether the farming communities are getting the benefit of this new enclosure movement is something that creates more concern.

As of now, around 1380 Farmers’ varieties are registered.  Out of this, a substantial number is registered in the name of individual farmers and only a very limited number in the name of communities. As per section 18(1)(i) of the Act, all the details including technical details that are expected to be given by the breeders in the application for registration is exempted for registration of farmers’ variety. If one examines the content of the new application form notified in 2013 for registration of farmers’ variety, the farmers are directed to give details such as botanical name approved by the International Code for Nomenclature of Cultivated Plants, 2004, family name and denomination. The farmer must also give the date of first sale of his variety, details of the registration if applied in foreign countries etc. In addition there must be a declaration to the effect that the farmer, group of farmers or community is the initial and exclusive developers and conservers of the candidate variety. An endorsement to this effect must also be obtained either by the concerned Panchayat Biodiversity Management Committee, or District Agricultural Officer, or Director of Research of concerned State Agricultural University or District Tribal Development Officer. The certificate must clearly state that candidate variety is bred/developed and continuously conserved and cultivated only by the applicant/s and is due to their efforts. These requirements not only creates hurdles for the farmers, but also exclude the second category of farmers’ varieties i.e., wild relative or land race or a variety about which the farmers possess the common knowledge from the scope of protection. It is evident that the details to be submitted by the farmers is unfriendly and makes it difficult for them to reach the Authority without the help of more proficient experts such as lawyers, scientists etc.

This being the legal position, the registered extant and farmers’ varieties will move to public domain once the period is over. One wonders whether this is what the farmers and farming communities bargained for when the law was enacted. From a long term perspective, this short term enclosure movement is not going to be beneficial for the farming communities or the Indian agriculture.

It is a fact that there is lack of clarity and overlap in the manner in which the Parliament captured the demands of the farming communities particularly the right to protect their traditional varieties and sharing of benefits they are entitled from the new varieties developed based on traditional varieties. It appears that the uncertainties in the law are conveniently used by the Authority to develop new norms against the legislative mandate to deprive the farmers and farming community what they are entitled to. One need not re-emphasise the need for preserving, evolving and developing traditional varieties and breeding practices of the Indian farming communities to promote sustainable agriculture in India. In this context, there is an urgent need to revisit the norm setting practices and procedures followed by the Authority in registering the extant and farmers’ variety. Simultaneously attempts must be made to introduce necessary changes in the law to bring in more clarity on what is due to the farmers and farming communities for promoting sustainable agriculture in India.