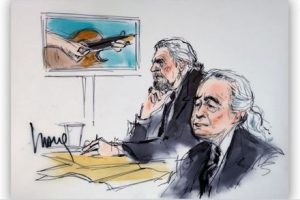 Last week’s decision of the US Ninth Circuit Court of Appeals to remand for a new trial in the famous Skidmore-Led Zeppelin dispute created quite a controversy. The litigation revolves around the popular Led Zeppelin rock song, Stairway to Heaven, which was allegedly copied from Taurus, a song written by the Spirit band member, Randy Wolfe.

The lawsuit was brought by Michael Skidmore (trustee of Wolfe’s Trust), claiming that “Led Zeppelin needs to do the right thing and give credit where credit is due”. The case was decided by the Californian District Court Judge, Gary Klausner, J., after a jury found in favour of the defendants. The Ninth Circuit Court has partly vacated the District Court judgment and called for a re-trial on the ground that improper instructions were given to the jury regarding protectability of selection and arrangement of  unprotectable elements and on originality (For gaining a clearer idea on related aspects of copying and substantial similarity dealt with in this case, do refer to our earlier posts here and here, respectively.) The Court further observed that since copying was in question and that there was proven “substantial evidence of access” to the Spirit’s work, a jury instruction on the Inverse Ratio Rule would be deemed appropriate. In this post, I’ll be solely dealing with this observation and contrasting it with the position in India.

The tests which the jury had applied for examining whether there was a case for copying is as follows:

“Because direct evidence of copying is not available in most cases, plaintiff may establish copying by showing that defendant had access to plaintiff’s work and that the two works are ‘substantially similar’ in idea and in expression of the idea…Alternatively, in the absence of any proof of access, a copyright plaintiff can still make out a case of infringement by showing that the songs were ‘strikingly similar’.”

The jury, on finding no such case of striking similarity, proceeded to explore whether there was “access” to copyrighted work i.e., “defendants had a ‘reasonable opportunity’ or ‘reasonable possibility’ of viewing Plaintiff’s work prior to the creation of the infringing work”.  This can either proven through direct evidence or through circumstantial evidence in form of (1) widespread dissemination of the copyrighted work and/or (2) chain of events, both showing defendant’s access to the work. Though there was not enough evidence to show access through direct evidence or widespread dissemination, the jury found sufficient circumstantial evidence in the form of a chain of events to establish defendant’s access to “Taurus”, where it was shown that the bands had performed in succession in festivals and had also interacted with each other on multiple occasions.

The district court did not permit recordings of “Taurus” to be played to the jury for demonstrating access and only allowed Skidmore’s counsel to play recordings to Jimmy Page outside the jury’s presence, who was thereafter questioned by the jury. The reason for this was to minimize confusion or unfair biases of the jury. The Ninth Circuit Court, noting this, observed that although the jury ultimately found that Led Zeppelin members had access to the work, the decision of the Court to not allow for the recordings to be played in the jury’s presence was an abuse of its discretion. It stated that there was low risk of unfair prejudice and the decision of the Court resulted in less probative value of the information made available to the jury.

It has to be noted here that the jury was quite correct in finding a case of access against the defendants, as pointed out by Prof. Basheer here, since it is clear from the facts discussed in the decision that the Led Zeppelin members were familiar with the song.

The Inverse Ratio Rule states that when a high degree of access to copyrighted work is proven, less degree of similarity between allegedly infringing work and copyrighted work will be required to prove infringement. The rule, as the Ninth Circuit Court correctly points out, only assists in proving copying (discussed in the section above), not unlawful appropriation (copying of protected expression). Both these elements must be proven to establish a case of infringement.

Substantial similarity can be tested under an extrinsic test (filtering of unprotectable elements such as ideas, facts, scènes à faire etc. and measuring the external, objective factors which merely focusses on unlawful appropriation), or intrinsic test (measuring the internal, subjective factors and applying the test of ‘whether the ordinary, reasonable audience’ would find the works substantially similar in the ‘total concept and feel of the works’.).

In its order, the Ninth Circuit Court explains that since the jury had merely held that the both the songs were not substantially similar under the extrinsic test, it had not reached the question of copying and hence, it had not been necessary for them to apply the Inverse Ratio Rule.

Should the Court apply the Inverse Ratio Rule in the Re-trial?

It has been argued that the access requirement, on which the Inverse Ratio Rule is based, has lost its probative value in the face of technological developments guaranteeing access to various copyrighted works and I agree with this line of view. It is quite easy to prove and in fact, almost inevitable, that most people have access to copyrighted musical works in today’s day and age of online music streaming and broadcasting.

This heavily criticized rule also suffers from logical incoherency; it implicates that increased access increases the possibility of copying, which is not true in most cases.

About the Status Quo in India

There is no such rule (thankfully) similar to the Inverse Ratio Rule in India. Courts have dealt with the proof of access test, albeit in a quite roundabout manner without laying down the test in explicit terms. A 2012 Delhi HC judgment, for instance, has deliberated on the difficulties of procuring direct evidence of copying and has held that secondary proof of copying lay in “establishment of similarities between the plaintiff’s work and the defendant’s work, combined with the proof of possibility of access by the author of defendant’s work to the plaintiff’s work” (which is similar to the proof of access test used by the jury discussed in the first section above). The wordings of this judgment hence imply that such a test is necessary for establishing a case of infringement.

The Bombay HC in a more recent judgment in 2014 has laid down that “The question of access plays a material, though not determinative, part in the assessment of any action of copyright infringement” and went on to describe the elements of access to the copyrighted and substantial similarity to prove the same. It then goes on to state that irrespective of whether access is proved or not, “if similarities are so extensive so as to eliminate any possibility of the rival work being original”, the plaintiff’s claim for injunction should be considered in that case. Since the Court has not mentioned it in express terms, I am assuming that the “extensive similarities” which they refer to are under the “striking similarity” test. However, their opinion on the need to prove access (material, not determinative) throws doubt on whether it is really necessary to prove access to copyrighted work to establish a case of infringement in India. There have also been instances where the judiciary has refrained from applying this test (For instance, see Prof’s Basheer’s post on a Kerala HC judgment where the lower court dealt with the access issue but the appellate HC failed to take note of it.). Judicial interpretation on the same by the apex court would greatly help in preventing future inconsistencies in judgments.

Conclusion: Hence, on one hand, it is clear that access needs to be proven in order to establish a case of infringement (in USA and sometimes, India!), for how can a person copy another person’s work without accessing it in the first place? On the other hand, access must not be interpreted to necessarily imply copying, as required by the Inverse Ratio Rule. This obsolete test should therefore be done away with by Courts in order to prevent legal absurdities in the future.