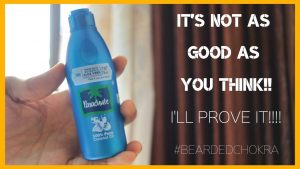 What happens when social media influencers such as bloggers and vloggers comment on the quality of branded products recklessly? Earlier this month, Justice Kathawala of the Bombay High Court had granted an interim injunction against one such vlogger’s video in Marico Limited v. Abhijeet Bhansali. The branded product in issue is PARACHUTE coconut oil sold by Marico Limited, the plaintiff, and the vlogger involved is Abhijeet Bhansali, the defendant.

Bhansali makes a living solely by creating and publishing video content on his YouTube channel “Bearded Chokra”. The viewership of his content generates revenue for him. One such video landed him before the Court in a suit by Marico where he literally rubbished PARACHUTE branded coconut oil primarily based on a “freeze test”.

For those not well-versed with coconut oil (no worries, even yours truly, a proud Malayali, did not know these nuances till the writing of this blogpost), there is coconut oil (yellowish in colour) and then there is virgin coconut oil (colourless and clear as water). While the former is extracted from dried coconuts or copra, the latter is extracted from wet coconuts. And if you add the prefix ‘organic’ to either of these types, it means that the coconuts used in the respective products are grown without any chemicals or fertilizers.

In the offending video titled, “It’s not as good as you think! I’ll prove it!”, Bhansali is forceful, decisive and assertive with his words and statements against PARACHUTE branded coconut oil. He explains that it is one of the most sold and consumed coconut oils in India and that he was going to “break down all the tiny details” about the product and “bring the truth” to the viewers. After making some initial remarks about the “rotten coconut smell” and “flimsy cap” of the product (which according to Marico won the 2017 INDIA STAR Packaging Award 2017 across 12 categories), he proceeds to conduct a “freeze test”.  In the test, he is comparing PARACHUTE coconut oil with “organic coconut oil” “joh mere pass hai” (“that I have with me”).  The first point to note here is that “coconut oil” and “organic coconut oil” are two separate categories that cannot be compared.

He then pours the respective oils into two separate glasses and freezes them in the refrigerator for some time. When he takes it out, he points out that PARACHUTE coconut oil did not freeze well, that it is greyish in colour with impurities, whereas his sample froze perfectly and is snow white in colour. Conspicuously, Bhansali did not state the details of the product used by him for comparison or its source in the “freeze test”.   The next important point to note is that, beyond the colour of the respective oils in the frozen and liquid forms, Bhansali has not analysed any other parameters of Marico’s product.

Brief Arguments of the Parties

Marico argued before the Court that the video was intended to malign the company and its product, that the “freeze test” was the wrong test, that it amounted to disparagement, slander of goods, and malicious falsehood and that it was entitled to special damages. Bhansali defended the video and his actions stating, among others, that it was an effort to educate the public, that he is not a competitor of Marico, that Marico is not entitled to damages in the absence of proof that its revenues were affected and that he had the freedom of speech in the absence of fetters under existing laws.

Some of the Findings by the Court

Interestingly, while Bhansali refers to the product used for comparison as ‘organic coconut oil’ in the video, in his affidavit in reply in the suit, he states that the test in which he compared PARACHUTE coconut oil was with “virgin coconut oil”! Bhansali attempted an ingenious defense that Marico’s product label, which depicted a wet coconut with water splashing out (which is incidentally its registered trademark) tricked consumers into believing that its product was derived from wet coconut instead of copra. The Court found this explanation by Bhansali “astounding” and noted that it is not and could not have been that Bhansali did not know the difference between ‘virgin’ and ‘virgin organic’ coconut oils, because in the latter part of his video, he recommends ‘virgin organic cold pressed coconut oil’ to his viewers as an even higher grade of coconut oil.  The Court, therefore, held that Bhansali has purposely and knowingly misrepresented that he was comparing Marico’s product with ‘organic coconut oil’ when he was actually comparing it with ‘virgin coconut oil’.

Social Media Influencers and their Responsibility

Court noted that social media influencers are individuals who have acquired a considerable follower base on social media along with a degree of credibility in their respective space and their statements have a magnified and profound impact on their audience. However, it pointed out that, with power also comes responsibility and hence a social media influencer cannot deliver statements with the same impunity available to an ordinary person.

Based on the review of the video and the insufficient material relied on by Bhansali, the Court noted that his statements were false and were made recklessly. In cases of disparagement or slander of goods, the Court observed that, the reputation of the plaintiff’s product is impacted where customers are induced not to purchase its product. To analyse this further, the Court examined some of the comments on Bhansali’s channel regarding the video, where several customers of Marico had expressed their decision to stop purchasing the product after watching the video. Based on the same, the Court concluded that the damage suffered by Marico could not be underestimated and held that the video met all the three factors of “intent, manner and message sought to be conveyed” as laid down by the Division Bench in Gujarat Cooperative v. Hindustan Unilever, as the factors for deciding the question of disparagement. As such the Court found that Marico suffered special damages.

Accordingly, the Court directed Bhansali to take down the offending video in the interim.

Appeal before the DB

Yesterday, a Division Bench of the Court, while admitting an appeal by Bhansali, asked the parties to resolve the matter amicably.

The LiveLaw article refers to two observations by the Bench. The first one is that, “freedom of speech is always put on a higher pedestal than reputation even though both are fundamental rights”. And the second one is that, “if the society is reposing trust in what they (social media influencers) say, then that trust comes with an obligation. The problem with the internet and social media nowadays is that there is so much information that people mistake it for knowledge”.

Currently, these observations do not give any clue as to the mind of the Division Bench. However, having read the order of the Single Judge, I am hopeful that the Division Bench will see through the bearded Chokra’s video trick.