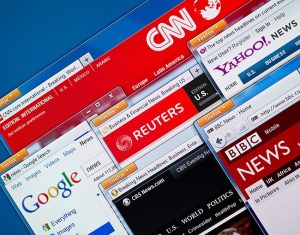 Last year, the Directive on Copyright and Related Rights in the Digital Single Market was adopted in the EU (text available here). The IPKat blog carries a series of posts on it starting here, for those who are uninitiated on the subject.

I only intend to discuss a limited point from this new Directive – its impact on “information society service providers” publishing “press publications” online. This impact arises from an entirely new class of right being granted for press publishers, extracted below:

The rights provided for in the first subparagraph shall not apply to private or non-commercial uses of press publications by individual users.

The protection granted under the first subparagraph shall not apply to acts of hyperlinking.

The rights provided for in the first subparagraph shall not apply in respect of the use of individual words or very short extracts of a press publication.

5. Member States shall provide that authors of works incorporated in a press publication receive an appropriate share of the revenues that press publishers receive for the use of their press publications by information society service providers.”

According to recent press reports, among others, Google News is already in talks with French Publishers (France being the first Government to implement the Directive) to pay royalties based on this new Directive. Technically, this directive is applicable to all “information society service providers”, which, going by some Directives (Directive 98/34/EC as amended by Directive 98/48/EC) covers any service provider offering a service, at a distance, by electronic means and at the individual request of a recipient of services. News aggregators and even social media sites are directly covered.

As per this new class of right, publishers of press publications are vested with rights under Article 2 and Article 3(2) of Directive 2001/29/EC for the online use of their press publications by “information society service providers”. This would include the exclusive right to reproduce and the exclusive right to “communicate to the public”. This right is limited to a 2-year period and is only prospective in nature. Various Recitals to this directive provide the policy reason towards such a special right (see, Recitals 54-59) – the concern is that without some additional protection/exclusivity online, press publications are finding it difficult to recoup their investments given the complexity of the issues (and the consequent inefficiency in resolving them) involved in the digital arena.

The term “Press publications”, which is the subject matter of protection under this new right, is defined in Article 1(4) of this new Directive:

“(4) ‘press publication’ means a collection composed mainly of literary works of a journalistic nature, but which can also include other works or other subject matter, and which:

(a) constitutes an individual item within a periodical or regularly updated publication under a single title, such as a newspaper or a general or special interest magazine;

(b) has the purpose of providing the general public with information related to news or other topics; and

(c) is published in any media under the initiative, editorial responsibility and control of a service provider.

Periodicals that are published for scientific or academic purposes, such as scientific journals, are not press publications for the purposes of this Directive;”

Article 15(1) of this new Directive gives three clear exceptions to this additional right:

Obviously, this issue has arisen in the EU because of the new law/new right, which obviously does not exist in India. This new EU law seems to state that “In the absence of recognition of publishers of press publications as rightholders, licensing and enforcement of rights in press publications regarding online uses by information society service providers in the digital environment are often complex and inefficient.” At a minimum, this seems to be an admission that but for this new right created, there is no clear answer to whether services offered by news aggregators amounts to infringement under existing principles of copyright law.

What then of countries like India that do not have this special right created in India? Under traditional copyright law analysis, do news aggregators violate the copyright in literary works of news agencies? Usually, news aggregators tend to provide a snapshot/snippet/summary of the news content with a hyperlink to the original content. Does the length or content of their snapshot/summary matter? Would just use of the headlines amount to infringement? Does it matter whether they are hyperlinking to the original content?

There is at least one judgment in the UK dealing with some of these issues, which was ultimately referred to the ECJ on certain questions of law. The issue came up before the English Court of Appeal in the case of the Newspaper Licensing Agency Ltd. v. Meltwater Holding BV ([2012] R.P.C. 1). Meltwater provided a commercial media monitoring service, wherein a curated report of every article published online on a wide range of websites was issued to each customer of Meltwater, based on the particular search terms relevant to the customer. The report would typically contain the headline of the article, a hyperlink to the original website of the article, the opening text in the article following the headline and a short extract of the article itself. The question was whether this would amount to copyright infringement without a specific license agreement. The court of first instance held in favour of the news agency. The Court of Appeal dismissed the appeal filed against this decision.

It appears the Court was only seized with assessing the issue on a prima facie basis, on the balance of probabilities. The English Court of Appeal concluded that that there was no per se rule against granting copyright protection to headlines (Para 21, 22). The Court also felt that there was a significant probability that reproducing the headline and an extract could constitute a copy of substantial part of the original work and therefore, the activities were sufficiently likely to constitute prime facie the infringement of copyright (Para 28 – 29). Interestingly, the court of first instance cited an earlier judgement (Infopaq, Case C–5/08), where it was held that even a mere 11 word extract could be sufficient for it to be considered a substantial reproduction, so long as it includes an expression of the intellectual creation of the author. The challenge against this specific finding was rejected by the Court of Appeal.

This matter was taken on appeal to the Supreme Court of the United Kingdom, which referred the following preliminary questions of law to the ECJ:

are such copies (i) temporary, (ii) transient or incidental and (iii) and integral and essential part of the technological process within the meaning of Article 5(1) of Directive 2001/29/EC?”

The issue, therefore, became narrower in that the alleged infringing content was now made available/restricted only to the website. The focus then turned to whether such access on the website would be exempt under Article 5(1) of Directive 2001/29. This exception was meant for temporary or transient reproduction of copyright protected work as part of a technological process to enable transmission across a network. Applying the settled principles of interpretation of Article 5(1) to the facts of the case, the ECJ concluded it was indeed covered by the exception and held the following:

A similar exception is incorporated in Section 52(1)(a)(b) and section 52(1)(a)(c) of the Copyright Act. In particular, Section 52(1)(a)(b) states that the transient or incidental storage of a work purely in the technical process of electronic transmission or communication to the public shall not constitute an infringement of copyright. The phraseology used in the Indian provision is pari materia with some of the ingredients in the above-noted Article 5(1) of the EU Directive (the EU Directive has additional requirements to fulfil). If we apply the aforesaid ECJ judgement, for a news aggregator or social media platform, or any website for that matter, to display hyperlinks (with or without headlines and/or extracts) to articles/press publications on other websites, would not amount to infringement. The nature of the exception is such that one need not necessarily assess whether the headline and/or extract amounts to a substantial reproduction, on a case-to-case basis.

Therefore, prima facie, it appears that barring the creation of a new class of rights for press publications like in the EU, it may not be automatically possible to injunct news aggregators in India. However, I think this applies only in the context of freely available articles and the answer could be different if the website placing the original content has restrictions on access.