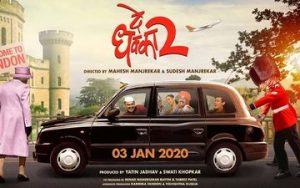 A Single Judge of the Bombay High Court recently passed an order in the case of Zee Entertainment Enterprises v. Ameya Vinod Khopkar & Ors. The case concerned an allegation of copyright infringement and passing off in respect of the film ‘De Dhakka’. The Plaintiff had sought a permanent as well as an ad-interim injunction restraining the Defendants from producing a sequel of the film under the title ‘De Dhakka 2’. The Court refused to grant an ad-interim injunction, holding that the assignment deed, which had assigned the rights of the original film to the Plaintiff, prima facie did not transfer them the right to make a sequel or a prequel. It also rejected the claim in respect of the film title, reiterating that the title of a work is not copyrightable and also noting that there was no case for passing off as the impugned film being a sequel could not be passed off as the original film.

Zee Entertainment Enterprises Limited (ZEE) approached the Bombay High Court seeking a permanent and an ad-interim injunction against four defendants from releasing De Dhakka 2 which they claimed was evidently a sequel to the original film, De Dhakka, over which they had rights. The defendants included Ameya Vinod Khopar and another producer (defendants No. 1 and No.2) and Satya Films (defendant No. 4, owned by defendant No. 3) who were the producers of the original film, who had then assigned their rights to ZEE. The dispute was particularly concerned with the copyright in the underlying literary work including title, characters, script and dialogues in De Dhaka, and the trademark over the original film title, which the Plaintiff claimed was transferred to them through an Assignment Deed and hence the Defendants had no right to make De Dhaka 2 using the same.

ZEE relied on a Deed of Assignment that was entered into with Satya Films back in 2008 to establish that they had rights over any future works concerning De Dhakka. While the 2008 Assignment Deed transferred ‘Negative rights’ over De Dhakka, the Plaintiff relied on the phrase “Negative rights or any other rights that may be discovered or come in the future” to make their claim over De Dhakka 2. It was argued that if the Assignment Deed is read in its entirety and taken as a whole, the Plaintiff received all rights concerning the film and future works.

The Defendants used the same argument in favour of reading the Assignment Deed as a whole and in its entirety to arrive at the diametrically opposite conclusion that ZEE was not given any right over the prequel or sequel of the film.

To resolve this dispute, Justice Colabawalla scrutinized the language of the Assignment Deed and relied on the precedent set in Narendra Hirawat & Co. v. M/s Alumbra Entertainment & Media Pvt. Ltd & Ors to arrive at a decision that went in favor of the Defendants. This judgment holds that, since the words ‘sequel rights’ appear nowhere in the Assignment Deed it cannot be concluded that the Defendants had assigned to the Plaintiff a right in the sequel too. Also, since the agreement was specifically for transferring the ‘Negative Rights’ of De Dhakka, it cannot be concluded that the Defendants assigned or even intended to assign more rights than those explicitly mentioned in the Assignment Deed. Further, the judge also relied on the claim made by the Defendants that De Dhakka 2 has a completely different script, different dialogues, different concept, different characters and different locations and different music. Citing these reasons after looking into the language of the Deed, the judge concluded that there was no prima facie case for granting an injunction.

The Bombay High Court has created for itself a tradition in arriving at cogent decisions for copyright infringement claims regarding films (more examples here and here). In line with this tradition, the current judgment too takes into consideration the language of the Assignment Deed, its intention to transfer rights and commercial interests that may be affected by its decision.

What the Assignment Deed Says?

The ASSIGNOR (Satya Films) declares and undertakes that he shall not hereafter grant or in any way transfer the said Negative rights or any other rights that may be discovered or come in future of the said PROGRAMME (De Dhakka) or any part thereof to any other person, party, company or organization. (Emphasis mine)

Here ‘Negative rights’ refer to the transfer of ownership rights in the film negatives of De Dhakka.

And clause 5(a) of the Deed stipulates that –

Reading ‘any other rights that may be discovered or come in future’ exclusively can possibly lead to the conclusion that even the rights to sequels is being transferred by the Defendant. Further, this particular clause is also indicative of bad drafting that has caused the present confusion over the rights. The assignment of rights that may be discovered in the future is overwhelmingly vague and the Deed can be voided for vagueness under Section 29 of the Indian Contract Act. However, the entirety of the Assignment Deed pertains the ‘Negative rights’ of De Dhakka and hence any future work must be understood to mean works concerning only the original film, which can include remakes, using the film’s music and dialogues etc. Future works cannot be extended to mean sequels or prequels unless it is explicitly mentioned so in the Assignment Deed as it would simply be beyond the terms of the agreement.

The precedent set in Narendra Hirawat, which was used by J. Colabawalla, also focused on the conspicuous absence of any mention pertaining ‘sequels’ regarding the film Sarkar in its Assignment Deed to arrive at the conclusion that the assigned right to remake a film does not include a sequel. Similarly, De Dhakka’s Assignment Deed also makes no mention of a sequel. Given this absence, ZEE cannot rightfully claim that they have rights over the sequel to De Dhakka, which was never assigned to them in the first place.