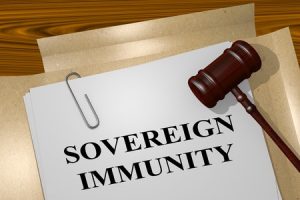 Last month, the US Supreme Court issued its judgement in an interesting case involving sovereign immunity for copyright infringement. This was the case of Frederick L Allen v. Roy A. Cooper, III, Gov of North Carolina et al. The copyrighted work in question involved the videos and photos taken by the plaintiff concerning the shipwreck of the Queen Anne’s revenge. The plaintiffs sued the State of North Carolina when it published some of these videos and photos online and the State of North Carolina moved to dismiss the suit claiming sovereign immunity. The district court agreed with the plaintiff, whereas the Court of Appeals for the Fourth Circuit reversed this decision. The US Supreme Court agreed with the Court of Appeals for the Fourth Circuit.

More than IP, this case involves constitutional law and what is perhaps, a unique situation in the US. As some readers may already be aware, in the US system, each State government is considered a sovereign entity within the Federal structure. Under the US Federal Structure, more power is conferred on the States that at the Federal level and therefore, the Federal Government has limited subjects on which it can make laws. It is an accepted principle dating back to the Federalist Papers that despite consenting to the formation of a federation called the United States of America, the States cannot be sued absent consent. However, precedents (pgs. 4-5 of Frederick L Allen v. Roy A. Cooper, III, Gov of North Carolina et al) suggest that where Congress (the Federal government) enacts unequivocal statutory language to abrogate said sovereign immunity and the law is justified under a constitutional provision, then State governments may be sued even without its consent.

The crux of the matter was whether a legislation passed by the Federal government in the copyright context validly abrogates the sovereign immunity enjoyed by State governments. The Federal statute in this case was the Copyright Remedy Clarification Act of 1990 (‘CRCA’). The relevant provision is contained in 17 U.S.C. §511. In summary, this provision states that any State, any instrumentality of a State, and any officer or employee of a State or instrumentality of a State acting in his or her official capacity, shall not be immune from suit in Federal court for copyright infringement. It also clarifies that the remedies available against any private or public party would equally apply here as well.

Unfortunately for the plaintiff, the US Supreme Court effectively held that its conclusion was foreclosed by a precedent set by the court in the patent context, in the case of Florida Prepaid Postsecondary Ed. Expense Bd. v. College Savings Bank 527 U.S. 627 (1999). In that case, an almost identical provision under the patent law was held invalid to the extent it abrogated the sovereign immunity of States. The Court had very clearly held that the powers under the Intellectual Property Clause (Article I, §8, cl. 8) that authorize the Congress to enact IP laws, cannot be used by the Federal government to abrogate sovereign immunity. The US Supreme Court in the present case decided that it will stick by this precedent.

The alternative argument was that such a law is authorized by the 14th Amendment. Section 1 of the 14th Amendment, among others, prohibits the States from “depriving any person of life, liberty, or property, without due process of law”. Section 5 of the 14th Amendment authorises the Congress (Federal government) to enforce the provisions of the 14th Amendment through appropriate legislations. Even after acknowledging that copyright was a form of “property”, the Court held that not all copyright infringements by the State would automatically violate the due process requirements. The Court held that for a due process violation to occur in the context of State action, the alleged infringement must be “intentional, or at least reckless“, without there being an adequate remedy for such infringement. The evidence before the Court pointed to the fact that there have not been any significant number of copyright violations by States and in any event, most of such past occurrences constituted in an honest misunderstanding rather than “wilful infringement” in any sense.

So, even today, in the US, State Governments can get away with copyright and patent infringements since their sovereign immunity stands. I wonder if this immunity has been taken advantage of in the past or even in today’s context with the COVID-19 scare. The answer is in the negative to the best of my knowledge (I am open to correction). It may be worth contemplating why this is the case.

Is US in violation of its international obligations?

To a large extent, the judgement may not be highly relevant to the Indian context because the doctrine is practically meaningless here and our Constitution also does not contain such unique provisions/limitations as were confronted by the US Supreme Court. States can be sued for IP infringement claims in India though they may claim any of the recognized defences contained within the relevant statute (e.g. Section 47(1),(2),(4) of the Patents Act; Section 52(1)(d),(e),(za) of Copyright Act).

However, in my opinion, it does raise the question of US’ international obligations. In public international law, the Federal/Central Government is held responsible for a breach of international law even by a sub-unit or even the judiciary. “State Responsibility” extends to acts of sub-units of the Federal Government, local bodies and even the judiciary. In my reading of the TRIPS Agreement (which also incorporates other IP treaties such as the Berne Convention, Paris Convention etc.), it does not permit for any carte blanche immunity for governments or instrumentalities thereof from being sued for infringement. The TRIPS Agreement does, however, permit narrow and limited exceptions to be created. This can be seen in Article 13, for instance, in the context of patents; Article 26(2) in the context of industrial designs; and Article 30 in the context of patents. All three provisions are identically worded and allow for exceptions that “do not unreasonably conflict with the normal exploitation of [IP right in question] and do not unreasonably prejudice the legitimate interests of the owner of the [IP right in question], taking account of the legitimate interests of third parties.” There is some jurisprudence on such provisions, being the Panel Report in US — Section 110(5) Copyright Act and the Panel Report in Canada — Pharmaceutical Patents. The three cumulative tests in the provisions are pretty subjective and I do not intend to get into a detailed discussion on the subject. Nevertheless, I do believe the question is legitimate and requires further exploration.