[This post has been co-authored with Praharsh Gour. Praharsh is a graduate from Hidayatullah National Law University, Raipur and is presently an LL.M. candidate at the Faculty of Legal Studies, South Asian University, New Delhi] 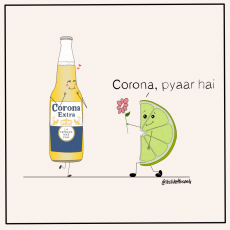 Perhaps a more palatable pun? Image from @itslikethisonly. On this note, readers may be interested in news that Eros International apparently recently registered “Corona Pyaar Hai” as a film title!

You know you are in for a roller-coaster ride when the name of your 95 year old brand resembles the ongoing pandemic. The recent Covid-19 outbreak has perhaps left the famous beer brand ‘Corona’ swinging like a pendulum between two wildly varying image issues. On one hand its namesake similarity with the novel Coronavirus is ridiculed through memes, and on the other is garnishing a tonne of free publicity. This post will discuss how the Coronavirus pandemic has brought this brand before the court against a party for allegedly disparaging its trademark in the context of this pandemic.

First, a bit on the name(s) : The story behind the name of the Coronavirus dates back to 1968, when an informal group of eight virologists discovered a new group of virus, resembling a “solar corona” under the microscope. Unrelated to this scientific feat, the Corona labelled alcoholic beverage (beer) seems to be named after the Spanish translation of the word “crown”, which is also an inseparable part of its label. The Corona beer was first brewed in 1925 and is one of the most recognizable brands globally (70th if we go by the 2019 list of the world’s most valuable brands by Forbes) and is served in 120 countries worldwide. The brand is owned by the Anheuser-Busch InBev, (except in the USA where it is owned by the Constellation Brands) and the beer is brewed by Grupo Mondelo in Mexico. It is Cerveciria Modelo de Mexico, a brewery under Grupo Mondelo, who is the petitioner in the current case.

On June 22, a single judge bench of the Delhi High Court passed an order granting ex-parte interim injunction prohibiting M/s. Whiskin Spirits from publishing and sharing an advertisement ridiculing Corona beer for its pandemic namesake, till the next date of hearing. The court held that there is a prima facie case for disparagement which will jeopardise the statutory and commercial interests of the proprietor of the trademark Corona. Referring to the market of the subject product, the court held the balance of convenience is in the favour of the Plaintiff and obliged its request for an ex-parte interim injunction setting the next date for hearing on July 22.

The suit (C.S (Comm.) 186/2020), was instituted by Cerveciria Modelo de Mexico (Plaintiff), on June 20. Though the order granting the interim order says that the plaintiff owns the wordmark “Corona”, this seems to either be a typo, or factually incorrect. A public search shows that the wordmark “Corona” in Class 32 lies with Thomas and Evans Ltd.(appln no 199020, filed in 1960) as well as with Britvic Softdrinks Ltd., (appln no 724413, filed in 1996 – perhaps honest, concurrent use?), and not with Group Modelo. Group Modelo does however own the marks “Corona Extra”, and “Corona Light (Label)”. Nonetheless, while a trademark order should not have such mistakes, this does not seem to be a material error in this case.

The ad in question, as taken from the interim order. Interesting to note that the defendant’s product does not seem to actually be distinguishable from this image.

Coming back to the facts of the case, the Plaintiff alleged that M/s. Whiskin Spirits Pvt. Ltd. (Defendant – also identified, for some reason, as one of its former distributors), has published advertisements on Facebook which links the Plaintiff’s product with the ‘coronavirus’ and thereby alleges disparagement of its trademark. The order shows what is presumably the advertisement in question (shown on the left).  While the plaintiff’s arguments don’t seem to be available on the Delhi High Court site, as per this article, they allege that the advertisement shows small whisky bottles practising ‘social distancing’ from the Corona Extra beer. This apparently shows the public that they too should practice social distancing from that product, and choose Defendant’s product instead. The court, without recording its assessment of the advertisement, simply stated that it found a prima facie case and balance of convenience in the Plaintiff’s favour, and ordered an ex-parte interim injunction in favor of the Plaintiff.

Ex-parte interim injunctions must have reasons explained, and not as a mere formality. It has been expressly held by the Supreme Court, and something that posts on SpicyIP have discussed several times. It is also something which nonetheless continues all too frequently.

In comparative advertising that does not outright denigrate a competitor’s product (which is a permitted form of speech under the fundamental right to freedom of speech and expression (Article 19(1)(a)) and a nominative fair use under Section 30 (2)(d) of the Trademark Act), two rival products are compared with one of them being projected as the better alternative. On the other hand disparagement is essentially a publication whereby an advertiser casts apprehension about the quality of the product of a competitor damaging its reputation. Theoretically, while comparative advertising may be permissible, disparagement amounts to infringement of a trademark, under Section 29 (8) of the Trademark Act. However, such a straitjacket demarcation between the two is often not possible and is not rational – and this has been recognised by courts as well (here and here).

The present case however is a bit more peculiar, in that the ‘denigration’ is allegedly being done by comparing the plaintiff’s product with an external phenomenon, which doesn’t have anything to do with the quality of the product, but merely has a overall negative connotation/association to it. Can disparagement be shown when a competitor is using a ‘wisecrack’ around the etymological similarity between a product name and an external  phenomenon? In the present case it would be difficult to believe that any viewers would see the defendant’s depiction of 8 smaller bottles maintaining a ‘social distance’ from the namesake of the current pandemic virus, and believe that the beer is actually spreading a virus, or connected to the virus in any way. This ‘obviousness’ of the non-literal nature of the advertisement lends itself to showing that the advertisement is more in the nature of a parody or pun. A very common one at that – as there are several memes along the same lines already out there. The Defendant’s advertisement nowhere discredits nor undermines the value of the Plaintiff’s product but instead merely makes a cheeky observation about the name i.e. making a pun out of the Plaintiff’s trademark, something which the Delhi High Court in Dabur India v. Emami Ltd. indicates as quite permissible, stating:

“There is bound to be creativity, pun and a storyline in such messages, so that it creates an impact on the viewers or the readers.” …. “Some leeway has always to be given to the advertiser, but at the same time right to free speech cannot be stretched to allow them to become defamatory, disparaging or denigrating. One cannot ignore the fundamental characteristic of comparative advertisements is appraisal by contrasting the products. There will often be an element of negative or adversarial comparison. This is the natural outcome or byproduct of “comparison”.” (Para 35)

There is no doubt that ‘corona’ brings to mind the virus – to probably most people on the planet right now – regardless of this ad. However, does this mean that people think it has any connection to the beer? Beer drinkers around the world certainly don’t think so, if the beer’s sales figures are anything to go by – they are only posting higher sales percentages for their holding entity, prior to the economic lockdown. The brand’s US exporter Constellation Group’s Senior Director of Communications in fact specifies this quite clearly: “Despite the misinformation circulating, consumer sentiment and sales remain strong. Consumers understand there’s no linkage between the virus and our business.” 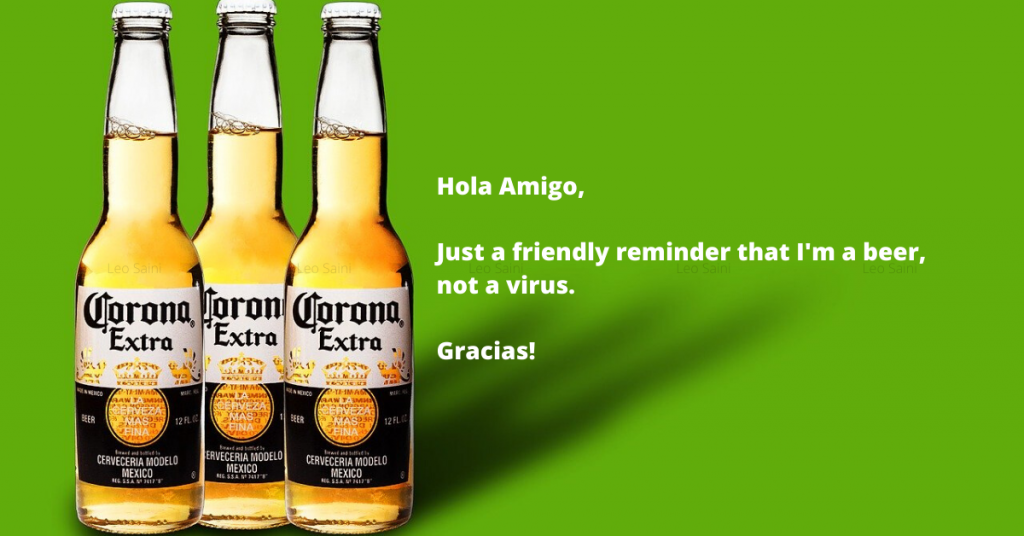 All in good humor perhaps?

It must be remembered that poking fun at other brands is not a new concept either. Readers may recall the famous Coke v. Pepsi cola wars where the brands resorted to audacious parodies at the expense of the other. In adjudicating over one such instance between the cola rivals, the Delhi High Court in Pepsi Co. Inc. v. Hindustan Coca Cola Ltd., noted that the usage of phrase “Yeh dil maange no more” is nothing more than a cheeky parroting of Pepsi’s famous “Yeh dil mange more” tagline and is not a trademark infringement.

Delhi High Court in Tata Sons v. Greenpeace International, has expressly clarified that to determine if defendant’s work will stand out as a parody or not, it must be seen as a whole from the perspective of a reasonable man, who is sensitive to both free speech values and objectives of trademark law and cautioned that it cannot “anoint itself as a literary critic” nor can “it don the robes of a censor” in such situations. Along similar lines, in Dabur v. Emami, the court stated, “if it can be gauged that the message broadly demonstrates slanderous or indiscriminate negative comparison or insinuation, Courts should not be slow in ensuring that such messages do not spread. If it does hurt or annoy the Plaintiff, it is nothing but display of an over sensitive approach, that can‟t be helped.”

Considering the nature of the impugned advertisement in the present case, it seems at best to be a case of harmless trolling. This isn’t a new concept either, with now famous one-up-manship games going on between Apple/Samsung, Mercedes/Jaguar, etc. In fact there are arguments advocating many of such trolls and memes should be regarded as artistic work and be accorded copyright protection instead!

Ironically Corona the brand has built its brand image around the idea of a ‘beach state of mind‘, and living a carefree life. Maybe a good reminder to simply live and let laugh! Jokes apart, we must remember that the approach of our courts regarding parody and trolling is relatively unexplored and this might be a good time for courts to analyse such uncharted territories.