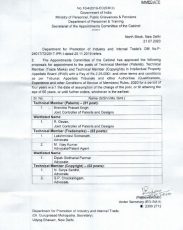 Last night, Anushree Rauta of the IPRMENTLAW blog, made public an order of the Appointment Committee of the Cabinet (ACC) clearing the decks for the appointment of five technical members to the Intellectual Property Appellate Board (IPAB). The order is dated July 21, 2020. Of the five members, Joint Controller B.P. Singh has been appointed as Technical Member for Patents; Advocates Lakshmidevi Somanath and Vijaykumar have been selected for the posts of Technical Members for Trademarks and Advocates N. Surya Senthil and S. P. Chockalingam have been appointed as Technical Members for Copyright. After the clearance of the ACC, the selected members have to go through the process of medical tests and police verification before a warrant of appointment can be issued by the President.