In an interesting scenario that perhaps adds to the mounting pile of evidence of ex-parte interim injunctions being problematic, the Delhi High Court on 9th September, 2020, modified an ex-parte interim injunction order after finding that the plaintiff concealed material facts during the hearing. The initial order had estopped the defendants, Sujata Electronics (defendant no. 1), its manufactures (defendants no. 2 & 4), and its dealers (defendant no. 3) from manufacturing, importing, selling any products under the mark ‘SUJATA’. And the recent order modified the injunction, permitting the defendants to continue to sell and manufacture 3 specific products i.e. “water filters, water purifiers and RO systems” bearing the mark ‘SUJATA’ while keeping the terms of injunction intact against the use of the trademark on any other products. The court also directed for returning the goods seized by the local commissioners, back to the defendants.

The court passed the initial ex-parte interim injunction, seemingly under the impression that the plaintiff (Mittal Electronics) held exclusive proprietary rights over the mark under different classes. However, the defendant later appraised the court that plaintiff has concealed the fact that defendant no.1 too owned the mark ‘SUJATA’, under class 11 (Apparatus for lighting, heating, steam generating, cooking, refrigerating, drying ventilating, water supply and sanitary purposes) for use over water filters, water purifiers and RO systems!

In this post I shall highlight some of the key findings of the court, specifically focusing on the clean hands doctrine and question of confusion in minds of public.

The plaintiff claims to have adopted the trademark ‘SUJATA’ in 1991 from its predecessor, who had originally adopted the mark in 1980. The plaintiff says it is in the business of manufacturing and selling a variety of electrical goods and home appliances and have trademark registrations under classes 7, 8, 9, 11, 35 (Note: The application under class 11 (for lighting, refrigerating, drying, water supply and sanitary purposes including water filters, water purifiers and RO systems) was made in 2014).  As per their submissions, the plaintiff came to know about the defendant’s use of an identical mark when one of its technicians was called to repair a geyser bearing the mark ‘SUJATA’ and realised that it wasn’t the one manufactured by the plaintiff. Consequently, the plaintiff instituted a suit on 06/02/20, seeking permanent injunction against the defendant from manufacturing, purchasing or selling home appliances and other accessories under the mark ‘SUJATA’ or ‘Star SUJATA’ and also filed an application for interim injunction. The plaintiff also asked the court to declare its marks as “well known” and for delivery up, rendition of accounts, damages etc.

The court, through order dated 7th February, 2020 (pdf), had held that the plaintiff made a prima facie case and if no ex-parte ad-interim injunction is granted, it would suffer irreparable loss. The court also held that balance of convenience lies in favour of the plaintiff and against the defendants. Fulfillment of the above three factors is the condition precedent for a court to pass a valid interim injunction. While the order elaborates the prima facie case, the reasons for ‘balance of convenience’ and ‘fear of irreparable injury’ seem to be missing. Premises of the defendants were then inspected and goods bearing the impugned mark were seized. The defendants promptly filed an interim application, seeking variation in the interim injunction order granted by the court, permitting the defendants to manufacture and trade in water filters, water purifiers and RO systems bearing the mark ‘SUJATA’.

Suppression of the Material Facts by the Plaintiff

The defendant alleged that the plaintiff has suppressed a few material facts to get an ex-parte injunction in its favor. The defendant appraised the courts that:-

(Side note: Interestingly, the defendant’s application for registration of the mark ‘star SUJATA’ under class 11, was rejected on ground of similarity of the marks with plaintiff’s prior registered trademarks.) 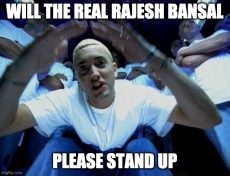 The plaintiff responded saying that despite due diligence there was no way it could have established that both Rajesh Bansals (The one who opposed its application /holds proprietary rights over the mark ‘SUJATA’ under class 11 and the director of defendant no. 1) are the same.

The court rejected this, holding that the master data of the defendant no. 1 (pdf) which is available on the Registrar of Companies’ website clearly shows that Mr. Rajesh Bansal is one of the directors of the defendant no. 1. The court acknowledged that the addresses of Mr. Bansal in both the documents are different, but ultimately held that “the fact that Rajesh Bansal was one of the directors of defendant no. 1 was sufficient for the plaintiff to have carried out further investigation…particularly in view of the fact that due to earlier objections before the Trade Mark Registry, plaintiff was aware that one Rajesh Bansal through has a registration of mark ‘SUJATA’ in his favour.”

The court also noted that the plaint was filed on a complaint of a geyser and yet sought injunctions over products like water purifiers, RO systems despite the fact that it has neither made/ sold any of the three products nor have made any specific claims in the plaint about such products! This also makes one wonder as to why this was not noted in the initial order, prior to granting an ex-parte injunction over these! 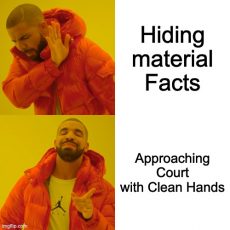 It is notable that power to issue interim injunctions is a discretionary but equitable power, and equity expects the claimant to appease the court with all known material information so that courts may decide on the issue after a fair assessment of the situation. On this point, the court in Eveready v. Sanjay Chadha held that the court would be justified in withdrawing an interim relief if the party in question withheld material information.

In the present case, the court relied on Kishore Samrite v. State of Uttar Pradesh & Ors. to assess the “doctrine of clean hands”  reminding  litigants of their obligations while approaching the court stating “the people, who approach the court for relief on an ex parte statement, are under a contract with the court that they would state the whole case fully and fairly to the court and where the litigant has broken such faith, the discretion of the court cannot be exercised in favour of such a litigant.”  The court then relied on Charanjit Thukral & Ors. v. Deepak Thukral & Ors. to recall that “Where plaintiff does not act bona fidely and does not put every material facts before the Court, the Court is within its inherent power to refuse to grant him injunction, even though there might be facts upon which injunction might be granted.”

On Question of Confusion

The court discussed at length whether modifying the injunction would result in confusion in the minds of the public, relying on FDC Limited, Larsen and Toubro Ltd., S. Syeed Mohideen and other cases. The court ruled that there is nothing in the plaint claiming that any customer was deceived into buying the defendant’s products as that of the plaintiff. The only bone of contention was with regard to geysers, on which the defendant is not seeking modification. The court held that the products of the parties are different, regardless of the same class of registration and also took note of the fact that regardless of the registration by the plaintiff under class 11, it hasn’t produced any evidence towards its use of the mark and neither had done anything to rectify the defendant’s mark, prior to institution of the suit. The court relied on  Vishnudas Trading As Vishnudas and M/S. Nandhini Deluxe and held that “the proprietor of a trade mark cannot enjoy monopoly over the entire class of goods and, particularly, when he is not using the said trademark in respect of certain goods falling under the same class.”

Though the court’s modification of the interim injunction is appropriate, it is perplexing to think that despite virtually reprimanding the plaintiff for approaching the court with unclean hands, the court didn’t take any measures against it. After all, the plaintiff wasn’t manufacturing any water purifiers or RO systems and thus will not be affected by modification in the interim injunction. It was the defendants who were barred from manufacturing and selling their products for approximately 6 months. One recalls the Supreme Court’s order in the Ramrameshwari Devi v. Nirmala Devi (covered here by Shan), where it had expressly held that “If an injunction has been granted on the basis of false pleadings or forged documents (which is very often the case in India) courts must impose costs on the litigants”!

Further, there is another question that the court does not seem to have addressed: As mentioned above, the plaintiff had asked that its mark be declared a well-known mark, a legal term that carries certain connotations. Though the court did not discuss this, it seems to have accepted this in para 8 of the ex-parte injunction, where it says in passing, “…now achieved the status of well known mark”. The present order does not clarify how this came to be, nor whether it still stands in light of new material facts.

Let’s wait and see how the rest of this case plays out!

P.S: I would like to thank Swaraj for his valuable inputs on this piece!