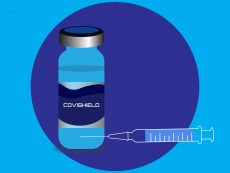 A vial of Covishield vaccine beside a syringe (image from here)

Recently, a Nanded-based pharmaceutical company, Cutis Biotech (‘Cutis’), had filed a passing off suit against Serum Institute of India (‘SII’) for the use of the mark ‘Covishield’. SII has been using the mark for the vaccines manufactured by it while Cutis has been using it for its products such as sanitisers and disinfectants. We had earlier informed our readers about the initial suit filed by Cutis in the Nanded District Court. The suit was subsequently filed in a Pune commercial court which ruled in favour of SII. The commercial court held that Cutis did not have sufficient goodwill and there was absence of any deception by SII’s use, and pointed out the important public interest in the vaccines. Aggrieved by this order, Cutis filed an appeal before the Bombay High Court which was rejected by the court. In this post, I shall analyse the Bombay High Court order in context of its analysis of passing off.

Both the parties in the case had applied for registration of the Covishield marks. However, since neither of them had obtained registration, the dispute was in the nature of a passing off claim. It allows a prior user to seek an injunction if its goodwill has been misappropriated. The classic trinity of the elements to be satisfied for a successful passing off claim are “reputation of goods, possibility of deception and likelihood of damages to the plaintiff” as laid down by the Supreme Court in cases such as Laxmikant V. Patel v. Chetanbhat Shah. I shall deal with each of these factors in order after addressing the court’s discussion on prior user.

Cutis had filed its trademark application on April 29, 2020, for medicinal products while SII’s application was filed on June 6, 2020 for vaccines. Cutis claimed to have coined the term ‘Covishield’ for its pharma products on April 25, 2020, and to have received products such as sanitizers bearing the mark by May 30, 2020, and thereby making it the prior user of the mark. The court, however, found the evidence on this point to be insufficient. As recorded in the order, the evidence included , inter alia, an invoice bearing an entry of ‘Covishield’ without particulars, some post-September 2020 invoices prepared by Cutis itself with some having no names, a certificate of provisional registration, and documents regarding the change of premises and a tax audit. The order does not explicitly specify how documents other than invoices indicated use of the ‘Covishield’ mark. At the same time, it does not provide any specific reason while holding that it did not find “adequate details to establish a prima facie case”.

The court instead held that SII was a prior user. While coming to this holding it referred to inter-office communication at SII regarding purchasing of packaging material regarding ‘Covishield’ dating March 2020 and an endorsement of a printing house. It considered this issue with the broader context of SII’s statements regarding its large scale investment in Covid-19 vaccines which were public knowledge in March-April 2020. Notably, the use by the prior user has to be consistent and not intermittent. The court found SII’s use to be continuous by referring to the various permissions sought by it under different laws and the clinical trials conducted by it. It, however, does not refer to the timelines of the conduct of these trials.

The court seems to have adopted a seemingly contradictory stance in addressing the evidence of both parties. While looking at Cutis’ evidence it states it to be insufficient without providing any reasoning despite the existence of an invoice dating May 2020. Admittedly, it could be argued that this single invoice is not sufficient to show consistent use on part of Cutis, but the court does not explicitly note down this concern. On the other hand, for SII the court seems to have been fine with largely a one-time set of events involving a communication to print packaging material with the ‘Covishield’ mark in March 2020. There is no indication of any further use of the mark until the registration application in June 2020. The public knowledge of SII manufacturing a vaccine cannot itself be considered a ‘use’ of the ‘Covishield’ mark itself. As a hypothetical, what would the situation be if the ‘Covishield’ mark referred to for packaging would have been used by SII for say a chain of sanitizers, and a different term coined for the vaccine? The use of a mark requires it to be associated with a given product which was not shown until the vaccine was officially termed as ‘Covishield’. It is, thus, unclear as to which of the parties should have been considered a prior user based on the consistency of use demonstrated in the evidence as the order is unclear on the same.

For the sake of argument, if it is assumed that Cutis could be considered the prior user, the three factors for a passing off claim are to be satisfied. The first factor is that of the reputation of the plaintiff’s goods. On this count, Cutis “claimed that from 30 May 2020 to 31 December 2020, its turnover was of Rs.16 lakh and it spent Rs.1.2 lakh towards advertisements.” The court noted that while turnover in specific is not always a clinching factor to establish goodwill, the turnover of nearly 2 lakh a month for products such as sanitisers and disinfectants which have been in high demand was significantly low to establish goodwill. This holding has to be seen in the context of the fact that SII is one of world’s largest manufacturers and has a much greater reputation. Even for the Covishield vaccine in specific, by the time of writing of the order, the vaccine sales amounted to nearly Rs 375 crores. It is, thus, difficult to hold that Cutis sufficiently proved existence of its goodwill with respect to its products bearing the ‘Covishield’ mark.

Possibility of Deception and Likelihood of Damages

The factors to be considered to determine the possibility of deception have been laid down in Cadila Healthcare Limited v. Cadila Pharmaceuticals Limited. They include nature of the marks and their resembleness, nature of goods and their character and performance, and the class of purchasers and mode of purchasing. While the two word marks are identical in that they use the term ‘Covishield’, the court rightly held that there is no likelihood of confusion between the products of the two parties. The court emphasised on the drastically different trade channels in that the vaccines can be accessed by citizens only at places designated by the government. Its nature is also vastly different in that it is administered using an injection as against sanitisers and disinfectants sold by Cutis. More importantly, the primary buyers of the vaccines are the government who are directly dealing with the vaccine manufacturers so there remains no possibility of confusing it with plaintiff’s products.

In terms of injury caused, Cutis argued that due to SII’s use of the ‘Covishield’ mark, its suppliers have stopped supplies impairing its growth and damaging its business. It, however, adduced only a single communication as evidence where a trade partner refused supply on 7 December 2020 for an order dated 15 August 2020. The court rightly held this to be insufficient evidence of the harm caused to Cutis since it was a single email exchange with a long gap of nearly four months, raising doubts about its authenticity. In light of any other evidence, it cannot be stated that any damages will be suffered by Cutis and hence a passing off claim was rightly held to be non-maintainable.

Balance of Convenience and Irreparable Injury

Even if it is assumed that a prima facie case of passing off does indeed exist, for a temporary injunction claim to succeed the plaintiff must also satisfy the two factors of irreparable injury and balance of convenience. In the instant case, as noted above, there is no sufficient evidence to indicate any irreparable injury being caused to Cutis if the injunction is not granted. Similarly, on the count of balance of convenience, greater injury would have been caused to SII if the injunction had been granted in light of its large scale investments as well as revenue as compared to any injury caused to Cutis due to denial of the injunction given its comparatively minuscule revenue and investment. Another factor that the court considered while assessing balance of convenience was the impact of an injunction from using the ‘Covishield’ mark on the “Vaccine administration programme of the State.” This is essential given that there will be large scale confusion amongst the masses if the vaccine is not termed ‘Covishield’ anymore and thereby disrupting an already inefficient vaccination programme in India. In such a scenario, the court right considered the wider public interest (a factor considered in several interim injunction applications such as here) in concluding the balance of convenience in SII’s favour.

Despite the possible lack of clarity in the court’s determination of prior user, the court rightly decided to deny an injunction in favour of Cutis. It, however, failed to raise a more fundamental question that Mathews had raised in his earlier piece here that of the protectability of the ‘Covishield’ mark in the first place. As he had argued, there is a reasonable case that can be made out to claim that it is a descriptive mark. In such a scenario, the primary burden on Cutis ought to have been to highlight that it had attained secondary meaning entitling it to protection. This would have been difficult to establish in light of the relatively small revenues of Cutis. On the other hand, SII has a strong case in claiming that its use of ‘Covishield’ has acquired secondary meaning as it is so known in the entire country as well as outside. This discussion would have, thus, led to a position where Cutis’ plea would have been rejected on the ground of absence of trademark protection without going into a discussion of whether passing off has been proved or not.