We’re pleased to bring to you a guest post by Satchit Bhogle. Satchit is a Counsel at the Bombay High Court. He graduated from NUJS, Kolkata in 2016 and completed his LL.M. from Duke University in 2019.

Brands have been active on social media in recent years, trying to imbue their content with human like personality that endears customers to them rather than just putting out traditional advertising. For example, American fast food chain Wendy’s has had its Twitter posts go viral by employing a sassy tone to poke fun at their competitors.

The recent trend has been ‘congratulating’ newsmakers about whom the public has a favourable impression, from athletes to ISRO scientists to (these days) frontline medical staff. But brands play a dangerous game when they use an athlete’s name, photograph, or likeness juxtaposed against their own name and logo when they do not sponsor that athlete. When they do that, they open themselves up to accusations of unauthorisedly infringing on the athlete’s personality rights.

Badminton player PV Sindhu’s success at the Tokyo Olympics surely brought a smile to every patriotic Indian. But the patriotism of FMCG and other companies, entities who have personality and nationality only by legal fiction, is less certain. Immediately after Sindhu won a bronze medal (her second Olympic medal, a rare feat for an individual Indian athlete), even brands that did not sponsor her rushed to post congratulatory messages on social media. As a result, the MD of her management agency, Baseline Ventures, was quite miffed, taking also to social media to call out brands for unauthorisedly using Sindhu’s image. It is also reported that Baseline Ventures is sending out notices to the brands that did so.

The Right of Publicity

Celebrities have a right of publicity, which allows them to file a tort action to restrain the  the unauthorised commercial exploitation of their identity or some distinct attributes of their personality. The landmark judgement in this regard is D.M. Entertainment Pvt. Ltd. v. Baby Gift House. The assignee of the personality rights of famous singer Daler Mehndi sued sellers of dolls made in China bearing his likeness. The Court held that individuals enjoy a right of publicity which protects against the unauthorized appropriation of their persona which would result in unearned commercial gain to another. It laid down the crucial test for plaintiffs, that they must prove that the use of the identity likely misled consumers into believing the concerned personality endorsed the product at issue.

Another important judgement in this regard is Titan Industries Ltd. v. Ramkumar Jewellers, in which Titan, the makers of Tanishq jewellery successfully sued jewellers who had put up posters that were identical to those of Tanishq (except for the name), which included Tanishq’s advertising slogan and, crucially, photographs of Amitabh and Jaya Bachchan, who were brand ambassadors of Tanishq. The Court held, “When the identity of a famous personality is used in advertising without their permission, the complaint is not that no one should not commercialize their identity but that the right to control when, where and how their identity is used should vest with the famous personality. The right to control commercial use of human identity is the right to publicity.”

What is to be noted about these judgements, though, is that they were uncontested: D.M. Entertainment was heard ex parte and in Titan, the plaintiff took an injunction by consent. These judgements therefore lay down the principle, but do not define the contours of the right.

The right was tested in Shivaji Rao Gaikwad v. Varsha Productions in which the defendant produced a film titled ‘Main Hoon Rajinikanth’. The defendant contended that the name ‘Rajinikanth’ could not be monopolised and the use of the name did not necessarily refer to the plaintiff who used it as his stage name to great acclaim. The Madras High Court rejected this argument on the ground that the public would unquestionably identify the name with the plaintiff. Interestingly, the plaintiff produced an interview of the director of the film describing it as a ‘tribute’ to the plaintiff, which the defendant denied, and then argued in the alternative that tribute was paid to many actors (though what kind of tribute one doesn’t know, given that the film was advertised with the line, ‘Hot Kavita Radheshyam As Sex Worker For Rajinikanth’). Though the judge did not cite these facts as reasons for his order, it does raise a question about the role that motive and intention play in the determination of whether or not personality rights have been infringed.

Practically all subsequent reported cases on personality rights have cited D.M. Entertainment and Titan, making it the prevailing test for personality rights. There are two elements to the test formulated by the Delhi High Court: (1) unauthorised use of identity for commercial gain; and (2) likelihood of confusion. This appears to be most similar to the test for passing off in trademark law, whose elements are goodwill associated with the mark (which is similar to the reputation associated with a celebrity’s real or professional name), likelihood of deception, and damages. It is not necessary to prove intention to deceive to establish passing off.

Hence, by analogy, intention ought not to factor in while considering whether a person’s celebrity rights have been infringed, and the focus ought to be less on the tortfeasor and more on the effect that their act may have on the public.

No Clear Lines on Congratulatory Messages

Let us then test some congratulatory messages put out by such brands and see if they pass the test discussed above. 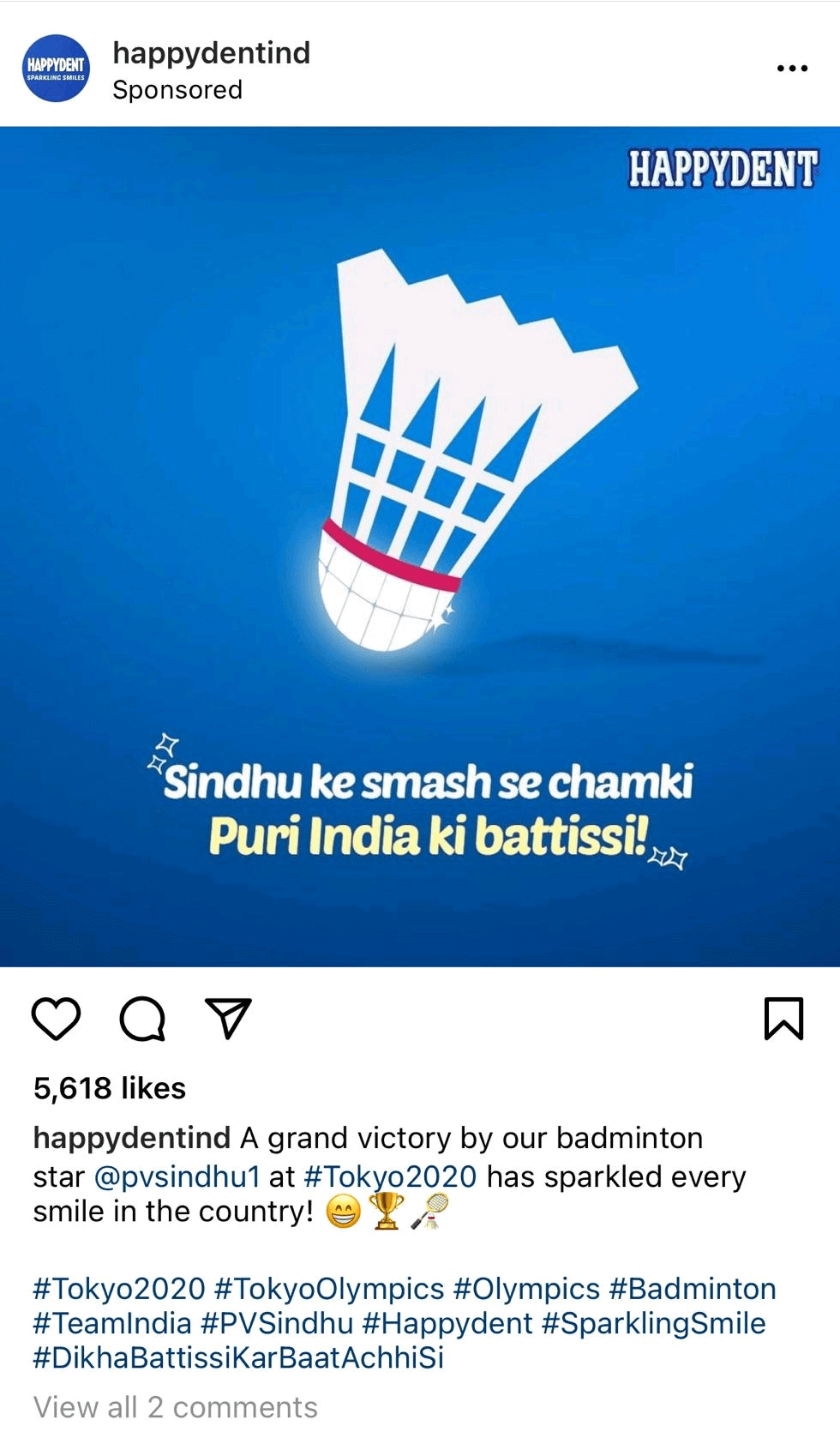 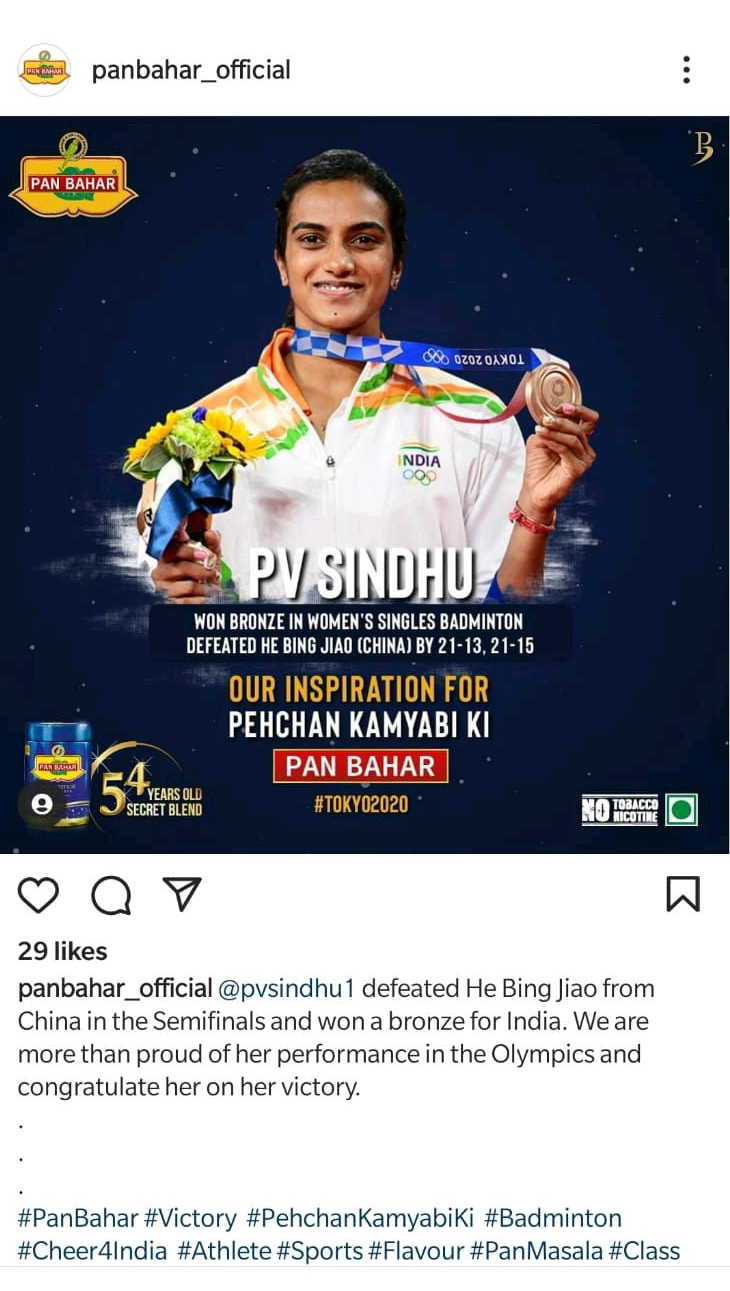 It is not necessary that the public will believe in every case that a brand which congratulates a successful athlete on social media is being endorsed by that athlete. It is quite natural to expect that if the directors of companies mobilise the company’s resources to help the public in times of national crises, they must be able to share in the public’s joy as well. The likelihood of confusion would probably be smaller if for example, the athlete’s name was included among similar others (for our case, perhaps by congratulating all individual Indian medal winners: Mirabai Chanu, Lovlina Borgohain, PV Sindhu, Ravi Kumar Dahiya, and Neeraj Chopra). Further, on social media websites like Twitter, the name of the person posting (the brand or company’s name) and their display picture (typically a logo in the case of companies) inevitably appears. The athlete’s name appearing next to the brand’s name and logo to that extent ought not to lead the public to believe in a commercial connection between the brand and the athlete mentioned in the post.

However, the messages above feature Sindhu’s name (and in one case, image) next to the brand’s name and logo displayed prominently, utilise the brand’s colours (blue and white for Happydent, yellow for Pan Bahar), and even feature the brand’s slogan or keyword used in their slogan ( ‘batti’ for Happydent, ‘Pehchan Kamyabi Ki’ for Pan Bahar). These elements suggest that the use of Sindhu’s name and likeness was purely for their own publicity and gain.

In contrast, let us consider an ad put out by Amul: 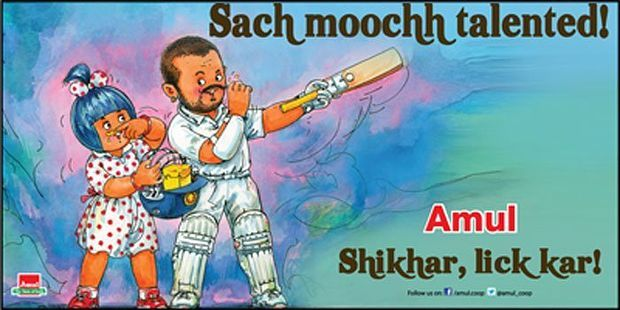 Here, Amul has sought to congratulate cricketer Shikhar Dhawan, identifiable by both his first name and likeness. Amul does not sponsor Shikhar Dhawan or the Indian cricket team. The Amul logo as well as their mascot and an image of their product are prominent. It can be presumed that it is for commercial use. On one hand, a public that over decades is used to seeing Amul ads which comment on the news of the day with likenesses of public figures and always bearing the Amul logo and distinctive art style is unlikely to believe that Shikhar Dhawan is endorsing Amul. This is comparable to a satirical cartoon appearing in the newspaper: the cartoonist and the newspaper are creating and publishing the cartoon at least to some extent for commercial reasons; yet, the context tells viewers that there is no commercial connection with the person being lampooned. An alternate view is that Amul cannot somehow reserve to itself a right to use anyone’s likeness forever by committing hundreds of possible wrongs over the years. This view is strengthened by the fact that Amul was a sponsor for the Indian contingent in the Tokyo Olympics and created ads that were indistinguishable from their usual ads except for a small ‘Team India sponsor’ image. Like in the case of well-known trademarks, the impression created by an Amul ad is something that the court can presume.

Brands will therefore have to be careful and be aware, first, that their eagerness to capitalise on ‘buzz’ around celebrities with whom they have no endorsement agreement may get them sued, and second, that there are no clear lines defining what they can and cannot do. That the celebrity can be identified by the public is a given (and there are many ways to identify a celebrity: in the examples above, Amitabh Bachchan and Daler Mehndi both have easily recognisable voices, while Rajinikanth can be identified from certain looks as well as poses and gestures); but to avoid flying too close to the sun, brands should avoid making their own identifiers too prominent unless they, like Amul, enjoy such a history that their use in that context doesn’t create a large likelihood of confusion.