We’re very happy to bring our readers a guest post that uses a dataset of more than 300,000 trademark examination reports from the year 2019, as the basis for analysing the trademark registry’s examination process. The importance of having and using data while looking at the functioning of the various IP arms of the government is a point that the blog has often harped upon. The current guest post, by Mohit Yadav, a very tech savvy lawyer and founder of Altinfo and DownloadMCA, utilises data for the year 2019, that he has compiled by scraping the electronic register of the Trademark registry. Based on this information, Mohit has put together two guest posts for us. The first part looks at patterns in the trademark applications and oppositions filed in 2019 and highlights certain questions and inconsistencies that are prima facie apparent, and is now available below. The second part will be coming soon. We encourage readers to engage with the post in the comments below. Mohit can also be reached at [email protected].

The recent controversy surrounding Sony’s trademark ‘PS5’ is one of the many lapses by the Registry over the past couple of years. However, such big cases get a disproportionate amount of attention due to the press coverage they gather. There is no study at the present on how commonplace are such lapses in the Registry’s day to day operations. In order to quantify the same and also gauge the effectiveness of the Registry’s examination process, the author built a dataset of 309,189 examination reports that were issued in the year 2019. For the benefit of the reader, the diagram taken from the Trademark registry’s portal describe the entire workflow of an application from filing to its registration. 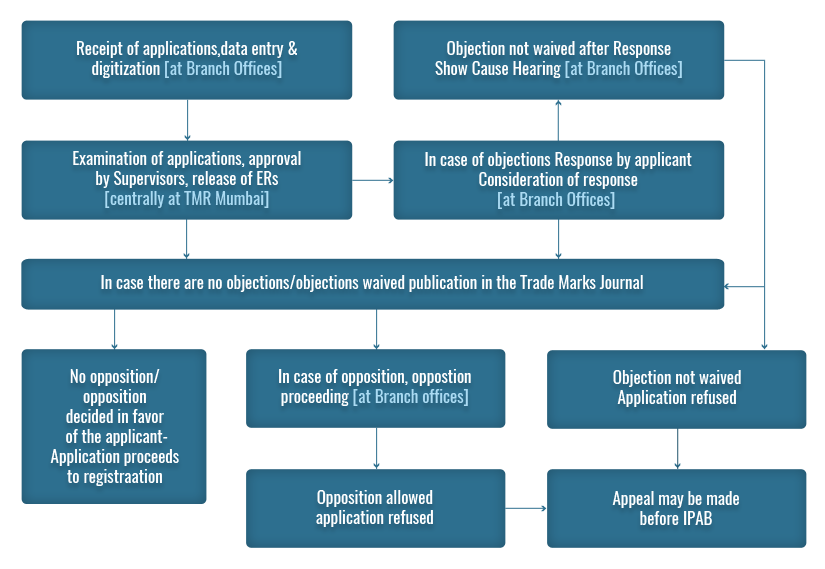 The data for 307,763 (99.53%) marks was scraped during the first quarter (January – March) of 2020 and the data for the remaining 1,426 (0.47%) marks was scraped during the rest of the year.  Considering that the trademark applications are dynamic, with their status changing at a regular interval, it was important to scrape as many as possible with minimal time interval so that inaccuracies do not creep in the analysis.

The distribution of the dataset is provided in Table 1 below: –

Thus, a large number of marks that are objected to, are those which are not ‘unique’ enough (see Section 9) and only a small proportion of opposed marks are objected, due to their similarity to existing marks (see Section 11).  This is good news considering recent empirical studies in the US have shown that they have already reached congestion to the extent that very high barriers exist for new applicants applying for a mark and they have to routinely settle for suboptimal marks as most wordmarks and their popular variants have already been claimed. If India were to be facing a similar situation, then the greater number of objections would have come under Section 11 and not under Section 9.

For our purpose, however, the fate of these applications at the hand of the examiner is of little consequence. The interesting question that remains to be answered is what happens to these applications post the issuance of an examination report with an objection. If marks that are objected to by the examiner continue to remain objected post the applicant’s response, that implies the Registry’s process is efficacious (unless the legitimacy of the entire process is being questioned). On the other hand, if a large number of applications routinely set aside the objection raised by the examiner, then the existing process is not efficacious and needs to be improvised.

Table 3 below provides a categorisation of the ‘objected’ marks in 2020.

Now, if we are to combine the status such as ‘Accepted’, ‘Opposed’, ‘Rectification Filed’, as marks that overcame Registry’s objection, and marks with status ‘Abandoned’, ‘Refused’, and ‘Withdrawn’ as marks that didn’t, we get some interesting insights. Before that, a quick disclaimer that marks with status ‘Abandoned’, ‘Refused’, and ‘Withdrawn’ may have overcome the objection and may have got this at a later stage say that of Opposition, however, the two cannot be segregated further in our dataset, so we will assume that all of them received such status due to Registry’s objection.

First of all, the biggest concern is that 88,122 of these objected marks were examined between January-June 2019 and these marks had been there with registry for atleast 6 months when we scraped them in first quarter of 2020 and yet they were pending disposal.  Overall, 132,416 objected marks (83.24%) were still under process in Q1 of 2020. Even more problematic is the finding that amongst the remaining marks, the 23,388 (14.70%) marks that overcame objection were seven times the number of marks that were refused (3,277 marks – 2.06%).  However, these figures are liable to change, as the majority of the marks were under process and while the possibility of this ratio changing significantly cannot be ruled out, the picture as it is right now is rather problematic.

So far, in my opinion, the analysis of the dataset leads to following: –

The Registry is unable to handle the current workload as can be seen by the fact that even amongst the applications that were examined in the first half of 2019 more than half of them were still pending disposal in first quarter of 2020.

In the eventuality, a mark is objected to, the odds of the examiner’s decision not being set aside are abysmally low, and, hence there is a disproportionate incentive for an applicant to file a response and argue before the Registry. A significant overhaul in the process is required that can provide better preliminary scrutiny of new applications by the Registry. At this stage, an argument that the change in examiner’s decision can be attributed to poor quality of initial filing will not be sustainable. This is because Form TM-A asks for very limited details and the only possibility of a lapse can be of not claiming prior use but otherwise there is nothing technical or complex in the filing that could be improvised by an experienced lawyer. It is for this reason even people with no training such as proprietors can file the trademark on their own without taking the aid of a lawyer.

It remains to be seen whether the backlog is also impacting the qualitative assessment of these trademarks. The disproportionate number of marks overcoming the Registry’s objection points towards this direction but there is a need for a quantitative assessment for determining the Registry’s quality of analysis too. The current findings suggest that the quality of standards are not at the requisite level but a comprehensive analysis is needed to confirm the same and the same will be carried out in a follow up post.

I would like to thank Mayank Sharma, my co-founder in helping build this dataset. I would also like to acknowledge the inputs of Aditya Gupta, Anusha Ramanathan, Gaurav Pathak, Sandeep Rathod, Siddharth Vardhman, and Swaraj Barooah.