We’re pleased to bring you a guest post by our former blogger Aparajita Lath. Aparajita is a lawyer based in Bangalore. She works in a law firm that advises technology companies. The views expressed in this post are personal. Her previous posts on the blog can be viewed here and here. 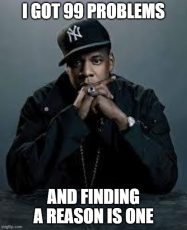 Don’t need a reason to meme, though!

As reported on SpicyIP here, the Supreme Court has held that copyright infringement under Section 63 of the Copyright Act, 1957 is a cognizable and non-bailable offense. In their post, Akshat and Sangita convincingly explain how problematic this decision is and how it will have far-reaching negative consequences.

Being the highest court of the land, a lot is expected from decisions of the Supreme Court – least of all a reasoned judgement. Apart from the issues already raised, another issue with the decision is its lack of reasons and questionable precedential value.

While we all know that the Supreme Court held copyright infringement to be a cognizable and non-bailable offense – why and how did the Supreme Court reach this conclusion? Your guess is as good as mine because the court does not explain this. The judgement on the Supreme Court website is nine pages long. The first seven pages are facts, arguments and statutory provisions. The actual decision is just one paragraph on page seven/eight. Unfortunately, this paragraph contains no reasons and begs the real question:

“5.3. Thus, for the offence under Section 63 of the Copyright Act,   the   punishment  provided  is  imprisonment for  a  term which  shall  not  be  less  than  six  months  but  which  may extend to three years and with fine.  Therefore, the maximum punishment which can be imposed would be three years. Therefore, the learned Magistrate may sentence the accused for a period of three years also. In that view of the matter considering Part II of the First Schedule of the Cr.P.C., if the offence is punishable with imprisonment for three years and onwards but not more than seven years the offence is a cognizable offence. Only in a case where the offence is punishable for imprisonment for less than three years or with fine only the offence can be said to be non­cognizable. In view of the above clear position of law, the decision in the case of Rakesh Kumar Paul (supra) relied upon by learned counsel appearing on behalf of respondent no.2 shall not be applicable to the facts of the case on hand. The language of the provision in Part II of First Schedule is very clear and there is no ambiguity whatsoever.

The Supreme Court has given us so little after so many years – in just one paragraph, it has decided one of the most complicated issues plaguing High Courts for decades. Going line by line – The first line is merely Section 63 (we all know this). The second and third line are probably the only lines where the court ‘holds’ something i.e. that the maximum sentence that can be imposed under S. 63 is 3 years. This was never really in doubt. The fourth line is from Part II of the Schedule 1 of the CrPC – ‘if the offense is punishable with imprisonment for three years and onwards but not more than seven years the offense is cognizable’. The fifth line is again from the CrPC ‘Only in a case where the offence is punishable for imprisonment for less than three years or with fine only the offence can be said to be non­cognizable.’ And that’s it.

The court does not answer the question. The court also does not justify how and why copyright infringement offenses can be grouped with offenses that attract imprisonment for ‘three years and upwards’. It is this grouping that has been the main point of controversy till now. At least some of the previous cases that took this view tried to provide reasons for such a classification e.g. contextual reading along with the scheme of Part I of Schedule 1 shows a trend that favours this view, literal interpretation with justifications, purposive reading along with legislative intent etc. But this decision says nothing at all.

Has this decision passed sub silentio? Salmond explains this concept as below (and it is a principle that has been used by our Supreme Court to devalue poorly reasoned cases):

“A decision passes sub silentio, in the technical sense that has come to be attached to that phrase, when the particular point of law involved in the decision is not perceived by the court or present to its mind. The Court may consciously decide in favour of one party because of point A, which it considers and pronounces upon. It may be shown, however, that logically the court should not have decided in favour of the particular party unless it also decided point B in his favour; but point B was not argued or considered by the court. In such circumstances, although point B was logically involved in the facts and although the case had a specific outcome, the decision is not an authority on point B. Point B is said to pass sub silentio.”

The court presumably decided that copyright infringement cases cannot be non-cognizable because imprisonment can go up to 3 years and may therefore not be ‘less than 3 years’. However, the court did not justify why copyright infringement offenses should be classified as cognizable / bailable. The court should not have decided in favour of this classification unless it also decided how these cases fit within the second bucket i.e. with imprisonment of ‘3 years and onwards but not less than 7 years’ (point B). Copyright infringement cases do not attract imprisonment for more than 3 years / ‘3 years and onwards’ and are punishable only up to 3 years, 3 years being the maximum. Though this point was directly involved in this case and had a bearing on the outcome, since the court did not consider it at all, it could be argued that this issue passed sub silentio and may therefore have limited precedential value.