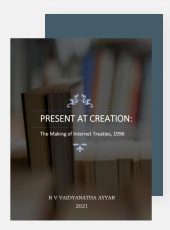 We’re pleased to bring you a post by Prashant reflecting on a book that we’d mentioned recently on the blog – Dr. R.V. Vaidyanathan Ayyar’s “Present at Creation”. As had been mentioned in that earlier blog post, Dr. Ayyar’s 421 paged “Present at Creation: The Making of Internet Treaties 1996” is perhaps the first book that focuses on the negotiating history of the two 1996 Internet Treaties – the WIPO Copyright Treaty (WCT) and the WIPO Performances and Phonograms Treaty (WPPT). Published under a creative commons license, the text is available on his website here. As also mentioned in that earlier blog post, incidentally, Dr. Ayyar had mentioned Prashant as being one of the triggers for the writing of the book! Without further ado:

Some Reflections on “Present at Creation”

In January of this year, Swaraj had written about an open access book titled “Present at Creation: The Making of Internet Treaties” by Dr. Vaidyanathan Ayyar, who as the Additional Secretary in the Ministry of Education represented India during the negotiations over the internet treaties. Swaraj had mentioned in that post that I would be reviewing the book. After having spent some time going through this exhaustive and extensively detailed book which covers everything from the preparatory phase to the actual negotiations during the conference, I have concluded I know too little about the two internet treaties – the WIPO Copyright Treaty (WCT) and WIPO Performances and Phonogram Treaty (WPPT) – to write any meaningful review.  However, I did want to share some of my reflections on this elegantly written book which is an important contribution to Indian scholarship on intellectual property.

To begin with I think accounts such as this book by Indian bureaucrats who have actually participated in negotiations are invaluable, both as research material and teaching aids. The leading bureaucrat/contributor in this regard is Jayashree Watal, a former IAS officer who was part of India’s negotiating team for TRIPS before joining WTO in its IP division. Her book, Intellectual Property Rights: The Way Forward for Developing Countries (2003) is one of the important, analytical and affordable accounts of the TRIPS negotiations and the manner in which the WTO Dispute Settlement Body (DSB) has interpreted TRIPS in various disputes. Another book, which contains personal insights of negotiators from different countries including India, is the WTO publication “The Making of the TRIPS Agreement” edited by Jayashree Watal and Antony Taubman. This book contains personal accounts by A.V. Ganesan, Jayashree Watal and Jagdish Sagar, all of whom present relatively short personal accounts of their experience negotiating the TRIP Agreement in the early nineties on behalf of the Government of India. In contrast, Ayyar’s book which runs into a lengthy and exhaustive 421 pages, weaves his personal account of the negotiations, of the WCT and WPPT, into the theory, history and politics of IP law.

Of particular interest to me in this book was Ayyar’s account of the manner in which the Government of India goes about negotiating IP treaties, starting with its pick of negotiators. Like many other IAS officers who negotiated India’s IP treaties, Ayyar was a generalist with no special knowledge of IP when he was given the responsibility of leading the negotiations. This was because he happened to be the Additional Secretary in the Ministry of Education in charge of “book promotion and copyright” and by default it is bureacurats in this department who are tasked with negotiating on India’s behalf. As a newcomer to the field of copyright, Ayyar’s initial source of information on the internet treaties were papers circulated by WIPO after which he benefited from the advice of Prof. N.S. Gopalakrishnan, who has since turned out to be a staple figure guiding the Government of India in its international IP negotiations. The book contains some very interesting trivia and anecdotes of bureaucratic tussles and politics within the government while crafting India’s negotiating position for these two treaties. It is very clear from Ayyar’s account that TRIPS and the controversy that dogged it cast a long shadow over how the bureaucracy approached issues of IP.

The most striking aspect to me on the issue of negotiating strategy was the fact that the book does not once mention the name of any elected minister and his views on the treaties under negotiations. Save for the cursory approval of Ayyar’s negotiating position by the Cabinet at a meeting packed with other important issues, the book is silent on the position or advice of the Minister in charge. Per the books, the process appears to have been driven entirely by the bureaucracy. In contrast, elected Ministers were very much involved in the fifties and sixties when it came to formulating Indian copyright policy. M.C. Chagla, as the Education Minister, actively guided the process leading up to India’s negotiating position during the contentious Stockholm Conference in 1967 on the revision of the Berne Convention. The Indian delegation in 1967 to the conference was headed by Sher Singh, an elected Minister. From the standpoint of democratic accountability, it is slightly alarming that an elected representative of the people was not more involved in these negotiations which were essentially a law-making exercise. But then again I suspect that this happens more frequently than we know.

Coming to Ayyar’s narration of the Indian negotiating position on the internet treaties, it is clear that this position was nowhere as complicated or confrontational as it was during the Stockholm Conference in 1967 where India was geared for a battle royale on the issue of copyright and its impact on access to knowledge, long before the A2K movement became a thing in the west. As Ayyar explains, the reason for this was because of the government’s view that India had a large software industry and a large movie industry and could hence benefit from acceding to WCT and WPPT.

Ayyar provides a vivid, detailed account of the drafting, lobbying, negotiations and the tension between various lobbies, including between WIPO’s staff and the American delegation. Also included in the book are details of the author’s meetings with Bruce Lehman (the Commissioner of the USPTO), former IAS officers turned lobbyists and members of other delegations. Particularly interesting to me was the discussion on how the Indian delegation led by Ayyar contributed to the unique wording of the “Preamble” of these treaties which is reproduced as follows:

Recognizing the need to maintain a balance between the rights of authors and the larger public interest, particularly education, research and access to information, as reflected in the Berne Convention

This is one of the rare preambles in a multilateral IP treaty to specifically articulate the need to balance the interests of IP owners with “public interest” and has received a fair deal of appreciation from a lot of international academics for helping to restore a sense of balance to the negotiations. This would not be the first time that India pushed for public interest during the negotiations of IP treaties. The Stockholm Revision of the Berne Convention which resulted in the “protocol” to the Berne Convention was also a result of Indian efforts in 1967. Similarly, the compulsory licensing provisions in the TRIPS Agreement were a result of efforts by Indian negotiators, as detailed in Watal’s book. Despite such deft negotiations on the international stage, the Indian bureaucracy often forgets this “public interest” aspect while drafting Indian IP law. For example, when the Copyright Act was amended in 2012 to incorporate the TPM requirement, it criminalized the circumvention of TPMs, despite no such requirement in the WCT. Swaraj has a longer piece on the TPM issue over here.

Despite India not really having any objections to WCT and WPPT after negotiations concluded in December, 1996 the Government of India did not take steps to amend Indian law to address all aspects of WCT and WPPT till 2012 and for some reason did not ratify both WCT and WPPT until 2018.

In any event, Present at Creation: The making of the Internet treaties by Ayyar is a very important account of the negotiations over the internet treaties and well worth a read by both academics and practitioners.