In this post our SpicyIP intern, Gaurangi Kapoor writes on the circular issued by Police Commissionarate, Jaipur on exempting the use of sound recordings during marriage ceremonies.  Gaurangi completed her LLM in IP and Technology law from Jindal Global Law School in 2022. Her current areas of interest are copyright, design and artificial intelligence. 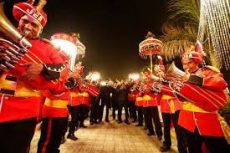 Post-pandemic not only brought back the wedding boom to India but also the associated copyright issues in vogue. Section 52(1)(za) of the Copyright Act 1957 (Act), which exempts playing of sound recordings in weddings and associated events, has made headlines quite a few times in 2022 (see here, here, and here). Recently, the website Eventsfaqs.com published a report that the Police Commissionerate, Jaipur has issued a circular clarifying that no music licence is required to play sound recordings at marriages and associated festivities as it is exempted under Section 52(1)(za) of the Act. I could only find  the Hindi version of the Circular. In case our readers are aware of an English one, request them to please share the same.

“1) The following acts shall not constitute an infringement of copyright, namely, : (za) the performance of a literary, dramatic or musical work or the communication to the public of such work or of a sound recording in the course of any bona fide religious ceremony or an official ceremony held by the Central Government or the State Government or any local authority.

Explanation. — For the purpose of this clause, religious ceremony including a marriage procession and other social festivities associated with a marriage;”

Upon its plain reading, the explanation to the Provision includes social events associated with a marriage, implying that it has a wider ambit within the exemption. Yet at certain instances the High Courts have interpreted “other social festivities” to mean only those events which are conducted to perform a marriage (see here, here and here). The narrow interpretation of the Provision has been covered by Devika here. Our readers might recall that recently in an opportunity to decide a case concerning the Provision, the Delhi High Court had appointed an expert to aid in the interpretation of the provision for its wider implication but could not deliver its judgement owing to the parties decision to settle out of court (see here). The expert, Prof Arul George Scaria, submitted that a broader interpretation of the provision would be welcome wherein marriage related festivities are included within the ambit of the exemption since “performing marriage related festivities according to one’s culture and tradition is a constitutional right under Article 21” (see here). He had further highlighted that such a narrow interpretation can lead to harassment of the family members or event organisers by being subjected to threats of police complaints for using sound recordings during the wedding festivities. In this vein, it is critical to note that the circular by the Police Commissionerate, Jaipur has been issued aiming to resolve this exact problem.

The Circular published by the Police Commissionerate, Jaipur (Circular) is not the first instance where a clarification has been issued.

The Copyright Board issued a public notice in 2019 to clarify that no music licence was required to use sound recordings in religious ceremonies including marriage and associated events (see here). The public notice was challenged at the Punjab and Haryana High Court (P & H HC) in the case of Novex Communications vs Union of India. Quashing the public notice, the P & H HC reasoned that a general interpretation of the Provision cannot be made without considering the facts of each case. The Court reasoned that a blanket understanding of the Provision was contrary to the ruling held in the case Phonographic Performance Ltd vs State of Punjab which exempts live performances of musical works (as well as literary and dramatic works) in the absence of any commercial/ private financial gain. It further found the act of the Copyright Board violative of separation of powers and “an attempt to usurp the legislative power of enactment and judicial power of interpretation.”

So does the executive have the power to issue such a clarification? It’s unclear! Maybe the readers could comment below with their take. Certainty on this is needed especially since the law laid out by the courts is unclear and the power of the executive has once been challenged.

However, given that the police have wide powers and the big fat Indian weddings that often take place at the iconic venues of Jaipur, it is certainly a welcome clarification for the families who are otherwise subjected to unwarranted harassment and threatened with lawsuits. It will (hopefully!) restrict copyright holders from misusing powers of the police to threaten users and extort licence fees (see here). At the very least, it would be giving wedding folks some peace of mind that they would not be rudely interrupted and arrested in the middle of their wedding over an unclear copyright provision!