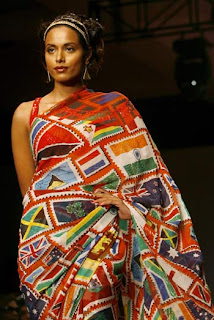 Mrinalini’s post spurred an interesting discussion on piracy and whether it was a plain “evil”, a “necessary evil” or perhaps a “necessary angel”. A recent scholarly article by Professors Rausiala and Springman point out to the “angelic” qualities of “piracy” and proves that it may indeed prove more a boon than a bane in certain industries. Interestingly titled the “piracy paradox”, the abstract is as below:

Yet a significant empirical anomaly exists: the global fashion industry, which produces a huge variety of creative goods without strong IP protection. Copying is rampant as the orthodox account would predict. Yet innovation and investment remain vibrant. Few commentators have considered the status of fashion design in IP law. Those who have almost uniformly criticize the current legal regime for failing to protect apparel designs.

But the fashion industry itself is surprisingly quiescent about copying. Firms take steps to protect the value of trademarks, but appear to accept appropriation of designs as a fact of life. This diffidence about copying stands in striking contrast to the heated condemnation of piracy and associated legislative and litigation campaigns in other creative industries. Why, when other major content industries have obtained increasingly powerful IP protections for their products, does fashion design remain mostly unprotected – and economically successful? The fashion industry is a puzzle for the orthodox justification for IP rights. This paper explores this puzzle.

We argue that the fashion industry counter-intuitively operates within a low-IP equilibrium in which copying does not deter innovation and may actually promote it. We call this the piracy paradox. This paper offers a model explaining how the fashion industry’s piracy paradox works, and how copying functions as an important element of and perhaps even a necessary predicate to the industry’s swift cycle of innovation. In so doing, we aim to shed light on the creative dynamics of the apparel industry.

Although published in 2006, the New York Times catches up with this interesting piece of scholarship only now. I reproduce extracts below:

…..copying has remained ubiquitous in the fashion industry. Fashion-forward but low-priced retailers like H & M and Zara have flourished, thanks to their ability to take designs from Milan to the mass market. Private-label designers for major department stores trumpet the fidelity of their imitations. And almost as soon as hot new designs appear on the runway, photographs and drawings of them are on their way to Chinese factories that can produce reasonable facsimiles at a fraction of the cost. Designers’ frustration at seeing their ideas mimicked is understandable.

But this is a classic case where the cure may be worse than the disease. There’s little evidence that knockoffs are damaging the business. Fashion sales have remained more than healthy-estimates value the global luxury-fashion sector at a hundred and thirty billion dollars- and the high-end firms that so often see their designs copied have become stronger. More striking, a recent paper by the law professors Kal Raustiala and Christopher Sprigman suggests that weak intellectual-property rules, far from hurting the fashion industry, have instead been integral to its success.

The professors call this effect “the piracy paradox.” The paradox stems from the basic dilemma that underpins the economics of fashion: for the industry to keep growing, customers must like this year’s designs, but they must also become dissatisfied with them, so that they’ll buy next year’s. Many other consumer businesses face a similar problem, but fashion-unlike, say, the technology industry-can’t rely on improvements in power and performance to make old products obsolete. Raustiala and Sprigman argue persuasively that, in fashion, it’s copying that serves this function, bringing about what they call “induced obsolescence.”

Copying enables designs and styles to move quickly from early adopters to the masses. And since no one cool wants to keep wearing something after everybody else is wearing it, the copying of designs helps fuel the incessant demand for something new. The situation is not necessarily easy on designers, who have to keep coming up with new ideas rather than being able to milk a trend for years. But it means that in the industry as a whole there is more innovation, more competition, and probably more sales than there otherwise would be. And the absence of copyrights and patents also creates a more fertile ground for that innovation, since designers are able to take other people’s ideas in new directions. Had the designers who came up with the pinstripe or the stiletto heel been able to bar others from using their creations, there would have been less innovation in fashion, not more.”

The IP “negative space” is not just limited to the fashion industry, but extends to other things like magic. In a recent paper by a Yale law student titled “Secrets Revealed: How Magicians Protect Intellectual Property without Law”, the author argues that:

“Intellectual property scholars have begun to explore the curious dynamics of IP’s negative spaces, areas in which IP law offers scant protection for innovators, but where innovation nevertheless seems to thrive. Such negative spaces pose a puzzle for the traditional theory of IP, which holds that IP law is necessary to create incentives for innovation. This paper presents a study of one such negative space which has so far garnered some curiosity but little sustained attention – the world of performing magicians.

This paper argues that idiosyncratic dynamics among magicians make traditional copyright, patent, and trade secret law ill-suited to protecting magicians’ most valuable intellectual property. Yet, the paper further argues that the magic community has developed its own set of unique IP norms which effectively operate in law’s absence. The paper details the structure of these informal norms that protect the creation, dissemination, and performance of magic tricks. The paper also discusses broader implications for IP theory, suggesting that a norm-based approach may offer a promising explanation for the puzzling persistence of some of IP’s negative spaces.”

While I agree with the author’s point that “patents” and copyrights may be inadequate to protect magic tricks, I am a little skeptical on the on the “trade secrecy” issue. It seems almost intuitive that “trade secrecy” should definitely help here–else, all magicians would be replicating the wonderful feats of David Copperfield!

The NY Times concludes by noting:

“The fashion industry is not alone in its surprising mixture of weak intellectual-property laws and strong innovation: haute cuisine, furniture design, and magic tricks are all fields where innovators produce new work without being able to copyright it.

This doesn’t mean that we can always do without copyrights and patents, and fashion has unique characteristics that limit the damage that copying can do: it’s relatively cheap to come up with new designs, there’s a culture of novelty, and people are willing to pay more for the right brands. But we should be skeptical of claims that tougher laws are necessarily better laws. Sometimes imitation isn’t just the sincerest form of flattery. It’s also the most productive. ?”

Certainly something worth thinking about, in all our talk about IP and determining the optimal “tautness” of the IP string in India.