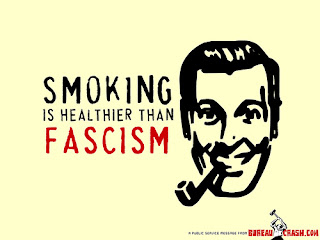 Since I’ve lit up the cancer stick a great number of time till last year, all things relating to smoking interest me considerably. For those of you interested in a discussion on a recent Delhi High Court judgment on the constitutionality of “smoking” bans, see this post of mine at “Law and Other Things”, perhaps India’s leading blawg. This post draws on an editorial piece in the Mint, which I reproduce below:

The law, smoke and mirrors

“I often wonder about the hours when a man sits alone, watching the smoke of a cigarette, thinking. I wonder what great things have come from such hours. When a man thinks, there is a spot of fire alive in his mind— and it is proper that he should have the burning point of a cigarette as his one expression.”

Ayn Rands’ sentiments mouthed through one of her characters in the classic Atlas Shrugged may have spurred some of us to light up. But ought that be reason enough to prohibit the publication of this book in India? Although current legal norms weigh against such censorship of the printing press, it certainly sanctions it when “text” migrates to “screen”. The law vests our Central Board of Film Certification (CBFC) with the discretion to axe any scene that glamourizes or encourages smoking, notwithstanding the fact that such scene may be integral to the plot or to the character. And notwithstanding the fact that the law does not prohibit smoking, unless committed within public precincts.

It is in this context that the Delhi high court’s recent denunciation of a regulation banning the depiction of on-screen smoking is a very welcome one for those of us who zealously guard our free speech rights against an overtly paternalistic state. Justice Sanjay Kishen Kaul rightly notes that such regulation violates the right to free speech and expression guaranteed under Article 19(1)(a) of the Constitution of India.

However, the judgement is problematic in that it implicitly endorses CBFC’s right to interfere with artistic freedom, when the scene in question encourages smoking.

The case centres around a rule (promulgated under what is commonly referred to as the Cigarettes Act, 2003) which prohibited “characters” in films and television programmes from “displaying tobacco products or their use”. A writ petition challenging the constitutionality of this rule came up before justice Kaul. It is very difficult to take exception to justice Kaul’s staunch defence of the freedom of speech guaranteed under Article 19(1). However, his reasoning leaves much to be desired.

Article 19(2) permits the state to intrude upon the right to free speech when such intrusion is “reasonable” and is in the interest of any of the following: the sovereignty and integrity of India, the security of the state, friendly relations with foreign states, public order, decency or morality, or in relation to contempt of court, defamation or incitement to an offence.

It is difficult to see how the banning of on-screen smoking would fit within any of the above heads. Although one may qualify measures to discourage smoking as “public health” measures, this cannot tantamount to preserving “public order”.

As for “decency” and “morality”, the less said the better. The closest I ever came to witnessing such a nexus was when a student of mine categorically asserted that “civilized people do not smoke”.

Without dealing conclusively with whether or not the impugned ban fitted within any of the above heads, justice Kaul assumed that even if it did, it would still not amount to a “reasonable” restriction. Particularly since there already existed another guideline under the Cinematograph Act, 1952, that permitted CBFC to chop “glamourized” smoking scenes. In other words, an outright ban on “any” smoking scene was “unreasonable”, whereas a ban on only “glamourized” smoking scenes was perfectly constitutional. But this begs the question: Do such bans fall within the purview of the Article 19(2) categories at all? Unless they do so, one need not bother examining their reasonableness or otherwise.

Although the legality of the CBFC guidelines was not in issue, justice Kaul implicitly defends them. It is therefore imperative that film-makers take steps to challenge the constitutionality of these guidelines.

On a broader note, if our zealously paternalistic state is worried about the ill effects of smoking, it must take on the tobacco lobbies and ban smoking altogether (as to whether such a measure is likely to withstand a constitutional challenge is a moot issue). But until then, a film-maker must be offered the artistic freedom to depict the iconoclastic Hank Rearden lighting up his cancer stick in as swashbuckling a manner as possible. Even if this necessarily means more smoke-filled lungs and the encouragement of a habit described by James I as “loathsome to the eye, hateful to the nose, harmful to the brain…[and].. dangerous to the lungs…”