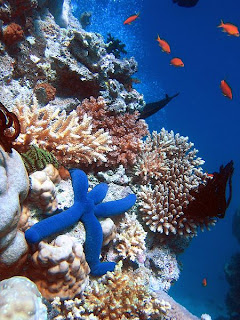 Of late the print media has featured several stories of India taking up a leadership position in Biodiversity Conservation. A recent press release has stated that India will be spearheading the developing country perspective in the upcoming 10th Conference of Parties (CoP) to the Convention on Biodiversity scheduled to be held at Nayoga in October 2010. The main agenda of this meet is the adoption of an international protocol on Access and Benefit Sharing. India is also hosting the next meet in 2012.
Photo Credit: Richard Ling – can be accessed at www.rling.com
Such a protocol, on Access and Benefit Sharing, would be extremely beneficial to countries like India and Brazil which are mega bio-diversity zones and whose people have the potential to profit handsomely from such diverse biological resources. A protocol on Access and Benefit Sharing (ABS) would require the comity of nations to put in place an international mechanism to ensure that corporations and persons, benefiting from the use of local genetic or biological resources, share with the local communities the benefits that have accrued to them through the use of their knowledge and biological resources.

An international protocol of this nature seems to be rather distant now especially since developing and developed countries are finding it impossible to arrive at a consensus even on relatively lesser controversial issues of disclosure requirements in patents and prior informed consent (PIC).

This proposal was crystallized in a follow up submission (WT/GC/W/564) by India and other bio-diversity rich countries, made on the 31st May, 2006. In this submission, developing countries sought to introduce a new provision – Article 29 bis titled ‘Disclosure of Origin of Biological Resources and/or Associated Traditional Knowledge’. This proposed provision aims to make disclosure requirements a TRIPS obligation.

The U.S. delegation however has opposed the proposal through its submission – IP/C/W/434 – on the ground that such measures “would add uncertainties in patent rights that may undermine the role of the delicately balanced patent system in its primary purpose of encouraging innovation, technological progress and economic development.” The U.S. is one of the few countries which despite signing the CBD has failed to ratify it due to the political climate in the U.S. Senate. In its submissions the U.S. has stated that it is in complete agreement with the principles of (i) Prior Informed Consent (ii) Benefit Sharing & (iii) Prevention of Erroneously Granted Patents. The U.S. however was of the opinion that this could be achieved either through contract law or a completely independent mechanism which has no nexus with the Patent system. The reality as usual lies somewhere in-between.

Regardless of the controversy between the U.S. and India it is necessary for the Government of India to take a stand on what exactly it means by Prior Informed Consent. Does it mean the Prior Informed Consent of the nation-state or that of the community preserving and maintaining the biological resources that are being used. Currently the Biological Diversity Act, 2002 provides for the prior informed consent of the Indian State and not the local communities who are the ones protecting and preserving the biological diversity of their surroundings.
For those of you interested in viewing all of India’s submission please visit the website of the Ministry of Commerce over here for an excellent database on all of India’s submission.