Prateek Bhandari is a fourth year student of NUJS, Kolkata. He is the Co-founder & Manager (Website Development & Finance) of Lawctopus. In the light of various judgments on commercial disparagement, he analyses the possible violations committed by McDowell’s advertisement which was, however, later withdrawn.

If you thought the cola wars are losing the fizz, check out what could have snowballed into a high ‘spirited’ new edition- Whisky Wars! UB Spirits launched a television commercial that depicts MSD mocking Harbhajan Singh’s Royal Stag commercial. Pernod Ricard’s Royal Stag and UB’s McDowell’s No. 1 are rival whisky brands. The commercials are however of cricket gear and soda because of restrictions on advertisement of alcohol.

The subject of disparagement has been briefly touched upon in the context of Britannia successfully restraining Unibic from disparaging its “Good Day” biscuits. There, Unibic was restrained from showing a commercial with the tagline, “Why have a good day, when you can have a great day?” which was an apparent mockery of rival Britannia’s ‘Good Day’ biscuits.
The New International Webster’s Comprehensive Dictionary defines disparage/disparagement to mean, “to speak of slightingly, undervalue, to bring discredit or dishonour upon, the act of depreciating, derogation, a condition of low estimation or valuation, a reproach, disgrace, an unjust classing or comparison with that which is of less worth, and degradation.” The division bench of Delhi High Court in Pepsi Co. v. Hindustan Coca Cola said that for disparagement three-pronged test of (1) intent (ii) manner and (iii) story-line and the message sought to be conveyed needs to be fulfilled. If the manner is ridiculing or the condemning product of the competitor it amounts to disparaging.
In one of the two commercials which were the essence of the Cola wars case, Salman Khan while conducting a Grow Up to Thums Up Challenge asks a boy from the audience to give his preference of cola drink. When the cover from the ‘sweet’ bottle (referring Pepsi) is removed the boy puts his hand on his head in an expression of denial and the crowd boos the drink. By referring Pepsi as “Woh meethi hai, bachon ko meethi cheezein pasand hai” (that one is sweeter and thus kids would like it) and “wrong choice Baby”, Thums Up (a Coca-Cola brand) depicted the commercial in a derogatory and mocking manner. The court did not treat it within the ambit of permissible puffing up. The court held that puffing one’s product by comparing others’ goods and saying his goods are better is not an actionable claim but when puffing or poking fun amount to denigrate the goods of the competitor, it is actionable. The court observed that the choice of Pepsi (‘Pappi’ used in the commercial) between Pepsi and Thums up has been projected as a “wrong choice.” The court held that by projecting so Salman Khan in the commercial conveys in a sophisticated way that Pepsi is rubbish.
Mahi’s commercial for McDowell’s has a Bhajji look-alike mimicking, “Have I made it large?” and Dhoni ridiculing him by saying, “If you want to do something in your life, forget large, do something different, pal.” In the present case, the commercial does not rubbish Royal Stag directly. However, the adoption of the phrase “forget large” clearly refers to Royal Stag whisky. The sophistication adopted in the term “forget large” does leave the question as to whether the commercial denigrates Royal Stag open-ended. I am of the opinion that if the court construes “wrong choice” as derogatory then “forget large” should also be pegged into the same species.
Copyright violation of Tagline 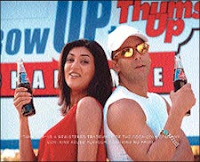 The Royal Stag commercial featuring Bhajji shows his journey from a ball-bearing factory to a cricketer and has the catch phrase “Have I made it large?” Mahi’s commercial for McDowell’s makes use of mimicry to express “Have I made it large?” and then the question posed is ridiculed by Dhoni’s words “forget large.” Would this be a copyright infringement?
In the Cola wars case question arose regarding infringement of copyright of literary work of the Pepsi namely the phrase “Yen Dil Maange More.” The Thums Up commercial shows Salman Khan asking “Kyo Dil Maange No More?” It was contended that the phrase has been exclusively associated with Pepsi and is fully reminiscent of Pepsi’s business. It was contended that to popularise the phrase Pepsi had spent mints on the advertising theme and it was a successful theme in India and had acquired distinctiveness and association with Pepsi. In another version Salman says “Wrong choice, baby” which is also a rip-off from “Yeh hi hai right choice, baby.” In another rip-off, Sushmita Sen shouts “Yeh hi hai Right Choice ko….” and the crowd erupts “nahi” (No to right choice). In yet another commercial, Pepsi’s limited edition lemon-flavoured drink, Aha is ridiculed and the children yell “Naha” (No) to Aha.
The Delhi High Court basing itself on the de minimis rule held that advertising slogans are prima facie not protectable under the Copyright Act as they are not substantial literary works. They may however be protected under the law of passing off. Thus, we can conclude that the Royal Stag slogan is not capable of copyright protection w.r.t. taglines.
Copyright violation of Cinematographic film
In the case, Pepsi also pleaded that another commercial, the Roller Coaster commercial, had been copied by Sprite (another Coca-Cola brand) which amounted to infringement of copyright. In the Pepsi commercial a boy takes a glass of Pepsi to a roller coaster and the drink doesn’t spill out during the ride. However in the Sprite commercial after a similar chain of events Sprite spills out and makes the boy an object of laughter. The message which the Sprite commercial gives is ‘Bujhaye only pyaas, baaki sab bakwaas’. (Quenches thirsts, everything else is worthless).
Section 14 of the Copyright Act defines “copyright” as the exclusive right… to do or authorise the doing of any of the following acts in respect of a work or any substantial part thereof, namely:
(d) In case of a cinematograph film,-
(i) to make a copy of the film including a photograph of any image forming part thereof;
(ii) to sell or give on hire or offer for sale or hire, any copy of the film, regardless of whether such copy has been sold or given on hire on earlier occasions;
(iii) to communicate the film to the public….”
Supreme Court in the case of R.G. Anand v. Deluxe Film observed that ” the fundamental fact which has to be determined [is] whether or not the defendant not only adopted the idea of the copyrighted work but has also adopted the manner, arrangement, situation to situation, scene to scene with minor changes or super-additions or embellishment here and there. Indeed, if… defendant’s work appear[s] to be a transport rephrasing or a copy of a substantial and material part of the original, the charge of plagiarism must stand proved…”
The court held that Coca-Cola’s roller coaster theme is a copy of Pepsi’s theme which was its original work and therefore covered under Section 14. The court also noted that the dress of the boys in the commercial was similar. The court held the replica commercial in the instance case was nothing but a substantial literal imitation of the copyright work of the appellant with some variations here and there and a different last portion. The court held that since the commercial is a cinematograph film as defined in Section 2(f) the use of the elements of the commercial for promoting Sprite violates and infringes the copyright of Pepsi under Sections 51 & 52(A).
In the Whisky Wars too, the entire theme of the commercial and the sequence of events point out towards the Mahi commercial being a copy of Royal Stag’s commercial. Both the commercials show a similar factory, workers moving objects in vicinity and Harbhajan and his look-alike wearing hoods, In fact, both the commercials have a similar storyline and begin with the same line- Papa (ji) ki ball bearing factory main pehla din aur samne khada tha ye sawal ‘have I made it large?’ (First day at father’s ball-bearing factory, and puzzling me was the question, ‘have I made it large?’) Even the music employed is merely a slight modification. This bears witness to the copyright violation of the Roller Coaster cinematographic film.

As far as the pleading of Coca-Cola in the Cola wars case, that Cola Wars is a matter of trade rivalry and thus a market place matter alone which ought not to spill over to the court of Law, is concerned, the court made it clear that market place is not a suitable substitute for injunction by courts. Pepsi also contended that in campaigning for the commercial they had spent lot of money and that the commercial had acquired a special significance and had been associated with Pepsi. It further said that the shell life of a commercial is for a year or so and if interim injunction is not granted against the use of the Coca-Cola commercial, it will have far reaching consequence of defeating the purpose for which the campaign was launched.
The Whisky issue has however been doused by withdrawal of the commercial by UB Spirits. However, you can savour the two whiskies and quench your thirst at: http://www.youtube.com/watch?v=Jp9ZU-E5qBU (Royal Stag’s original featuring Harbhajan), http://www.youtube.com/watch?v=s1Ux8MKQTaw (McDowell’s freshly fermented featuring Mahi) & Aah! Teetotaller? Visit http://www.youtube.com/watch?v=Da7RF_ig308 (One of the Thums Up commercial which was under dispute in Cola wars case).