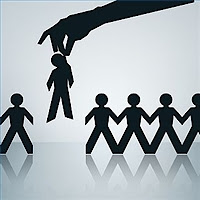 In a landmark decision on the 24th of November, 2011, the Central Information Commission (CIC) has recommended disciplinary action against an errant Central Public Information Officer (CPIO) for repeatedly violating the provisions of the Right to Information Act, 2005. The decision of the CIC can be accessed over here. We were pointed towards this decision by an anonymous commentator who left a comment on an earlier post of ours involving the same CPIO. Image from here.
The Central Information Commission hears appeals and complaints against CPIOs of the Central Government who unlawfully deny information requested for under the RTI Act. The CPIO in this particular case is the same CPIO who was fined a sum of Rs. 25,000 by the CIC just a few months ago. In the present case the CPIO had once again denied the applicant information without any cogent reasons. Two such unsubstantiated denials within the same period of time are obviously bound to raise eyebrows.
The CIC notes that the repeated errant conduct of the CPIO required a punishment greater than a fine and therefore ordered the Controller General of Patents, Trademarks and Designs to initiate disciplinary action against the CPIO. In pertinent part the CIC notes in its order:
“The Commission feels that such lackadaisical attitude of the Respondent CPIO cannot be changed by merely levying penalties one after another, under Section 20 (1) of the RTI Act. The citizenry is concerned with access to information at the end of the day and if an officer such as the CPIO, who is otherwise appointed to act as a statutory facilitator for providing information to the citizenry, starts acting like a resistor instead; then the citizenry will have to eventually suffer. Such a situation must be prevented from arising or subsisting and therefore, the background leading to the present case demands disciplinary action against the Respondent CPIO.”
This decision of the CIC is an extremely welcome decision and will hopefully serve as a deterrent against any future misconduct by errant CPIOs. The appeal leading to this decision was filed by Mr. Mohan Vidhani, a respected IP attorney practicing in New Delhi. The earlier appeal against the same CPIO was filed by Advocate Kamal Kishore Arora. It is heartening to see the IP bar finally taking up the cause of the RTI Act and moving ahead with such determined action against the erring officers. A few more courageous lawyers like them will ensure that the system cleans itself up in no time.