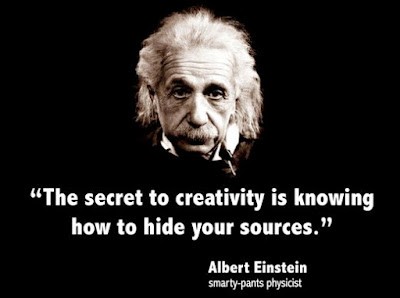 A wise inventor named Edison once remarked that genius was “one percent inspiration and 99 percent perspiration”. Since then, this pearl of wisdom has been handed down from generation to generation and preached several times over by parents, teachers and employers. I’ve always felt that this would have made for a great advertising line for any of the deodorants that we see around us (what better way to rid oneself of all the smell that comes from genius(y) perspiration). But I digress.
The reason I bring up this catchy maxim is to reflect on Prashant’s post outlining a partial restraining order against Urumi, a malayalam movie produced and directed by the legendary Santosh Sivan. Unfortunately, the haunting “Aaro Nee Aaro” melody accompanying a rather intimate visual between the lead stars was copied without attribution from a Canadian Celtic singer. Since then, Deepak Dev, a Malayalam music composer responsible for the unacknowledged borrowing, has been at the receiving end of several diatribes from fans that felt immensely let down. I’m getting the sense that several of them are upset, not so much at the copying, but at the fact that the source was hidden and not attributed. And this brings me to a key policy issue for discussion: should we encourage such copying, provided adequate credit has been provided to the original composer? For, after all, some of these borrowings can involve a fair bit of creative adaptation and may invoke a completely different cultural setting and imagery than the original.

It bears noting that almost all of our major music composers have been subject to this charge of copying, even names as revered as AR Rahman. And the borrowings have been largely non-discriminatory, with no nationality being spared: English, American, Korean, Turkish…you name it. The only place where I am yet to spot a borrowing from is the tiny island of Tuvalu–but perhaps its only a matter of time before an islandy tune finds its way into the consciousness of one of our composers waiting to be inspired….

1. The raunchy “Munni Badnam Hui”, copied from a 1992 Pakistani number. Umar Sherif, the original composer says he was more surprised than angry when he came to know of the copy….however, our very own Lalit-ji refuses to acknowledge the copying, making this one painful badnaami that no Zandu balm can cure.

2. “Teri Meri Prem Kahani”, from the latest Salman hit (Bodyguard), is a clear copy of a 15th century Romanian carol, made famous by an angelic rendition by Cleopatra Stratan, when she was all of 6 years old! Here again, Himesh “nasal” Reshamiyya insists that there is no copying and that this is an original “raag” based melody. Given the money this song has been raking in, one might say that this has all the makings of a true “raags to riches” story! The most intriguing part however is that he attributes the melody to Salman Khan, claiming that Khan called him one early morning to hum out the tune …well, you have to give it to him: he can be quite creative when it comes to story telling.

3. Tamally Maak from Egyptian composer Sherif Tag and performed by Amar Diab, a leading Arabic rockstar. This was transformed by the inimitable copy cat, Anu Malik to a murderous “Kaho Na Kaho”. And this is not the first time that dear Diab has been at the receiving end of Indian cinema (his earlier number Habibi was suitably lifted by the Mallus in Chandralekha).

4. Pehli Nazar Mein (from the movie “Race”) copied from a wonderful Korean song.

My all time favourite however is the Lambada tune made famous by the French band, Kaoma. This appears to have its origins in a Bolivian number and underwent several adaptations before it found its way into the creative consciousness of Jennifer Lopez who used it to hit the dance floor with a certain pit bull. And here again, Bollywood was not far behind: Bappi Lahiri cashed in on this famous tune in a 1990’s Bollywood blockbuster, Ghayal starring Sunny Deol and Meenakshi Seshadri.

I could go on and on… as the history of our music industry is replete with lifts from some tune or the other. And perhaps this is what the now deflated Adnan Sami was really driving at when he belted out “Thodi Si To Lift Kara De”?

For those of you interested in uncovering more lifts, try the fabulous itwofs, a resource created with painstaking effort and diligence by Karthik. Something that truly deserves our kudos!

And this brings me back to the policy issue I had raised at the start of the post: should such copying/borrowing be encouraged or ought we to nip it in the bud? I throw open three tentative suggestions in this regard (with the first one being a technological solution and the other two being legal ones):

1. Firstly, I propose that music composers be provided an opportunity to check their tunes against previous similar sounding versions. In other words, we need a smart tech savvy person with an interest in music to come up with a product that enables such cross checks. Any such product will certainly not starve for want of a market. For not all copies are conscious copies, and conscientious composers may find themselves at the receiving end, simply because they have no idea that their tune is an unconscious copy or adaptation of something they heard earlier! Perhaps there already exists such a product (and if so, please do share details in the comments section).

2. Secondly, I propose that irrespective of whether or not the copyright in a tune has expired, every borrowing be acknowledged and attributed. The challenge is to convert this to a specific legal obligation with definite bounds susceptible to easy enforcement. I am reminded of the patents regime, where every patent application has to necessarily disclose prior art that it draws from. Ought we to have a similar obligation to disclose musical borrowings (and make copyright protection contingent upon such disclosure)? Would this be feasible?

3. My third proposal is that every composer be free to borrow or lift any copyrighted tune, provided royalties are paid to the original copyright owner. In short, we institute a compulsory licensing scheme! It bears noting that we already have such a scheme for straightforward copies, which go by the name of “version recordings”. A scheme that made T series what it is today (of course, there was a fair bit of royalty-less copying as well, but we’ll leave that aside for the moment).

Section 52(1) (j) provides that anyone is free to reproduce their own version of a copyrighted song after two years of the song being on the market, provided royalties (currently, it is 5% of sales) are paid to the owner of copyright in the song (music and lyrics). The most recent copyright amendment bill (whose fate is expected to be decided this winter in Parliament) contains an amendment to this provision. Surprisingly, this amendment has received very little attention thus far. In fact, it is not even clear as to how the proposed amendment came about and at whose behest and one may need to file an RTI application to locate its genesis. But we’ll leave that enquiry for a later date (thanks to Nikhil Krishnamurthy for pointing me to this problematic secret history).

I find it a bit paradoxical that when straightforward copying is encouraged under such a “version recording” scheme, adaptations (which involve more work) are not. This can be rectified with a simple stroke of the legislative pen. However would such a compulsory licensing scheme be desirable? Given my partiality towards compulsory licensing, I may count as being a bit biased in this regard.

More problematically, I am also partial to copying, particularly where there is some creative adaptation. I find that many a time, it takes a copy to appreciate how much better the original version was. And more importantly, but for such copycats, I may never have discovered the original artist in question. Thanks to Deepak Dev, I found Loreena McKennitt, and have not stopped listening to her ever since. Lastly, as is the case with Urumi’s “Aaro Nee Aaro”, copies are capable of evoking a very different imagery than the original. There is something to be said for the fact that raw pieces of art or music often have little meaning outside of the cultural context in which they situate themselves.

And all of this brings me back to the maxim that I began with–is genius really one percent inspiration? With Bollywoods’ rampant inspirational escapades, one might need to reverse the proportions and adapt this Edisonian edict to “Genius is 99 inspiration and one percent perspiration”.