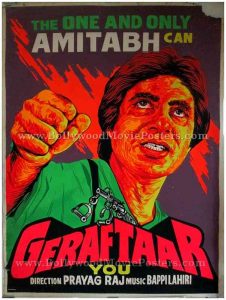 In a rather rambling blog post on Monday, Mr Amitabh Bachchan, Bollywood’s angry young man turned angry-preacher-from-the-social-media-pulpit, let loose a diatribe against the seeming injustice done to him by the Indian Copyright Act – specifically, the concept of copyright terms – which temporally limit rights in original copyrighted work, beyond which the works is included in the public domain. The motivation for the post seems to be the realisation that the copyright in Harivansh Rai Bachchan’s poetry, currently with his estate, is not eternal. In India, the term after which copyright protection in a literary work ceases to exist is 60 years from the death of its author(s), which indicates that Mr. Bachchan’s grouse relates to a (catastrophic) event taking place after the year 2063. (Mr. Harivansh Rai Bachchan died in 2003).

While the post is somewhat incomprehensible (albeit entertaining for its use of inflection), the crux of Mr Bachchan’s argument can be broken down in three arguments:

“my and mine of family will and shall and must have its creative consent before its usage and exploitation after .. that is my inherited right .. it shall prevail ..

“you never made them aware of copyright protection .. and because you did not, how have you reached a conclusion that they would have agreed ..

just because they were unaware of the assumed Law, you have taken advantage of situation and given their works to them that have no right authority by the rightful presence of genes ..

why was not William ‘Bill’ Shakespeare made aware of copyright ; why not Mr Beethoven or Messrs Chopin and Tchaikovsky, or closer home Gurudev Rabindra Nath Tagore ‘Thakur’ .. had they known or made to know, they may never have wished for any other, but their progeny of generations to come … and because no record has been kept of such .. there is a LOSS OF OPPORTUNITY for them that were rightful heirs of them .. !!”

“so what gets left as natural heir by Father Dr Harivansh Rai Bachchan, after his passing passed 60 years, belongs no longer to his domain or possessive copyright as willed .. but becomes for the entire Universe to tread, scratch, mutilate, use in commercial consideration on their own creative discretion .. ???”

In this post, I would like, to put it in Mr. Bachchan’s own words to “OPPOSE, DISAGREE, LAMENT, DISPUTE, BE IN VARIANCE OF, IN VEHEMENT LOUD SCREAMS OF VOICE .. EVER” (sic), with his arguments.

The False Equivalence Between “Real” and “Intellectual” Property

Property rights  denote the allocation of a bundle of rights in a manner so as to make the most  efficient use of that property. In the case of real (physical) property, the use of a physical good by one person diminishes the quantity of that good available for someone else, and therefore the most (economically) efficient allocation of the good is by limiting its availability and use. On the other hand, ‘intellectual goods’ are ‘non-rivalrous’ – they are not limited in quantity and can be freely reproduced and used by anyone without losing their inherent value.

Another distinguishing aspect between intellectual and real goods is the relative difficultly in excluding the use of the former as compared to the latter. While (most) real goods can be excluded from others by physically preventing them from using it, intellectual goods can be replicated and used with much more ease. The difficulty in exclusion makes such creative goods easier to copy and use. This, in turn, leads to the problem of free-loading of resources – the use of a resource for self gain, while diminishing (or at least, not contributing to) the value of that good. Copyright piracy, for example, is often used as an example of the use of creative goods without making any compensation to the creators of such work.

Such free-loading of creative goods is often viewed as reducing incentives for their creation, because it is assumed that creators do not have any incentive to create new goods when they get no direct benefit from its creation (counterview here). Therefore, a common rationale for intellectual property rights is to prevent freeloading by allocating property rights through legal fictions, in order to incentivise the creation of such goods by securing economic incentives for such works.

This system of exclusion is, however, economically inefficient, as the scarcity introduced by preventing the use of intellectual goods is artificial, and excludes uses of such goods which do not diminish its value. Moreover, the primary rationale for the law remains that of increasing the availability of scientific and cultural goods in society, not merely of securing rights of creators or authors. This is why we have exceptions and limitations to copyrights, such as fair dealing or fair use, for example under Section 52 of the Copyright Act, which are also recognized in international treaties like the TRIPS agreement and the Berne Convention.

To conflate two ideas of real and intellectual ‘property’, as Mr. Bachchan has done, is therefore disingenuous and ignores the significant differences between rivalrous and non-rivalrous goods and the nature of intellectual property laws.

However, this argument is ontologically incorrect, and, in my opinion philosophically flawed (counterview here). In fact, the history of copyright law, and its subsequent evolution shows that copyright is a relatively recent concept. Copyright was a extremely limited privilege granted to authors – the first such statute enacted in India only granted copyright for the author’s life plus seven years, and in no case exceeding a total of 42 years. Further development through the ages, and international harmonisation of copyright regimes has only extended such terms (the Berne convention, for example, mandates a minimum term of 50 years). Therefore, whether for ‘Bill’, Tagore or Harivansh Rai Bachchan, copyright terms for their works have only increased – which also indicates that longer copyright terms may not necessarily provided greater incentives for creative or scientific production.

Whether creative works should be seen as a natural right of the creator has been a much debated topic since the inception of the concept of intellectual property rights. Suffice to say, there is a long way to go for this debate to be settled in India, let alone in the annals of philosophy. My personal opinion, however, can be summed up by this quote from the Delhi High Court’s DU Photocopy Case judgement –

“Copyright, [e]specially in literary works, is thus not an inevitable, divine, or natural right that confers on authors the absolute ownership of their creations. It is designed rather to stimulate activity and progress in the arts for the intellectual enrichment of the public. Copyright is intended to increase and not to impede the harvest of knowledge. It is intended to motivate the creative activity of authors and inventors in order to benefit the public.”

In Defence of the Public Domain and Narrow Copyright Terms

Copyright terms, similarly, were seen as necessary in order to strike a balance between creating adequate incentives for the production of intellectual goods, and contributing to a robust public domain – that sphere which ensures the availability of the public to intellectual goods, free of encumbrances of copyright, after the expiry of a certain period of time, or under certain other conditions.

The public domain plays a crucial role in society. The removal of barriers to the access of cultural and scientific intellectual goods enriches society in a myriad ways – greater access to cultural and scientific goods allows the creation of new knowledge which builds on existing information; it allows incremental innovation from such goods; increases individual’s attainment of happiness and a good life, and decreases the costs of obtaining information by making such ‘borrowing’ permission-less.

Mr. Bachchan’s view of the public domain is needlessly pessimistic. This is not, in fact, the first time that Mr. Bachchan has been wary of the use of his father’s work without his permission. In 2017, he sent a legal notice to poet-turned-politician Kumar Vishwas over a public recital (and subsequent video) of one of his father’s poems. It truly baffles the mind as to why one of Bollywood’s richest men would want to prevent the enjoyment and access to his father’s poetry, which is regarded as a pinnacle of hindi romantic poetry.

The reuse, remix and reworking of Harivansh Rai Bachchan’s works can be transformative and innovative; it can provide the inspiration for greater feats of creativity; and most importantly, it can allow the general public to access such great poetry, which, surely, must have been the intendment of Mr. Harivansh Rai Bachchan himself. In his own words –

The couplet means – ‘don’t live like a flower, which will crumble after blossoming. If you live, live like a stone – once carved, you become a god.’ It’s an apt metaphor for allowing his poems to be free from the shackles of copyright.