In an interesting turn of events, as pointed out by Sudipto Sircar on the India Law and Technology blog over here, Airtel & Google have partnered to offer a new service where Airtel’s mobile users can access the Google search engine, Gmail and Google+ services for free, up to 1 GB. According to Airtel’s statement to the ET, “…Free Zone powered by Google, will give Airtel mobile customers access to mobile web search and feature phone friendly versions of Gmail and Google+ in India. The first page of a website linked from search results is provided at no data cost”. You can read more about the service over here. 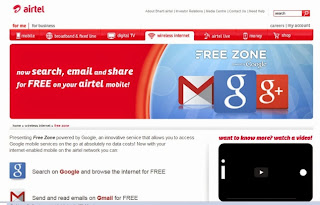 This announcement is rather surprising since, in the past, Google and Airtel have taken diametrically opposing views in the debate on network neutrality. Before we go any further, let me explain to our readers, the basics about the network neutrality debate and its importance to the future of copyright policies. For those of you really interested in the topic, I would strongly recommend this excellent paper by Stanford Professor Barbara Van Schewick, who is also the Director of the Centre of Internet and Society at Stanford Law School. She is a very vocal proponent of network neutrality and an Open Internet. I had the opportunity to take one of Prof. Schewick’s excellent courses on communication policy at Stanford and this post is based on what I picked up in her classes.
To put it briefly, network neutrality rules require Internet Service Providers (ISPs) to not discriminate against third party applications and service. In other words an ISP like Airtel or Vodafone should not discriminate between the services of Google or Skype online. Why would ISPs like Airtel or Vodafone have the incentive to discriminate against services provided by a Google or Skype? Well there are several reasons. For example if Airtel has a leading position in the Indian market for international calls, it has quite an incentive to interfere with services like Skype which compete with Airtel’s services for international calling. Similarly, Airtel which also provides satellite television services in most Indian cities will have an incentive to interfere in services like Youtube and other video sharing platforms which have the potential to compete with the satellite TV services provided by Airtel. Originally, ISPs did not have the means to discriminate between different online services but with the development of ‘Deep packet inspection’ tools, ISPs are in the position to discriminate between different services.

In countries like the U.S., the telecom regulator, the Federal Communications Commission (F.C.C.) has already announced rules for an ‘Open Internet’ and these rules require ISP to follow the principles of network neutrality – there are some exceptions for reasonable network management but outright discrimination is banned. You can read the rules over here on the FCC’s website. These rules are the subject of a challenge by Verizon, an ISP, on the grounds that the FCC does not have the jurisdiction under the Telecommunication Act, 1996 to make such rules.
Interestingly, it is companies like Google which have been the most vocal proponents of an Open Internet based on the principles of network neutrality. You can read Google’s submissions to the FCC’s proposal on network neutrality, over here. On page 4, Google clearly calls on the FCC to apply the network neutrality principles to both the wire line and wireless broadband infrastructure. According to news reports Google has made the same arguments in India. This is in sharp contrast to demands by ISPs like Airtel, which have reportedly asked India’s telecom regulator TRAI to allow ISPs to charge data interconnection services, which in other words, is a demand to charge companies like Google for the data that they transmit over Airtel’s networks. Medianama had an interesting report on this issue over hereand here.
Given that Airtel and Google are on the opposite sides of the fence, it is rather surprising to see Google abandon its long standing position on network neutrality to tie up with Airtel in violation of the basic principles of network neutrality. This partnership is especially disturbing in the Indian context because a large percentage of Indians are expected to use the internet over mobile networks rather than conventional fixed line broadband service. Moreover given that data charges over mobile networks are already quite high in India, free usage of even 1GB will give Google a substantial advantage over its competitors. How long before this extends to Google’s other services like You Tube? And why is Google singing different songs in India and the U.S.?
The most important question however is whether Google and Airtel are in violation of any Indian laws on the point – of course this begs the question of whether India even has a network neutrality regime? Apar Gupta, lawyer and the founder of the ILT blog, comments that TRAI has repeatedly asked for network neutrality despite not expressly enacting a law on the point. In the circumstances Google and Airtel would not be in violation of any law but that does not mean that TRAI should not step in now to put an end to the practice.
I’m still not sure as to why Google would take up such an approach in contradiction to its stated position worldwide. According to Apar’s post, other companies have inked such deals as far as three years ago – he links to this post on Medianama. But then again, I don’t think any of these companies have made as emphatic an appeal for an open internet, as is the case with Google.
I’m planning to write to Google to ask them for their version, although in my experience, in the rare event that they do reply, Google India’s legal and policy team does not provide any useful information or comment. So be it.

Update: Here is a link to a recent op-ed that I got published in the ET on this very same topic.