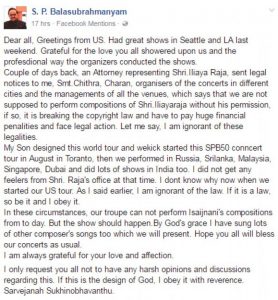 As has been reported by multiple news outlets there is a copyright dispute brewing between Ilayaraja and SP Balasubramanyam (SPB), both of whom are national treasures. While Ilayaraja is a music composer, SPB is a singer. Currently on an international tour giving performances around the world, SPB posted an update on his Facebook page informing his fans that he had received a legal notice from Ilayaraja demanding royalties for performing his compositions during the tour. In the same post, SPB expresses his ignorance over these legalities and expresses his willingness to comply with the law.

The legal issues raised by this dispute are rather simple. When a music composer creates a new composition the Copyright Act, 1957 automatically creates a copyright in the music without the requirement for any pre-formalities such as registration with the Copyright Office. Per Section 17 of the Copyright Act, the copyright will vest either in the music composer or alternatively, if the composer is an employee of a music label or production house, the ownership of the copyright will vest in the employer, depending on the terms of the contract. In this case, since Ilayaraja has reportedly issued the legal notice in his name, it is most likely that he has retained the copyright in his own name for the international territories in which SPB is performing. Once the ownership question is clear, it is necessary to move on to the rights vested in owner of the copyright. This question can be answered by looking at Section 14(a)(i) which gives the copyright owner a bundle of several rights, including the right to reproduce or perform the work or communicate it to the public. This means that anytime a person is performing the music composition in public or communicating it to the public via a live broadcast, they require the prior permission of the copyright owner.

In this case, there is little doubt the SPB should have secured the necessary copyright permissions from not only Ilayaraja but also from the persons owning the copyrights in the lyrics in the songs that he is singing. I’m really quite amazed that somebody with as much experience as SPB is not aware of these basic requirements under copyright law or rather it is amazing that the event managers did not know of these requirements because under American law (where SPB is currently performing) the event managers and the venue owners can also be made liable for copyright infringement.

As is normal in such cases, the media has got itself into knots trying to explain the copyright issues in this dispute. For instance, take this piece in the Outlook, which gets the entire legal dispute wrong when it concludes “Balasubrahmanyam has a right to sing his songs. That’s no copyright violation. Ilayaraja may want his share of the proceeds.” The article quotes Senior Advocate Pratibha Singh of the Delhi High Court as saying “But as a copyrights lawyer, let me tell you performers have their own copyrights as per law. The singer always is entitled to rightly perform. The only thing is, the composer may want his share of the royalty. That’s what the notice by Shri Illayaraja may be but understand the caveat that I haven’t seen the notice.” It is likely that she’s been misquoted or misinterpreted on this point because the statement published in the article is wrong in law.

Under the Copyright Act, performers have a performer’s right and not a copyright. Section 38 of the Act states:

“(1) Where any performer appears or engages in any performance, he shall have a special right to be known as the “performer’s right” in relation to such performance.”

The definition of performance in the Act is as follows: “performance”, in relation to performer’s right, means any visual or acoustic presentation made live by one or more performers”;