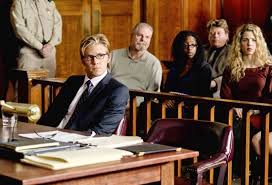 We are happy to bring to you another guest post by our Fellowship applicant Shubhi Sharma. Shubhi is a 4th year student at Rajiv Gandhi National University of Law, Punjab. This is her second submission for the Fellowship.

Who Can Be A Celebrity: A Christopher Porco Story

In 2013 Lifetime Entertainment Services (LES) decided to broadcast a film titled “Romeo Killer: The Christopher Porco Story”. LES later found itself engaged in a legal spat of civil rights action suit with the man on whose life story the film was based; Christopher Porco. Mr. Porco stashed the entertainment company with a demand to payment for using his name and editorial rights for the film’s content. Before moving onto the analysis part, let us take a short tour of this legal battle.

Mr. Porco was convicted of murder of his father and attempted murder of his mother while they slept in their home. This was a highly publicised trial and Mr. Porco was sent to serve 50 years in prison on 12th December 2006. Given the level of publicity attached to this case, LES picked up the facts and hence adapted it into a film. Mr. Porco, before the film’s broadcast, felt that his “publicity rights” were being infringed since his consent wasn’t sought before making a film on him.

Thus, on January 29, 2013, Mr. Porco, while serving his time, filed the suit under Civil Rights Law, sections 50 and 51, praying for a preliminary injunction to preclude the airing of the film. Mr. Porco’s consequent motion for a temporary restraining order to prevent the film’s broadcast, while awaiting decision on motion for a preliminary injunction, was granted by the New York Supreme Court.

LES later appealed the order. The Court granted an emergency relief by vacating the temporary restraining order, pending an appeal on the merits. Resultantly, the film was nationally televised on March 23, 2013. Later on, Court dismissed Mr. Porco’s motion for failure to state a cause of action. Mr. Porco appealed against the order and New York Appellate Court recently, 23rd February, 2017, gave an unusual ruling that LES might have to pay (the film’s release lapsed the editorial right over content) Mr. Porco for violating his publicity rights.

The Law of the Battle

Section 50 of the Civil Rights Law accords the act of violating publicity rights as misdemeanour. This section provides protection to a person’s name, voice, portrait and picture from unauthorised use for ‘advertisements’ or ‘trade’ purposes. Section 51 is a detailed section providing for, in the first part, an action for injunction and damages including exemplary damages. In the second part, it lays down exceptions to the law in section 50.

LES put forward two arguments; firstly, that the law, as aforesaid, applies to ‘advertising’ and ‘profit from trade’ purposes and would, thus, not apply expressly to a true-crime based film containing factual accounts of the crime. Secondly, that the law is not applicable to reports of newsworthy events or matters of public interest. The Court, accepting these arguments, held that Romeo Killer is not a newsworthy account of mere facts but is a fictional biography and that the film misappropriates Mr. Porco’s name without his consent for purposes of ‘profit’.

Inherent Defect in the Court’s Analysis

Non-fictional films are usually inspired by real-life events reported through media. If made into a film, these facts are kept intact, but to make the film such that it connects with the audience, it is sometimes dramatised with fictional characters or same characters with fiction personalities or made-up dialogues. However, this dramatisation becomes a part of a comprehensive narration and does not, technically, fictionalize the real facts of the event. Thus, the Court’s understanding that Romeo Killer film was too fictionalised to fall within the exception of newsworthiness is delusional. Further, the facts which are already in public domain can’t be denied use in films as copyright protects ‘expression’ of facts and not the facts per se. Since, Romeo Killer covers the trial of Mr. Porco, facts of which are a part of public domain, making a film on it should not attract section 50 and 51 in the first place.

Apart from the legal grounds, as mentioned above, there is another defect that is malignant to the entire institution of right to publicity.

For the purpose of this post, let us classify people into two categories; celebrity and ordinary. Being a ‘celebrity’ denotes the condition of being famous. Naturally, the celebrity status comes with some inherent persona that can be commercially exploited and therefore, they get a right to their own publicity. In other words, publicity rights or image rights allows a celebrity to ‘charge’ for use of their name, picture, portrait or voice. In terms of intellectual property, celebrities acquire goodwill through this status and the law of right to publicity prohibits the unauthorised usage of anything incidental to a celebrities’ image. In direct contrast, the right to privacy is an extension of an individual’s will to be left alone and prevent her unauthorised representation irrespective of the commercial value attached thereto.

Every individual has a right to his own privacy. This would include commercial exploitation of an individual’s representation as well. However, a right to publicity must be available only to celebrities. The problem here is twofold; firstly, there exists no legal definition as to who can be a celebrity and secondly that different jurisdictions have different standpoints as to whom the right of publicity can be conferred upon. For instance, in New York, the right extends to everyone whereas in Minnesota and South Carolina, it extends only to celebrities.

I contend that it should exist only to celebrities since it is only celebrities who enjoy certain positive fame in society and have image rights to their name. For everyone else, it would fall under their right to privacy. Next question as to who can be a celebrity? If we consider Mr. Porco or similar people in Indian jurisdiction like the ‘Talvars’, ‘Charles Sobhraj’, ‘Dawood Ibrahim’ et al., all of these have had a film made on them and they are all convicted of or related to commission of some crime. Can these people be equated with the celebrities like ‘Phogat sisters’ or ‘Mary Kom’ or ‘Sanjay Dutt’? Principally, the equation is not correct as has happened in Mr. Porco’s case. Convicted felons do enjoy fame for a certain period but they are not celebrities whose ‘image’ is a monetary asset to them.

India’s law on publicity rights saw its inception with ICC Development (International) Ltd. v. Arvee Enterprises[1], wherein the court by holding that right of publicity evolves from right to privacy brought down the entire stipulation concerning ‘celebrity status’ to ‘dignity’ of a person, which by logic would cover each and every individual and not just celebrities. Further the court also held that an “individual may acquire this right of publicity through an event, sport, movie etc”. By not elaborating upon this line of judgement, the court has given an open-ended definition. Thus, although India, till date, hasn’t had a case like Mr. Porco’s but if in future we have one [as a criminal trial can very well be an “event” of one’s life]; we can expect a similar judicial pronouncement.

Hence, even with effective judicial developments regarding this law, there still remains a lot to be explored by the Indian Judiciary.