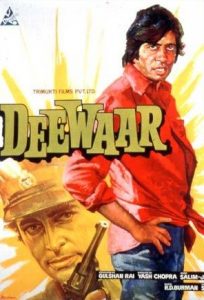 A few days after his birth anniversary (read: in an instance of freakish coincidence), one of Kishore Kumar’s famous performances, Keh Doon Tumhe (well known as a hit RD Burman – Kishore Da collaboration) wound up at the Bombay High Court, in the form of subject matter of a copyright dispute.

The song was part of a very popular movie from the 70’s – Deewaar. It so happened that the makers of the movie, Trimurti Films, woke up one morning to the news that the song had been remixed without their authorization and was being used in the recent release, Baadshaho. Trimurti thus took its displeasure and copyright infringement claims to court, demanding an injunction. By 22nd August, it secured an ad-interim injunction against the makers of Baadshaho. The court ordered the release of the film without the remixed song. Reacting quickly, the makers of Baadshaho (defendants) appealed this ad-interim injunction order. On the 28th of August, the appellate bench confirmed the impugned injunction order passed by the single judge through a comprehensive, 74 page order. Notably, this order, with the consent of both parties at the outset, also terminated the notice of motion initiated for interim relief.

The facts take us way back to the 1970s – when producers of Deewaar (Trimurti i.e. plaintiffs) contracted with famous music composer, RD Burman and lyricist, Sahir Ludhianvi to compose and write the song, Keh Doon Tumhe, among others. Both these contracts were produced before the court in order to evidence that they were contracts of employment, vesting ownership of copyrights in the song with the producers of Deewaar i.e. the plaintiffs.

On 2nd January, 1974, the plaintiffs executed a contract with Polydor India Limited (PIL) granting them, rights to make and sell gramophone records for the songs from the movie – including Keh Doon Tumhe. Therefore, all rights in the sound recording – including mechanical reproduction rights were assigned to PIL. A relevant extract from clause 8 of the contract states, “The Company shall also be entitled to the sole right of production, reproduction, sale, use and performance (including broadcasting) throughout the world by any and every means whatsoever of the records of the works performed by the artists and musicians etc., under this Agreement.”

Do rights in the sound recording subsume rights in underlying works?

This contract granting recording rights to PIL, became the defendants’ primary selling point. They submitted that the rights assigned to PIL via this contract, had in fact, eventually been assigned to them. This had been done via another contract executed between the defendants and Universal Music – the group that succeeded PIL in title.

The court rejected this interpretation of copyright law. Undertaking a patient perusal of the copyright act – particularly sections 13 and 14 – the court observed that prima facie, it would be an incorrect interpretation of the law to argue that rights in the sound recording subsume rights in the underlying literary, and/or musical works. The copyright act distinctly recognizes the separate classes of works, and copyright must be said to independently subsist in each of these works. Under section 14, each of the classes of works recognized under the previously stipulated section 13, are assigned several exclusive rights. For original literary, musical, artistic works this includes the right to inter alia reproduce, perform, publish, adapt, translate, and make a cinematographic film/sound recording of the work. Similarly, for cinematographic films and sound recordings, the exclusive rights granted under law are of a more limited range, including inter alia communication to public and physical reproduction of the work.

Keeping these provisions in perspective, the court held that accepting the defendants’ argument would permit the incorrect interpretation that once the exclusive right of making a film/recording is exercised, all other rights granted for the work under law, are automatically extinguished. Further, section 13(4) expressly prevents the copyright in a cinematographic film/sound recording from affecting the separate copyright in underlying works. Thus, it is clear that the law intended for separate, distinctive copyrights to subsist in each class of work, and nothing to the contrary can be argued.

Only rights as understood by the assignee, to be further assignable

Another important observation by the court was that – in 2008, by a letter addressed to the plaintiffs, Universal had clarified that the music from Deewaar could still be used by the plaintiffs, in any manner they wished. The court opined that according to this letter, the rights conveyed to PIL by the 1974 agreement were understood by Universal (PIL) to be of the limited nature as submitted by the plaintiff. Therefore, if Universal itself had understood and accepted the rights assigned to them to have been of a limited extent, they could not have further assigned broader rights to the defendants.

The injunction order passed by the single judge was thus confirmed. The order was held to suffer no illegality or perversity warranting an interference by the appellate bench. It was also observed to be entirely justifiable on both factual and legal grounds.

This order (and also the impugned ad-interim injunction order) throws up some important points for discussion with regard to copyright law as applicable to sound recordings:

Sound recording vis-à-vis underlying works: For one, the order is a refresher on copyright law as applicable to sound recordings. We know that sound recordings and cinematographic films are, under law, a sum of all the underlying works i.e. literary, musical, dramatic works. However, they still exist as distinct entities independent of these underlying works. Each of the works are very much recognized independently by the copyright act. The scheme of sections 13 and 14 have to be interpreted to give effect to this distinction between the classes, especially so that rights in one class do not consume rights in another.

Remix under law & judicial treatment: Finally, I’d like to highlight the reason this case actually went to court – that an unauthorized remix was created of the original song. The Bombay HC has restricted itself to the prima facie considerations outlined above, in order to adjudicate in a limited fashion, upon the use of a remix version in a film. At present, this does not address or change the ambiguity that still exists under law with regard to “remix” versions of songs. As highlighted by us here, although the 2012 amendment expressly stipulates provisions applicable to “cover” versions – it does not extend the same courtesy to “remixes.”

Prior to the amendment, both “remixes” and “covers” were considered as “version recordings” by the courts. If I understand the plethora of case law (see Gramophone I (1995), Gramophone II (1999), Gramophone III (2000), Gramophone VI (2010), Mars Recording v. Saregama (2015), etc)  on the matter correctly, version recordings were/are considered as a variant of sound recordings – being recordings of the same song but with a different set of performers and arrangers. This essentially made them neither a copy nor a reproduction of the original recording. All the person making such version recordings had to do, was to satisfy the fair use mandate, stipulated under the erstwhile section 52(1)(j). According to the courts, the section permitted the making of version recordings, as long as royalty was paid to the owner, and prior consent was obtained from the original owner of copyright in the sound recording before making any alterations to it. This section led to a lot of confusion – with the courts providing varying interpretations of the application and scope of the section, to a growing entertainment sector.

In 2012, via its notable amendments, the copyright act scrapped section 52(1)(j) and provided for specific statutory licenses for “cover” versions of songs. For all intents and purposes, the provision for cover versions seem to be a statutory recognition of such “version” recordings that are common within the entertainment industry today. At this point, it is unclear if the law recognizes remixes – as cover versions under section 31C of the Act. Or perhaps the question is: should the law recognize remixes as “cover” versions under the Act?

This would lead us to a judgment call on several consequential issues – what a remix really is, if a “remix” is different from a “cover” in essence and practice, whether we should consider a “remix” an “adaptation” or a “reproduction”, and if this adaptation or reproduction is essentially of the original recording or of the underlying works.

I plan to attempt a more detailed thematic post on this subject, exploring some of the issues outlined above. Until then, I offer our readers links to both the original song at the heart of the Deewaar-Baadshaho controversy, and its infamous remixed version (which, strangely, is still available on Youtube despite the injunction). Be your own judge. And yes, forgive yourself if you groove a little too much to the tunes of the latter.