Anand and Anand report that a dispute involving claims of the infringement of copyright and passing off of Roysten Abel’s awe-inspiring stage production of Manganiyar folk musicians from Rajasthan, the Manganiyar Seduction, has recently been settled without a ruling on the merits of the dispute.

The distinctive and extraordinary production by Abel combines the dramatic flair of a theatre production with the enchantment of a live folk music concert, which relies upon the harmonisation of the 43 musicians seated inside a massive stage structure, with separate cubicles for each musician, surrounded by large light bulbs. The creativity of the project reflects in its musical arrangements, as well as the stage directions and control over the movement, set up and lighting of the stage, which have been inspired by the Hawa Mahal in Jaipur and the red light district of Amsterdam. You can watch a short preview of the production here.

The allegations of infringement were made against another show which attempted to copy not only various elements of the production, including the lighting and stage directions, but also chose to mimic the name of the original production, the Manganiyar Seduction. A photo of the original (left) and the purportedly infringing work (right) is below: 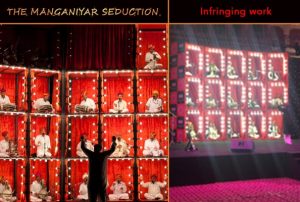 While the suit for infringement itself was settled (it appears that the defendants agreed to acknowledge the original work as well as pay an amount of Rs. 1.5 lakhs in damages), the case raises an interesting issue of intellectual property protection in stage directions.

(Curtain Rises, Lights) The claim of infringement seems to be founded not on the copying of the music of the production, but upon ‘the manner in which the musicians are seated on stage in cubicles and the lighting of the show.’ A dramatic work comprises not only of the underlying literary work, but also the manner in which the underlying work is interpreted by a director, including the movements of the actors, the lighting, the setting of the stage, etc. It appears that, in the present case, it is these stage directions which are being claimed as distinct protectable elements of the Manganiyar Seduction. I have not found many examples of such a right in stage directions being claimed even in other jurisdictions with more developed IP jurisprudence, and it is worth examining whether such a right could be claimed under Indian law.

Act One: At the first stage of the infringement analysis in this case, we must assess whether the work is ‘original’ and whether it falls under Section 13(1)(a) of the Copyright Act, 1957, which states that copyright subsists in ‘original literary, dramatic, musical and artistic works’.

The definition of musical work expressly excludes ‘any words or any action intended to be sung, spoken or performed with the music’, therefore, stage directions are clearly outside the scope of this. Further, literary works only refers to works in writing. Therefore, our examination of the merits of any claim for infringement would be founded on the impugned work being a ‘dramatic work’. Section 2(h) of the Copyright Act states that a dramatic work “includes any piece for recitation, choreographic work or entertainment in dumb show, the scenic arrangement or acting form of which is fixed in writing or otherwise but does not include a cinematograph film;” The definition is not exhaustive, and the range of dramatic works could go beyond the examples under Section 2(h). However, as noted previously on this blog, the definition of what a ‘dramatic work’ encompasses is far from clear. At the very least, however, it is apparent that fixation in a tangible medium (such as writing or celluloid) would be a necessary element for a claim of infringement under this section. However, as far as stage directions go, the Delhi High Court has observed, in the case of IPRS v Aditya Pandey, that “…added stage directions may affect the performance of the play on the stage or on the screen and have an impact on the performance seen by the audience. Stage directions are as much part of a dramatic work as plot, character and dialogue.” It would therefore seem that such stage directions as are provided in the Manganiyar Seduction, should come under ‘dramatic work’ under the Act.

Act Two: To assess the originality of the dramatic work, which is a necessary facet of any copyright in such work, the Indian Supreme Court, in Eastern Book Company v DB Modak, has adopted a standard for originality according to which an original work should be ‘the product of an exercise of skill and judgment and it is a workable yet fair standard’ and must also incorporate some ‘minimal degree of creativity’. Considering the Manganiyar Seduction, the arrangement of the singers, their movements and the lighting certainly endow its stage directions with sufficient originality to fulfill the standard under Section 13.

Act Three: Assuming that copyright subsists in the stage directions of the production, the next stage in the infringement analysis is whether any of the exclusive rights granted to a copyright owner have been infringed in this case. Section 14 of the Copyright Act provides the specific circumstances under which a copyright in a dramatic work are deemed infringed, and includes the public performance of such a work, or an adaptation of the same, (without authorisation) to be infringing. In the present case, the stage directions by Abel were being publicly performed without authorisation. Therefore, the later production would be deemed to be infringing exclusive rights of the director.

From the cursory infringement analysis above, it seems likely that a claim could be maintained against the copycat production in the present case, given the overall similarity in the look and feel of both the productions and the high degree of originality and creativity in the Manganiyar Seduction, which was apparently blatantly plagiarised by the other production. While we will have to wait another day for a clear ruling on the scope of the protection of ‘dramatic works’, it is interesting to see novel claims being made for protecting creative rights in such productions.