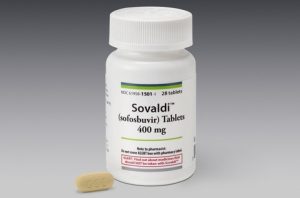 The World Health Organization records that as of October, 2017, 71 million people were affected by the Hepatitis C Virus (HCV), a debilitating virus which attacks the liver. Around 12 million people are affected by HCV in India – about one in every hundred. Just a few years ago, in 2014, the global incidence of HCV reported by the WHO was between 130-140 million.

The remarkable decline in the HCV-affected population can probably be attributed to the blockbuster drug, Sofosbuvir. Patented by Gilead (brand name: Sovaldi), the drug was introduced in 2014, and marked a major breakthrough in HCV treatment, with an estimated 95% cure rate, and remarkably reduced side-effects as compared to previous treatments. However, Sovaldi has been the subject of intense controversy both on the scope of related patent claims and for the pricing mechanisms employed by Gilead in its marketing of the drug. Sovaldi is often name-checked in debates involving public health, access to medicine. We have extensively covered developments on Sovaldi, globally and in India, in our blog, here.

In September this year, Malaysia became the first country to grant a Government Use license for manufacturing Sovaldi. A Government Use License is a form of Compulsory License available under Section 84 of the Malaysian Patents Act, which makes a patented invention available for exploitation by the government. Section 84 states –

“Nothwithstanding anything contained in this Act –

(a) where there is national emergency or where the public interest, in particular, national security, nutrition, health or the development of other vital sectors of the national economy as determined by the Government, so requires; or

(b) where a judicial or relevant authority has determined that the manner of exploitation by the owner of the patent or his licensee is anti-competitive,

the Minister may decide that, even without the agreement of the owner of the patent, a Government agency or third person designated by the Minister may exploit a patented invention.”

The section also states that the government must give notice to the patentee and pay an ‘adequate remuneration’ for the use of the patent. Malaysia’s use of the government use provision comes in the aftermath of price negotiations with Gilead, which resulted in Gilead agreeing to include the country in its voluntary license, likely as a measure to avoid the government intervening through a compulsory license or a government use license. It is expected to reduce the prices of Sofosbuvir to between US$ 100-300, a significant relief for the approximately 500,000 people with HCV.

In India, under Section 100 of the Indian Patents Act, the Government has the power to use, or authorize a third party to use, any patented invention after payment of adequate remuneration to the patent holder. The power to issue a Government Use License under the Indian Patents Act, is, in fact, much broader than the Malaysian law, and does not require the government to fulfill the threshold criteria under clauses (a) and (b) above. However, the same has never been used to license drugs in India, even despite the flexibility available for such a course under the TRIPS treaty.

Gilead’s drug prices vary widely owing to complex pricing strategies and differences in IPR regimes. In the USA, where the drug was first marketed, Sovaldi can cost up to US$ 84,000 for the 12-week course. In Malaysia, the drug used to be priced even higher, at around US$ 87,000 for the full course. In China, with the highest population of HCV, where regulatory approval was recently granted, the drug is being marketed for 1/5th of this price, and in India, it has been marketed at a 99% discount from the US price, at around US$ 539. Sovaldi’s prices around the world are a result of a combination of factors – Gilead’s own access programmes, voluntary licenses entered into with generic manufacturers, and, not least, intellectual property regimes in different countries and their approaches to access to medicine.

Egypt has rejected the primary patent for Sofosbuvir, other jurisdictions like the EU, China and Ukraine have invalidated certain claims related to Sovaldi, which have been seen as evergreening tactics for the drug. In India, the patent has been approved after a long and fraught battle between Gilead and activists at the Indian Patent Office. A challenge to the IPO’s decision is currently pending before the Delhi High Court. During the course of the patent application, Gilead made the decision to voluntarily issue licenses to 11 Indian generic manufacturers, for domestic sale as well as for export to 101 low and mid level countries. As per the terms of the license, Gilead receives 7% royalty on the sale of the drug. Likely as an outcome of generic competition, the price of generic Sofosbuvir has come down to around Rs. 35,000. However, given the lack of data on HCV in India, it is difficult to say whether the drug remains affordable at this price.

At the same time, there has been some criticism regarding Gilead’s tactics. In India, the issuance of the voluntary licenses, prior to the patent being granted, has been criticised as a tactic to gain market control while the validity of the patent was unclear, and restrict access to certain middle income countries (including Malaysia, Russia and China) which have been placed in a higher bracket in Gilead’s tiered-pricing framework, even though HCV incidence in these countries is high (MSF states that approximately 73% of the burden of HCV is in middle-income countries). These exclusions become especially significant given that Indian generic companies supply close to 80% of the world’s antiretrovirals. The licenses also include restrictions on exporting sofosbuvir’s Active Pharmaceutical Ingredient, curtailing access to the raw ingredients for generic manufacturers across the world. Further, the licenses allegedly require the generic producers to impose restrictions on the drug’s use by patients – such as how and who may purchase the drug.

Malaysia’s use of the government use license, despite the offer to include it in its voluntary licenses, is an eye-opener for jurisdictions attempting to battle the HCV epidemic in their countries, and could set an important precedent in utilizing TRIPS-compliant flexibility under their domestic patent laws to increase public access to health on their own terms. At the same time, it could further incentivize manufacturers like Gilead to renegotiate the terms of production and marketing in other economies.