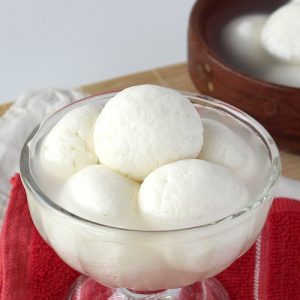 We are pleased to bring to you a guest post by Ms. Latha Nair. Latha is a partner with the IP boutique K&S Partners, a pioneering firm in the area of GI practice. In this brilliant post, she analyses the propriety of registering every regional food stuff as a geographical indication (GI). Here’s a ‘taste’ of her post: “Over the decades, every traditional regional recipe has travelled the length and breadth of the country, providing gustatory comfort to its natives settled in various parts of India. While misplaced enthusiasm and jingoistic sentiments have resulted in the filing of applications to register some such regional recipes as GIs, it is time for the authorities to rein in such a trend, lest India will dilute its GI protection process. ”

Latha has written a number of guest posts for us in the past as well, which can be viewed here, here, here and here.

The recent controversy between the States of West Bengal and Odisha over the intellectual property (IP) rights over a sweetmeat raises several questions on the propriety of registering every regional food stuff as a geographical indication (GI).

Many a sweet and savoury dish is born into India’s rich culinary diversity. While the Geographical Indications of Goods (Registration & Protection) Act, 1999 (‘the GI Act’) provides for registration of ‘food stuffs’ as GIs, the pitfalls of registering food stuffs as GIs are worth examining. Primarily, by adding a mere geographic prefix to a food stuff, it cannot be transformed into a product worthy of a GI tag.  A hypothetical example would be Banglar Sandesh. Likewise, the presence of a geographic prefix will not always make a food stuff a GI. To illustrate, Mysore Pak, a quintessential south Indian sweetmeat, is made everywhere in southern India and not just in Mysore. Both these food stuffs are mere recipes and the geographical prefixes thereto do not endorse a regional origin or any other qualities or characteristics or reputation that can be associated with the respective geographies.

What then is the thin line of distinction between a recipe and a GI tag? While a recipe can be executed anywhere, a food stuff that deserves a GI tag must historically originate in a specific geographic region alone and must possess certain qualities or characteristics or a reputation that is essentially attributable to the said region. In other words, the consumer should be able to associate it with the relevant geography and tell it apart from similar genre of food stuffs. In a country as diverse as India, due to inter-state migrations, traditional recipes have remained rooted to their respective regions only for reasons of short shelf life or limitations in following traditional practices used therefor outside the geography. Unlike GIs for agricultural products that are rooted to the geography, most recipes for regional food stuffs tend to cross the borders with those who consume these. Over the decades, every traditional regional recipe has travelled the length and breadth of the country, providing gustatory comfort to its natives settled in various parts of India. While misplaced enthusiasm and jingoistic sentiments have resulted in the filing of applications to register some such regional recipes as GIs, it is time for the authorities to rein in such a trend, lest India will dilute its GI protection process.

In that backdrop, it is interesting to examine how Europe, having a similarly diverse culinary culture, has dealt with such issues. Regulation (EU) No. 1151/2012, dealing with quality schemes for agricultural products and foodstuff, protects both GIs and what are called “traditional specialities guaranteed” (TSG).  Most notably, the Regulation recognizes that the added value of a GI or a TSG is based on consumer trust and that it is only credible if accompanied by effective verification and controls. If a name describes a foodstuff that results from a mode of production, processing or composition corresponding to traditional practices followed therefor or is produced using traditional raw materials or ingredients, it is eligible to be registered as a TSG. Further, such name must be traditionally used to refer to the specific product or must identify the traditional character or specific character thereof. A TSG must also comply with a specification comprising the name of the product, a description thereof including its main physical, chemical, microbiological or organoleptic characteristics, demonstrating its specific character, a description of the production method that the producers must follow, including the raw materials or ingredients used therein and the key elements establishing the product’s traditional character.

The Regulation is based on the premise that registration of TSG helps the producers of traditional products to communicate to consumers the value adding attributes of their product.  Anyone should be able to use a registered TSG, provided that the product concerned complies with the relevant specification and the producer is covered by a system of controls. Having said that, the Regulation also registers food stuffs as GIs, when they are not mere recipes.

The current provisions of the GI Act that permit registration of food stuffs must be amended to limit such registrations to those food stuffs that (i) are historically produced in a specific region alone, (ii) are not the same when produced outside the region and (iii) are not generic recipes for food stuffs. Further, the Act must be amended to mandate the proprietors of GIs to file an annual quality control statement with supporting documents. This would not only streamline the supply chain integrity of the concerned goods but would also foster consumer trust and credibility. Regarding food stuffs that are mere traditional recipes, a separate law à la the European Regulation may be considered.

Considering the cross-cultural migrations in India and the current quality control vacuum in the law, if the GI Act is not suitably amended, GI registrations would soon be viewed as not creditworthy. Taking steps in this direction could also assist India to project and exemplify GIs as a perfect IP right to aid its “Make in India” program.