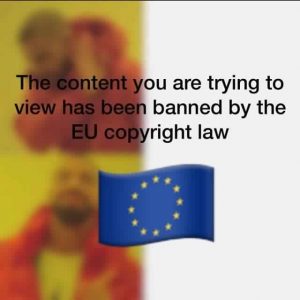 The Internet as you know and love may change. The vote’s out!

On 20th June, 2018, the European Parliament’s legal affairs committee (JURI) voted to approve amendments to Articles 11 and 13 of the EU Copyright Directive in the Digital Single Market. These Articles have drawn the ire of many since they require internet platforms to monitor copyrighted material uploaded on their platforms and to pay fees to news companies before linking their content. In this post, I’ll be solely focusing on how Article 13 poses various problems to the Internet community and I’ll also be contrasting the draft legislation to the current legal position in India.

Article 13 (the latest version of the Article can be viewed in the JURI draft compromise amendment here) imposes an obligation on online content sharing service providers (OCSSPs) to conclude “fair and appropriate licensing arrangements, unless the rightholder does not wish to grant a license or licenses are not available”. OCSSPs stand defined in Article 2(4a) as “an information society service” which stores and gives access to public to copyrighted works uploaded by users. A combined reading of its accompanying recitals, Recitals 37 to 39, leads to the conclusion that irrespective of whether OCSSPs enter into licensing arrangements with copyright owners or not, they are bound to employ “adequate and proportionate measures” to ensure “non-availability of copyright or related right-infringing works”.

In other words, this Article imposes liability on internet platforms, which mostly rely on user-uploaded content, to adopt certain automated technologies which will act as “upload filters” i.e., recognize and filter work created by someone other than the copyright holder. The platform would then be required to either automatically reject such content or pay revenue for such identified content. Previously, the Article used the term “content recognition technologies”, which was then replaced by “adequate and proportionate measures” since there was a lot of criticism and uncertainty about the effectiveness of these technologies. It has to be noted that though the Article does not directly refer to these technologies in its present form, the implementation of the Article would still necessitate the employment of such technologies since their obligation to filter uploaded content and pay revenue to content owners remains unchanged.

This Article had been designed to tackle the “value gap” in the musical industry i.e., the unauthorized presence of copyrighted works on internet platforms and the mismatch between revenue earned by Internet platforms from the use of copyrighted content and the revenue earned by owners of such content. It has been argued that such measures would force internet giants such as Google, Facebook etc. to pay their share of revenue to content owners in all industries. The vote has been welcomed by the music industry, who claim that internet platforms were misusing their safe harbor protection to force content owners into entering licensing arrangements where they receive less royalty.

The fact remains that these upload filter mechanisms will ultimately function as “censorship machines”, as Julia Reda, a German Pirate Party MEP and a long-time opponent of the EU Directive, puts it. Some have likened this Article to Youtube’s Content ID filtering technology (while others have stated it differs), an automated system in which YouTube helps copyright owners to identify and manage their content in a referenced database by filtering and blocking uploads which matched database entries. The Content ID technology has had its fair share of controversies. Algorithms which sustain these kinds of content-recognition technologies will not be able to tell apart legal uses such as parody, memes, remixes etc. and hence all sorts of legal content may be taken down, which will lead to selective availability of content to users and an impediment to free flow of information. Such fears are not unfounded, as can be demonstrated by YouTube’s decision to take down several legal channels ahead of the June 20th vote for alleged copyright violations. Article 13 has been termed as a tool for “automated surveillance and control” which would aim to target big corporations, but would end up affecting startups and small companies who cannot possibly afford costly filtering technologies. Also, by targeting all sorts of copyrighted content such as text, photos etc., websites such as Wikipedia may also get affected. Though the drafters attempted to keep such websites out of the ambit of Article 13 by exempting “online encyclopedias” from its application, the exemption is limited to completely non-commercial activity. Since Wikipedia is a donation-based community project, Reda explains that its activities might just be considered as “commercial” since a call for donations can be considered as commercial activity. Lastly, it has to be noted that Article 13 provides a deeply unbalanced liability structure; it only provides for imposition of penalties on platforms for copyright infringement and does not introduce a mechanism to punish false copyright claims or copyfrauds, as they are commonly referred to as.

Prior to the 2015 ruling of the Supreme Court in Shreya Singhal v. Union of India (“Shreya Singhal”), under Section 79(3)(b) of the Information Technology Act, 2000 and the Intermediary Rules, an intermediary was required to either remove or block access to content on receiving notice of illegality of such content by monitoring content, communication to intermediary by an affected entity or by a notification from the government. This enabled the filing of numerous frivolous complaints and multiple aggressive takedowns by intermediaries. In the Shreya Singhal ruling, the Court read down the provisions to hold that such takedowns can only be preceded by a court order or a notification from the government. It placed reliance on similar takedown systems followed in other countries such as Argentina. In doing so, the Court struck a balance between prevention of online censorship and protection of IP rights of content users. Unlike the European Parliament, the Indian Supreme Court makes a definite attempt to protect free speech rights of its netizens by providing a fair and balanced takedown mechanism.

Coming back to the issue at hand: There is a pressing need to curb such “reforms” since they make netizens question whether copyright laws can survive in the digital era. In providing an unworkable framework for protection of content owners’ rights and reduction of the value gap, the EU Parliament cannot hope for any changes in the status quo. Hope still remains for EU citizens, though. The Directive will only become a final legislation if it is approved by a plenary vote passed by the EU Parliament. Hopefully, the decision to approve Article 13, along with other equally controversial Articles of the Directive, will be reversed by that vote.