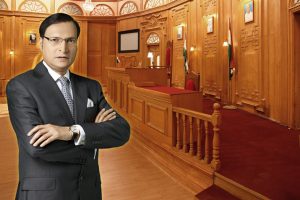 In an order passed a few days ago, the Delhi High Court issued an injunction against Zee Media from using Rajat Sharma’s name in all its print and electronic advertisements. It further directed the defendants to remove all hoardings across the country which mention Mr. Sharma’s name.

Here’s a brief background of the case at hand. For promoting its new channel, Zee Hindustan, the defendants had published the following advertisement on January 9, 2019 in the front page of the HIndustan Times: 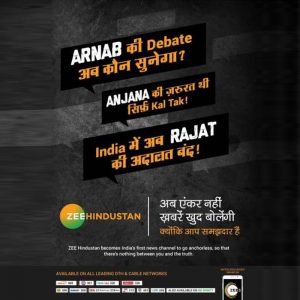 In the guise of introducing the “anchor-less” news channel Zee Hindustan, the advertisement clearly takes digs at famous TV journalists Arnab Goswami, Anjana Om Kashyap and Rajat Sharma. By implication, it states that viewers will no longer watch Mr.Goswami’s (in)famous debates or browse through Mrs. Kashyap’s news channel Aaj Tak (renamed condescendingly as “Kal Tak”).  In particular, it makes a reference to Rajat Sharma, the Chairman and Editor-in-Chief of IndiaTV and insinuates that people will no longer watch his popular, long-running show, “Aap Ki Adalat“. (interestingly, Mr. Sharma’s show had previously featured on Zee TV and Star Plus before being featured on India TV! Bad blood, anyone?)

These advertisements spurred Mr. Sharma to file a suit for permanent injunction against Zee Media. The Court relied on the famous Titan Industries and the Shivaji Rao Gaikwad (covered on the blog here) cases to reiterate well-known principles of personality rights aka right of publicity of celebrities. It came to the conclusion that the above advertisement was prima facie illegal and that the balance of convenience was in the favour of plaintiff.

Simply put, personality rights are identity rights of famous individuals i.e., people whose identities have acquired a sort of brand value. These rights, originating from privacy rights of individuals, allow them to control when, where and how their identities are used.

Though the Court relied on the Titan Industries case, it is surprising that they did not apply the famous test for determining liability for infringement of right of the publicity laid out in this case, which is as follows (and which was later cited in the Shivaji Rao Gaikwad case too):

Identifiability: The Celebrity must be identifiable from defendant‟s unauthorized use Infringement of right of publicity requires no proof of falsity, confusion, or deception, especially when the celebrity is identifiable. The right of publicity extends beyond the traditional limits of false advertising laws.“

On applying each of the criteria, we see that the plaintiff, Mr. Sharma, indeed had an enforceable right in his public persona/identity as a famous TV show host. Further, Mr Sharma could be clearly identified in the advertisement since there was a clear reference to his well-known TV show. The fact that the advertisement was disparaging in nature does not make a difference here since personality rights account for all sorts of unauthorised usages of indicia of identities of famous individuals.

All in all, it can be concluded that the decision of the Court is correct in principle. A bit more analysis about this evolving field of IP would have been appreciated, though.