In the next two posts in the ongoing blog post series on The Sustainable Seed Innovations Project, Natalie Kopytko, Post-Doctoral Research Associate, University of Leeds brings us two farmer stories. These stories provide clear examples of the achievements of innovative farmers and the challenges they face. This first story demonstrates how traditional knowledge can be applied in new innovative ways. At the same time, the story demonstrates that farmers are unable to financially benefit despite Geographical Indications. 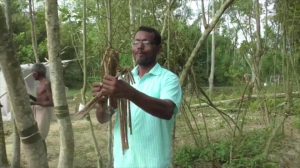 Jitul Saikia’s story demonstrates a farmer fulfilling the role of scientist, conservationist and entrepreneur.  As a sericulturalist, he rears Muga silkworms to produce the rare golden silk. 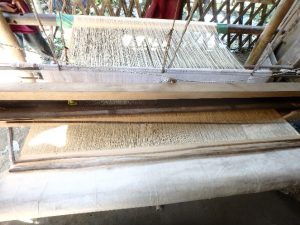 Included in the riches of India’s agrobiodiversity is the golden silk producing Muga silkworm (Antheraea assamensis) and the host plants on which they depend. These silkworms feed on the leaves of the aromatic Som (Machiulus bombycine) and Soalu (Litsea polyantha) plants creating a golden, glossy silk with extreme durability. This combination of beauty and strength has made for a silk historically reserved for royalty.

Today, air pollution from pesticide drift and the burning of crop residue threaten the health of the silkworm and the continuation of this traditional sericulture. Moreover, Muga has very specific ecological needs, low adaptability, and a narrow geographical distribution. Thus, the delicate silkworm is confined to the Brahmaputra valley in Assam and a few pockets within other north-eastern states. 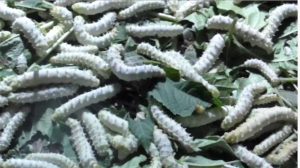 The restricted range of Muga is due in part to a dependency on specific host plants. In 2015, Jitul Saikia received Genome Saviour Farmer recognition for conserving 12 landraces of Muga host plant. Jitul highlights the differences of some of the varieties on this tour of his farm along with the potential medicinal properties of the varieties. Moreover, Jitul uses host plant diversity to innovatively improve silk production by moving the silkworm to different host plants at different stages of the life cycle.

To see the rearing of these silkworms throughout their entire life cycle watch this tour guided by Jitul. Key to Jitul’s techniques is recognising that host plant varieties differ in chemical composition and morphological structure and these differences matter in sericulture. For example, some host plant varieties improve silk production, others improve egg production (fecundity), some host plants are ideal for high-quality egg production (Muga seed), while the broad leaves of some of the plants provide shelter from the weather particularly during the rainy season as explained by Jitul in this video.

In the video, Jitul insists that host plant diversity must be used in rearing Muga silkworms. Farmers tend to prefer a few varieties of host plant for rearing Muga, but farmers do not match the host plants to the different life-cycle stages of the silk worm. By contrast, Jitul uses host plant diversity to increase production by using different host plants at different stages of the lifecycle. As he explained, he lets the silkworms feed on Soalu for the first three larval stages and then moves them to Som for the later stages. As a result, the size of the larva increases as does silk production. The farmers see that he has improved Muga seed production with 250 eggs or more per lane compared to typical production of 110 to 115 eggs. He also keeps careful records of his experiments hoping to influence the practices of other farmers. However, other farmers have not yet followed him in adopting this innovative technique.  Finally, he experiments with other species of silkworm as shown here. Again, he believes diversifying production will improve livelihoods. 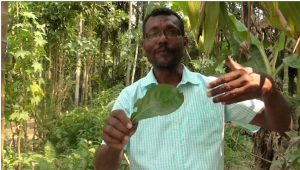 Once Jitul was successfully conserving and utilising Muga host plants, he then became interested in conserving Mango varieties. Currently he has 52 cultivars of Mango on his farm. Moreover, he has dedicated a 2 ha section of his farmland to preserving agro-biodiversity. He collects plants from tribal and wild areas and brings them back to this bit of land for conservation. Currently in this collection, he has 16 varieties of Som and 18 varieties of Ahu rice along with many other plant species.

Clearly his innovations and conservation work have moved beyond the efforts recognised in 2015.  As a farmer, Jitul is also a scientist using his fields as a laboratory to improve production. Moreover, he is formally recognised as a scientist with a masters in Entomology and collaborations with researchers in Guwahati and North Lakhimpur. He has not only committed his own land to research and conservation, but also his own money spending approximately 5 lakh (500,000 rupees) per year on funding the work.

In Assam it was traditionally said, “If luck favours you, no other crop in the world is more profitable”. Jitul has not relied on luck, but instead has used his own human capital in the form of scientific knowledge and intellectual curiosity to try to make Muga production profitable. He aims to train other farmers in his techniques to improve their livelihoods.

But for now, he adds that he and the other Muga farmers have yet to be lucky.