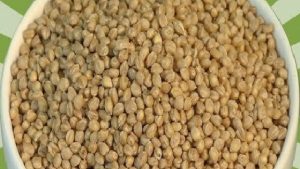 In the next post in the ongoing series on The Sustainable Seed Innovations Project, Natalie Kopytko, Post-Doctoral Research Associate at University of Leeds shares the story of a variety of wheat recently named Sona Moti. In way of context, the post briefly describes the current revival of ancient grains globally, specifically Emmer wheat varieties. The story of Sona Moti demonstrates the issues of traceability in variety development and the importance of intellectually property-broad.

The Story of Sona Moti

The story of Sona Moti demonstrates the important connections between intellectual property in a broad sense and generating financial capital/economic sustainability. Intellectual property distinguishes a product from other available products, so that consumers can make informed decisions. In naming this relatively unknown variety, Sona Moti, Sri Sri Ravi Shankar has differentiated the ancient grain from others available on the market. The name Sona Moti translates to golden pearl to describe the unique round shape and golden colour of the emmer wheat variety. Due to nutritional qualities of the grain determined by tests, the Art of Living are working with farmers in Punjab to establish markets and a better price for the product. The story of Sona Moti is also part of a wider comeback of ancient grains, particularly a growing recognition of the importance of emmer wheat varieties.

Emmer Wheat: An Ancient Grain Coming to a Plate Near You

Ten thousand years ago emmer wheat was amongst the first cereals domesticated. Emmer along with Einkorn and Spelt make up the hulled wheats distinguished from the free-threshing wheats by the persistent encasement. The extra protection from this hull is also the reason why these wheats are typically grown in mountainous areas with poor soil conditions [1].

According to Herodotus (495–425 BC) the people of Egypt considered emmer “the only fit cereal for bread”. Indeed, historical record shows that emmer was the sole wheat cultivated in ancient Egypt until Graeco-Roman times when outside political decisions dictated cultivation practices rather than local tastes. Neighbouring countries grew mainly free-threshing wheat, and yet Egyptians did not change practices, indicating a clear dietary preference [1].

In Italy, landrace conservation happened out of necessity, since emmer wheat provides a reliable harvest even in steep mountain fields where modern wheats fail [2]. The traditional Italian cultivation techniques of emmer wheat meet organic standards and emmer contains high levels of fibre; customer recognition of these healthy properties has created a comeback for emmer wheat. For instance, the market for hulled wheats increased by about 15% per year and farmgate prices increased some 30% per year from 1998 to 2000 [2].

However, due to this recent demand, cultivation spread from the mountains to plain areas and methods of cultivation moved away from traditional organic practices. To recognise and value traditional, local production, the mountain community of Garfagnana acquired European recognition for Protected Geographical Indication (PGI) in 1996. The regulations for the Garfagnana emmer variety included a description of the genotype adapted to the local climate and terrain and prescribed agronomic practices for production. Regulated by the Italian Association for Organic Agriculture (AIAB), these prescribed practices include rotations with meadows, prohibition of the use of chemical pesticides, herbicides and fertilizers and the mandatory use of seeds coming from local populations [2]. Producers now receive a price up to 30 percent higher than hull wheat without a geographical indication label [3]. Production also boosts the local economy which faces socio-economic problems like the other mountainous regions of Italy.

Nonetheless, the emmer wheat comeback is not limited to Italy. Due to the species’ high protein content and tolerance to drought it is viewed to have the potential to improve nutrition, boost food security, foster rural development and support sustainable agriculture in Africa [4]. Moreover, emmer varieties provide a supply of useful genes in wheat breeding due to inherent resistance to rusts, powdery mildew, tolerance to heat and drought, and suitability to marginal lands [5]. Indeed, productivity gains in wheat production in India during the green revolution might not have happened if it were not for the Sr2 (stem rust resistance) gene from emmer wheat [5].

Punjab: Paying a High Price to be India’s Granary

The green revolution first came to India through Punjab. Initially seeming to heap the greatest benefit from improvements in yields, Punjab has now plateaued in terms of productivity and production [6]. Moreover, productivity increases happened because of the increasing use of costly inputs such as pesticides, fertilisers and seeds. Farmers have limited financial resources; therefore, unavoidably farmers borrow money to cover these costs. Economic studies conducted throughout Punjab provide clear evidence of considerable economic hardship in many farming communities [7]. Specifically, farm debt has been estimated to be 760,000 rupees per farming household [6]. From economic strife, social issues inevitably follow, the most notable being farmer suicides. Between 2000 and 2010, almost 7,000 farmer suicides were recorded in Punjab. Alarmingly, 7,000 suicides have been reported in the past five years indicating a potentially significant increase in suicide rates [8]. To address this issues, many have argued for a transformative shift in agricultural practices in the region [9]. Indeed, many farmers in Punjab are converting to organic or natural farming. However, on a recent visit to Punjab, I learned that some farmers recently abandoned organic cultivation when they were unable to attract a strong enough price for their product. Clearly the work of the Art of Living in securing markets for Sona Moti is paramount.

Sona Moti: Starting with a Handful of Gold

Nagpal, a farmer with the Art of Living, describes his initial experiences with Sona Moti.

“Five years ago, I visited Pingalwara ashram in Amritsar with my friends. We visited the ashram to learn about natural farming. The in-charge of that ashram told us about a different variety of wheat which is sugar free. They gave us a handful of wheat in a form of parshad (holy gift) and they advised us to grow this wheat for the sake of humanity. I grew that wheat (parshad) and first year the yield was only 3 kg. And second year the yield of wheat was 80 kg and slowly- slowly after five years with the grace of God we have 40 Qt wheat this time.”

Sona Moti possesses nutritional qualities that attracts a higher price. The low sugar content of Sona Moti makes it ideal for diabetic patients. Moreover, Sona Moti has three times the folic acid compared to any other grain, and an exceptionally high mineral and protein content. These qualities would not be known and would not be conveyed to customers if it were not for the work of the Art of Living.

For continued success, the integrity of the product must be maintained. Pingalwara Ashram chose a most suitable farmer to entrust with the seed. Not all farmers take the care necessary, and have the knowledge for seed conservation. Nagpal has been training farmers in techniques to avoid cross-pollination and seed contamination to ensure the purity of the seed and product integrity. Indeed, Nagpal felt reluctant to share the seed with farmers who did not have the knowledge to maintain seed purity.

Experts argue that further increases in emmer wheat cultivation require a well-organised, transparent and traceable production chain [5]. Interestingly, tracing the source of this wheat prior to its cultivation at the Pingalwara ashram has been a challenge. It came to Punjab by way of an unnamed farmer on a Yatra (pilgrimage). Cycling and walking from Southern India, he brought two plants of the wheat variety.  We are not able to credit this farmer due to a lack of traceability. The future of Sona Moti production will include traceability, so that future farmers are ensured proper credit for their work.