In the next post in the ongoing series on The Sustainable Seed Innovations Project, Natalie Kopytko, Post-Doctoral Research Associate at University of Leeds shares stories of farmers creating model farms to educate others about natural farming methods. The cultivation techniques are a crucial aspect to sustainable innovations; moreover, this story discusses community support and socio-economic sustainability.

Model Farms and Farmers in Seva

Cultivation of traditional varieties, often termed Desi seeds, require no external inputs (chemical fertilizers or pesticides).  These ‘natural farming’ methods work with nature, specifically the local environmental conditions, rather than attempting to create uniformity by controlling nature, as is the case of conventional agriculture.  In this manner, the natural conditions and the knowledge of the farmer select seeds with new, adapted varieties eventually developing over time. Nature and farmers are partners in sustainable seed innovation.

This story highlights the work of Punjabi and Chhattisgarhi farmers in seva[i] , as they develop model farms to inspire and teach other farmers about natural farming. These farmers either hold another occupation, in addition to their time spent farming, or have moved from more lucrative employment to full-time farming. Their farms and their work are crucial to building human capital, creating social capital through networks, and ultimately realising greater economic sustainability (financial capital) for farmers in their communities.

Nonetheless, in many regions of India, conventional agriculture and not traditional/natural farming has become the norm. This is particularly true in Punjab where the Green Revolution started in India. Change can be difficult, especially when that change concerns one’s livelihood.  Our first farmer in seva hopes to make this change easier for farmers in Punjab. 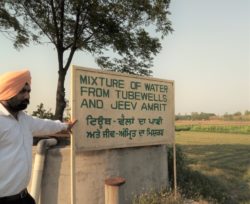 Inspired both indirectly and directly by Pingalwara model farm near Amritsar, Advocate Gursher Singh Gill now works to develop his own model farm to inspire others. Along with demonstrating cultivation techniques, Gursher made developing an economic model a priority to facilitate the change to natural farming. Moreover, with an economic model to support farmers, they will be less likely to switch back to conventional practices after perceived failures in natural farming. Gursher expresses his concerns by stating, “If one farmer leaves natural farming, they probably won’t come back for generations.” The economic model that he has been using successfully on his own farm involves matching two farms directly with ten families in the local area. One farm can grow 10-15 different crops; and therefore, produce all the fruit, vegetables, rice, wheat and other grains needed by the families. Two farms support ten families with all their nutritional needs, or one can say that ten families support the livelihoods of two farming families. This model achieves financial security for farmers, nutritional security for local families, and environmental sustainability by following a local production-consumption paradigm.

While Gursher develops an economic model, the indirect inspiration he received from the Pingalwara model farm, in the first instance, demonstrates the importance of social capital and networks. Ranjit Singh Bath’s father was the first farmer in the region to switch to natural farming after receiving inspiration from Pingalwara farm. Ranjit’s father then inspired many others including Gursher, while also providing much needed guidance on dealing with pests. As described next, the work of the farmers in Chhattisgarh exemplify the importance of building social capital.

Creating the Culture of the Village with Model Farms in Chhattisgarh 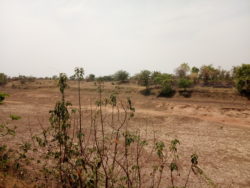 Stark evidence of decreasing water levels. For the last 3 years, the Mani-hari river in Chhattisgarh has been completely dry for a period. The first time in memories of local farmers

Yash Mishra runs a stationery business; however, his real passion lies with caring for the environment. To begin with he planted trees in cities, then, after visiting local villages, he became concerned about the impacts of conventional farming. He attributes local decreases in soil fertility, depletion of water levels, and increases in health problems to conventional farming, while at the same time burdening farmers with the increasing costs of inputs. These observations, along with inspiration provided by Sri Sri Ravi Shankar, motivated Yash Mishra to be a natural farmer, create a model farm and educate others about natural farming. 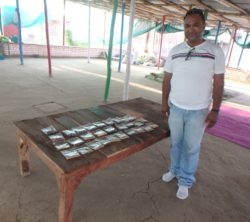 Yash Mishra stands next to desi seeds at his model farm.

At the heart of Yash’s work was a revival of seed systems. The search for seeds in wild forests and tribal areas involved YLTP students and Art of Living volunteers. As local tribal women said in discussions, everyone is always searching for seeds. An integral part of Indian culture necessitates helping each other; one manifestation of this cultural trait involves the sharing and exchanging of seeds. Yash expresses his wish to resurrect the ‘culture of the village’ through the creation of seed banks and sharing of seeds. He promotes a model where every village develops at least five kinds of seeds on their own. The villages not only conserve the seed, but also test the seeds to understand germination rates along with other properties.

Yash is not the only farmer in seva in the region. Once a professional hairstylist, Shilpi Rajput returned to natural farming five years ago due to a desire to give back. Again, she explained that small farmers no longer have an awareness of natural farming techniques. She stresses that she needs to develop her own farm to provide an example for other farmers to follow. Along with training farmers, Shilpi works to create markets to help small farmers financially as they return to traditional farming, beginning with Basmati rice. 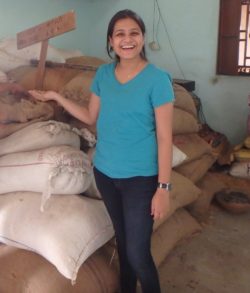 Shilpi Rajput stands next to her harvest.

The great innovator Thomas Edison said, “Genius is one percent inspiration and ninety-nine percent perspiration”. It might be only 1%, but inspiration is still a requirement for innovation. These inspired farmers not only inspire other farmers through their model farms; they also ensure more success and less toil for future natural farmers. They do so by developing economic and social models, while also teaching the techniques of natural farming. When properly equipped with this knowledge these farmers will succeed, with 99% perspiration.

[i] Seva is the Sanskrit word for self-less service as part of spiritual practice.