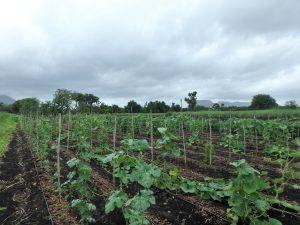 iii) Blockchain/DLT and In Situ Innovations with Agrobiodiversity

As discussed in above, three major hurdles that need to be overcome in order to facilitate sustainable seed innovations (especially by small farmers) as well as monetization of sustainable seed  innovations for the benefit of small farmers and their rural communities are: (i) the issue of traceability: the origin of indigenous seeds is rather difficult to trace to source, in part because such seeds often don’t have one common or popular name with which they are known across a nation or region, and in part because the phenotypic characteristics of such seeds are very likely to change with every new season or every new region or condition (climate, soil) in which they are cultivated; (ii) the issue of trust: lack of trust among farmers as well as national governments, that persons or institutions that take ‘samples’ of the seeds will indeed share benefits with farmers, results in farmers’ growing unwillingness to share seeds (or know-how associated with their cultivation) with scientists, as well as national governments’ adoption of incredibly strict bureaucratic hurdles for any party that seeks to access (agro)biodiversity from within their territories; and (iii) the general lack of monetary incentives to cultivate using indigenous seeds (as discussed above).[1] Adding to this lack of monetary incentives, is the lack of adequate education/know how among several farmers on how cultivating indigenous seeds using TEK based farming systems can help maximize environmental and economic gains of farmers (see Prongs 1 and Prong 2); currently, because of the systematic ‘education’ of farmers solely in support of ‘conventional farming’ since the Green Revolution, farmers see economic gains only in high yields promised by “improved/proprietary” varieties.

These hurdles not only lead to sub-optimal in situ innovation with and conservation of agrobiodiversity, but also disincentivize R&D with agrobiodiversity, and/or honest access and use practices.[2] In both instances, the loser is the farmer – (i) sub-optimal incentives and know-how (education) on why and how to cultivate crops using indigenous seeds and TEK based farming systems (that also support agrobiodiversity conservation and improvement), leads to dependence on capital intensive farming that, over time, can lead to severe soil degradation[3] and also progressive economic indebtedness of farmers,[4]  and (ii) lack of research on and with agrobiodiversity or lack of honest disclosure of source of researched agrobiodiversity, prevents farmers from getting monetary benefits in the form of royalties or ‘benefit sharing,’ leading to further lack of incentives to continue cultivating indigenous seeds. It is also likely that lack of trust and competition among farmers will disincentivize farmer to farmer sharing of indigenous seeds, to the detriment of beneficial spread and region-specific evolution of agrobiodiversity, as well as the erosion of cultures of seed sharing.[5]

The features of blockchain/DLT technology discussed above, can help overcome the issues of lack of trust and traceability (see Annex 3 and Annex 4 for examples of how this can potentially be done[6]). However, to provide stronger economic incentives for agrobiodiversity conservations and associated research and in situ sustainable seed innovations, it is necessary also to link blockchain technologies, not only with automated payment systems, but also automated (monetary) reward systems.

In this context, it is necessary, at the outset, to distinguish digital currencies from cryptocurrencies (commonly linked with blockchain). Currencies, including digital currencies, are essentially a medium of storing and trading ‘value’.[7] In fact, digital currencies are already very much in use in several (or even most) parts of the globe. These digital currencies exist in two forms: in the form of digital payment systems (such as credit cards), and in the form of digital reward points (such as airline mileage points, grocery and other marketplace purchase points or customer loyalty points, all of which are examples of digital currencies that are then used to purchase other products or services, e.g. upgrades on airlines). Cryptocurrencies are not yet in widespread use, but across the globe, several countries have either already embraced them, or are in the process of so doing.[8] This is so from a legal as well as technological perspective – Switzerland, for example, is very active is developing and adopting legislation supporting cryptocurrencies. Corporations such as Facebook  (albeit under severe legal/regulatory scrutiny and mistrust) recently launched their own cryptocurrency (or ‘virtual money ‘) based payment system backed (apparently/allegedly) by blockchain technology and the US dollar (to prevent problems of volatility that cause a significant part of the public and regulatory discomfort with the technology).[9]

Leaving aside the uncomfortable topic of cryptocurrencies, it is worth investigating whether blockchain facilitated mechanisms to incentivize research and in situ innovation with agrobiodiversity can be linked with a simpler (non-cryptographic and low energy consuming) automated point granting systems similar to the “carbon points” system that can support what is commonly known as “carbon trading” or “emission trading .” Such points can then be used to get real cash from one or more of several possible sources, such as:

The cash collected from any of the above sources in return for biodiversity points, can then be put to various uses by those who encash them. For example, farmer communities that obtain points in the system, can use the cash obtained from exchanging them, for rural community development or to support pension payments for aging farmers etc. Researchers or the scientific community that gets such points can use the cash obtained from their exchange, for further research supporting the cause of sustainable seed innovations. The points-based rewards system can thus support the institutionalization of productivity claims (see the blog post on Prong 2).

It is necessary to explain here that a smart contract facilitated payment-based system (e.g. a one-time payment or an automatic payment of royalty to originators of seed innovations, namely small farmers) must also be supported by a point-based rewards system, because the point-based rewards system creates incentives for downstream users and researchers to use rather than avoid the blockchain facilitated system. The point-based reward system would do so in two ways: (i) by ensuring that points collected can be exchanged for cash from one (or more) of the above suggested sources, and (ii) by permitting the specific contribution of each farmer/farmer community and research institutions to be immutably recorded and known to the rest of the world. Therefore, if any research and innovation with PGRs is done ‘outside’ the system (e.g. through illegally acquired PGRs), neither the farmer contributor of the PGRs, nor the downstream researchers (whether these be other farmers or scientists) will get point-based rewards for value addition.[10] Here, is it noteworthy that while blockchain supports anonymization of users if so designed, systems can also be designed that facilitate (limited or conditional) disclosure of identities of contributing parties, if they so desire, or in case of need (e.g. for purposes of legal enforcement, facilitation of payments/encashment and/or correction of technical glitches).

It is perhaps relevant to note here that in order for the world (including, especially, the small and marginal farmers of the world) to truly benefit from cryptocurrencies or even from a (biodiversity) point based incentive mechanisms facilitated by blockchain technology, it is necessary to re-think and re-understand the meaning of the term ‘value’.[11] Blockchain is called the internet of value. Yet, the meaning of ‘value’ is not only broad and context driven, but is also very subjective.[12] Indeed, it has been rightly said that “something has value primarily because people believe it has value.” Blockchain as a broader technology (beyond bitcoin) permits the capture, store, release and trading of value like never before.[13] With this understanding, actively engaging with and using this technology under appropriately designed regulations and ethics codes, to create applications and infrastructure focused on incentivizing sustainable seed innovations, and creating new markets for agrobiodiversity and plant genetic resources may therefore lead to very promising results, enhancing environmental health, small farmer incomes, as well as national GDP.

It is perhaps relevant to note here that in order for the world (including, especially, the small and marginal farmers of the world) to truly benefit from cryptocurrencies or even from (biodiversity) point based incentive mechanisms facilitated by blockchain technology, it is necessary to re-think and re-understand the meaning of the term ‘value’.[14] Blockchain is called the internet of value. Yet, the meaning of ‘value’ is not only broad and context driven, but is also very subjective.[15] Indeed, and it has been rightly said that “something has value primarily because people believe it has value.” However, blockchain as a broader technology (beyond bitcoin) permits the capture, store, release and trading of value like never before.[16] With this understanding, actively engaging with and using this technology under appropriately designed regulations and ethics codes, to create applications and infrastructure focused on incentivizing sustainable seed innovations, and creating new markets for agrobiodiversity and plant genetic resources may therefore lead to very promising results, enhancing environmental health, small farmer incomes, as well as national GDP. Preliminary frameworks recommending the means in which this technology can be deployed for promoting sustainable seed innovations have been described in this article here, and under Annex 3 and Annex 4 of the forthcoming Position Paper.

[5] Research has shown that in regions where improved/uniform seeds become the norm, the culture of seed sharing and seed exchange starts to become less prominent, perhaps because ‘uniform’ (HYV and hybrid) seeds need to be purchased afresh from the market each season and do not give desired yields in subsequent generations of cultivation (F2 onwards). See Kochupillai, (2016)., pp. 208-212 and pp. 50-63.

[10] For a more detailed explanation of how blockchain can incentivize value creation and value addition to agrobiodiversity, see Kochupillai, (2019a).