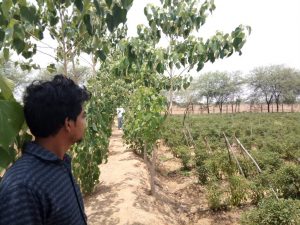 Prong 3 of the Sustainable Seed Innovations Project comes while India is looking to adopt various blockchain solutions (including blockchain based payment systems) on the one hand, and debating a ban on cryptocurrencies on the other. This three-part blog post (the next in the ongoing blog post series on The Sustainable Seed Innovations Project) provides readers an easy to understand overview of the key beneficial features of blockchain technology, how the potential use cases of blockchain technology go well beyond the financial services sector, and, most importantly, how this technology is highly promising for the cause of promoting and incentivizing sustainable seed innovations.

As discussed by Greg Radick in Prong 2, the move from IP-Narrow, which focuses only on pigeon holes of existing intellectual property rights and ‘priority claims’, it is necessary to make a shift towards IP-Broad systems that respect ‘productivity claims.’ In a broad sense, productivity claims are a kind of ‘right to attribution.’ Within existing intellectual property rights regimes, however, only copyright law (within its ‘moral rights’ framework) recognizes and protects the right to attribution. Within patents and plant breeders’ rights regimes, such a system does not exist – these regimes operate on a ‘first come’ basis. Other legislations, notably the CBD, the Nagoya Protocol and the Seed Treaty, have attempted to establish systems that recognize and reward a type of “productivity claim”, particularly of communities that have contributed their PGRs for further downstream research and development. However, as is seen in the context of global attempts to mandate access and benefit sharing regimes vis-à-vis access and use of PGRs under these regulations, protecting the right to attribution, and thereby recognizing and rewarding productivity claims, has not been easy in practice. In fact, the system has met with little, if any, success. In this section, we look at the key features of an emerging technological solution, namely Digital Ledger Technologies (DLT), and a more recently evolved version of DLTs, namely, blockchain, to see if technology can assist in implementing the letter and spirit of well-meaning international treaties such as the CBD and the Seed Treaty. Forthcoming blog posts (and Section III of the Position Paper) will then look at what changes are needed in existing legal regimes to ensure smooth roll out of the three prongs, to further strengthen the technological systems and to ensure that these are themselves subject to optimal legal regulation and ethical codes to avoid any misuse.

However, research has shown that farmer-custodians of agrobiodiversity have little incentive to continue using, cultivating and improving landraces, locally suited indigenous/traditional seeds or planting materials and farmers’ varieties (and thereby conserving the PGRs therein), especially when faced with the option of cultivating formally improved, high yielding varieties.[1] This situation is exacerbated as farmers are unable to secure a regular market and good price for their varieties, in part, because farmers’ varieties are inappropriate candidates for protection under existing intellectual property protection regimes, especially in their current narrow/formal construction (as discussed in Prong 2 above).[2]

The culture of sharing prevalent among farmers,[3] coupled with their inability to monitor the chain of transfer of ownership as well as the specific end use(s) to which their varieties are put (e.g. simple consumption or downstream research), also currently act as barriers preventing the emergence of robust and profitable marketplaces that support sustainable use and monetization of PGRs,[4] especially for the benefit of small and marginal farmers, that are by far, especially, but not exclusively in countries like India, the sole or primary custodians, generators and in situ improvers of PGRs.[5] While several regulations in India (and globally), notably the Biodiversity Act, 2000 as well as the Protection of Plant Varieties and Farmers Rights Act, 2001 seek to secure benefits for farmers via ‘benefit sharing’ mechanisms, according to research, the number of cases of benefit sharing have been low to non-existent.[6] These regulations, have, in short, been unable to facilitate the tracing and/or honest and comprehensive documentation of uses to which farmers’ PGRs have been put. It has been challenging, to say the least, to implement access and benefit sharing (ABS) systems, including those established under the CBD, the Seed Treaty, as well as under various national laws that implement its letter and spirit.[7]

Accordingly, in addition to recommending large scale (re)education, the SSI 1.0 expert working groups made several observations and recommendations highlighting the relevance of the traceability of any and all indigenous seeds to source. It is relevant to note here that unlike proprietary seeds that can be recognized by unique, uniform features that are registered in the Plant Variety Register, the inherent variability of traditional/indigenous seeds, which is also their greatest asset, lead them to display varying phenotypic characteristics in each growing season,[8] and in every different location they are cultivated in,[9] making it difficult to recognize their true origin. While these seeds may be, broadly speaking, more easily identifiable by their unique nutritional or other features when grown in specific regions and soils, they will inevitably change their appearance, which is the currently the most important (and the quickest) means through which infringements of plant breeders rights are recognized.[10] Absence of any means of tracking/tracing farmers’ indigenous seeds to source, leads, again, to lack of any means of ensuring monetary benefits for those who are originators and preservers/improvers of indigenous seeds in various/diverse locations. This, again, systematically removes all monetary incentives for (small) farmers to engage with in situ agrobiodiversity conservation, improvement and dissemination. In the following sub-section, we look at how an emerging technology may be able to assist in overcoming problems of trust, traceability and lack of incentives that currently prevent optimal and sustainable seed innovations by and for the benefit of small farmers.

Parts II and III of this three part blog post discuss how key features of DLT/Blockchain technology can potentially help overcome each of the above identified hurdles.