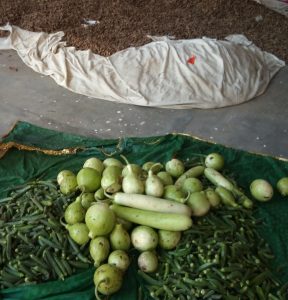 In the context of the Seed Treaty (and the Indian PPV & FR Act, 2001), it is necessary to re-think the current legal provisions that mandate benefit sharing only if the downstream research with PGRs is protected by intellectual property rights.[1] It may be possible to justify this current limitation if we start with the outdated scientific understanding that the Mendellian “genes for traits” (and associated management of soil and water so as to keep them as uniform as possible) approach is the only way to accomplish food (and nutritional) security (See Prong 2).[2] In other words, under this older scientific understanding, it was (and in several pockets, it is still believed) that uniform varieties are better and more necessary for food security than heterogenous, non-uniform varieties.[3] If this is the understanding we start with, the rationale behind granting a share of benefits to farmer-contributors of PGRs only if downstream improved seeds are protected by PGRs, seems to be as follows: in exchange for contributing PGRs, farmer-contributors of PGRs (eventually) get access to “improved” seeds that are not protected by IPRs, and this is “benefit sharing” enough, because (at least hypothetically speaking), farmers can then save seeds from season to season and save costs associated with buying proprietary seeds from the market each season, or can compensate for seed costs by getting much higher yields (and therefore, higher profits) than they could with indigenous heterogenous seeds.

However, there are other facts, backed by growing scientific and empirical research, to be considered, namely: (i) “improved” seeds do not work well in marginal environments, not least because breeders rarely focus their research in resource poor areas.[4] More specifically, they do not work well without external (chemical) inputs that stabilize the environment in which they are cultivated;[5] (ii) “improved” seeds that are “uniform” and rely on chemical inputs for their performance, have a negative impact on the environment and are not sustainable in the long run;[6] and (iii) cultivation with “improved” seeds that rely on chemical inputs is not economically profitable for farmers (especially small and marginal farmers, who often incur heavy debt to acquire these inputs),[7] and (iv) “improved”/uniform seeds lead to erosion of socio-cultural diversity associated with locally relevant crops and food.[8] The benefits obtained by small farmer contributors of PGRs even in cases where the “improved”, uniform seeds are not protected by IPRs, is not commensurate with the economic benefits derived by corporations or research institutions that utilize these PGRs.[9] In fact, the “exchange”, if any, in these circumstances is a bad deal for farmers and the environment alike.

On the other side of the spectrum, indigenous seeds do not (and are not engineered to) perform well in the presence of chemical fertilizers and pesticides. A farmland that adopts “uniform” seeds and “uniform” soils treated with chemical fertilizers and pesticides, is therefore likely to show reducing/diminishing yields when attempting (to go back to) using indigenous, heterogenous seeds.[10] Accordingly, once farmers have “converted” to conventional farming using uniform, “improved” varieties, they need monetary resources and economic incentives to go back to sustainable farming methods. These monetary incentives and resources are necessary for small farmers (especially at the start) because heterogenous seeds need heterogenous soils, i.e., soils that are rich in microbial diversity, as well as other biotic diversity that offers much needed ecosystem services,[11] and reconversion of “conventional”/chemically treated farms, back to natural/organic farms requires several months or longer. In the interim period, farmers will still have to face low quality and/or quantity of harvest, and will therefore need insurance coverage or other subsidies/compensations.

Farmer custodians of agrobiodiversity are not just stakeholders, but indispensable partners for the long-term continuation of formal innovations by the public and private sector seed, fertilizer and pesticide industry. Ethics, equity, economics as well as common sense, therefore, dictates that farmer-contributors of PGRs get royalties in addition to significant initial (bulk) payments for sharing their PGRs. As discussed in more detail in the following section (forthcoming in Section IV of the Position Paper), by incentivizing in situ agrobiodiversity conservation and improvement through adequately long-term benefit sharing with small farmers. such that both on soil (crop/seed) and in soil (beneficial microbial) diversity is protected and enhanced, the research community as well as the private sector (breeders and corporations) would also benefit in the long run[12]. How and why this is the case, will be discussed in Section IV of the forthcoming position paper.

Accordingly, it is necessary to re-think current laws limiting benefit sharing for PGR access only to cases where the downstream varieties (resulting from the use of PGRs), are protected by IPRs[13] or are utilized in a hybridization program.[14]

Looking beyond seeds, towards whole sustainable systems of agriculture (see Prong 1), it is noteworthy that for long term food and nutritional security, incentives and monetary benefits must be secured not only for farmers cultivating locally relevant indigenous (heterogenous) seeds. Incentives and monetary benefits must also accrue to (i) those (farmers/communities) who generate and share knowledge and information about how best to cultivate such seeds in specific local conditions, in the presence of specific types of biotic and abiotic stresses, to get best results (including yields, quality etc. See for example, Box 2: Jitul’s Story), and (ii) those who generate and share knowledge/information about how to optimize microbial populations within specific soil types and vis-à-vis specific crops.[15]

In the context of in soil microbial diversity also, the principles and spirit of the CBD and the Nagoya Protocol can perhaps be better accomplished with the help of DLT/Blockchain based solutions, coupled with AI/Machine learning solutions. The scientific understanding of the relevance of in soil microbial diversity (rhizobial bacteria[16] microbiomes[17] and holobionts[18]) and their interaction with plant roots and root bacteria has evolved considerably in recent years.[19] Accordingly, it is not just the commercial potential of PGRs that is growing, but also the commercial potential of soil microbial communities that can be used to create crop specific microbial rather than chemical fertilizers.[20]

In fact, soil microbial populations that get optimized with TEK based farming systems (see Prong 1) are unique to each location and to each crop.[21] Soil systems that are linked to TEK based farming systems are therefore like goldmines, provided systems are put into place that allow their value to be appropriately captured and benefits derived are equitably transferred to farmers and farming communities.[22] Blockchain/DLTs, (together with AI applications) can facilitate secure and ‘controllable’ data sharing by farmer-generators of this information/data, while ensuring fair, inclusive and equitable economic benefits for those sharing data[23] (In this context, look out for Section IV and Annex 3 in the forthcoming position paper).

If this information/data/know-how, once shared, were to generate monetary benefits for farmers contributing it, an equitable, sustainable and mutually beneficial system can be created. As of now, as discussed above, attracted to the ‘high yield’ promise, farmers abandon ‘high value’ cultivation[24] choices that are better for the environment and also better for their own long-term socio-economic prosperity.[25] India should therefore closely consider supporting the move to bring ‘digital sequence information’ associated with biodiversity originating in India, within the scope of the Nagoya Protocol.[26] At the same time, however, it must also be borne in mind that if this move is made without the parallel adoption of concrete means (such as DLT/Blockchain based solutions) that support the legitimate and traceable transfer of such digital information, it may lead to slowing down of globally beneficial research[27] or lead to increase in illegal/inequitable transfers of information.

As discussed above, farmers’ indigenous/heterogeneous seeds are not appropriate candidates for protection under existing intellectual property protection regimes (especially plant variety protection regimes), even when these are selected and improved in specific local conditions. Their inherent genetic variability makes them non-uniform and this non-uniformity is their greatest asset. Yet, this genetic variability makes them ineligible for plant variety protection certificates that require applicants to ensure that their plant varieties fulfill the so called DUS requirement. Under the DUS requirement, the variety that is seeking registration must be ‘Distinctive’, i.e., it must be distinctive from other varieties, must be ‘Uniform’ and must be ‘Stable’.

In other words, PVP regimes leave little room for indigenous varieties that are by their very nature variable and non-uniform, to be considered for PVP protection. More importantly, even if they were to be registered, indigenous/heterogenous seeds would not enjoy any meaningful protection as it would be difficult to detect infringement based on any declared phenotypic characteristics, as the phenotype of such heterogenous/indigenous seeds would vary from location to location and depending on soil health, biotic and abiotic conditions.[28]

With intellectual property protection regimes being designed to protect and incentivize R&D in uniform varieties, and governmental policies recommending frequent seed replacement via market purchase of such seeds,[29] economic incentives, again, shift away from cultivation of non-uniform, indigenous seeds using farming systems that promote seed and soil health and diversity.[30]  Again, therefore, in order to rebalance the incentives landscape[31], an equitable transfer of monetary benefits (in the form of initial bulk payments as well as% of profits/royalty payments) must be ensured in each instance of PGR (or soil microbial diversity) transfer.

In the absence of underlying statutory provisions mandating such royalty payments, PGRs shared by any farmer or community must be seen as a transfer of know-how/knowledge or as a transfer of data (and not as a transfer of ‘materials’[32]). Further, such transfers must always be done under written contracts, where under, the royalties must be payable for the ‘term of the contract.’ Current intellectual property and PVP laws that do not grant IP rights to indigenous/heterogenous materials might need to be amended to require such royalty payments (or ‘terms of contract’) to last for at least as many years as IP protection over a corresponding ‘improved’/uniform variety would have lasted if it were applied for and granted.

Of course, one might argue that this written contract-based transfer is already what is required under biodiversity protection and PVP laws.[33] However, as the implementation of such laws is problematic (as discussed above), and meaningful IP protection does not exist for indigenous/heterogenous materials, again, a blockchain/DLT solution may be necessary and useful in facilitating automated contractual agreements and payments of micro-royalties through deployment of ‘smart contracts.’[34] The adoption of such automated mechanisms must be supported by necessary amendments to  the PVP and Biodiversity protection laws.

Further, it is noteworthy here that negative externalities and market failures resulting from the increasingly widespread adoption of formally improved seeds[35] that comprise primarily of uniform varieties, are currently not accounted for in the price of these seeds and planting materials. Accordingly, the imposition of a kind of a ‘Piguvian Tax’ (previously referred to in Prong 3 as a possible “biodiversity tax”) on “uniform” seeds should be considered on priority by the Government of India.[36] As discussed under Prong 3, the money collected through such a taxation scheme can then go to those who get automated token/award points for conducting research on/with agrobiodiversity/PGRs, and with such research enhancing the ‘value’ of the PGRs and the agrobiodiversity in which they are contained.[37]

[10] While further research is needed to confirm this, anecdotal evidence from farmer interviews and observations made during empirical research, suggests such trends. See Kochupillai, 2016 at pp.87

[22] To understand the concept of ‘capturing’ value in soil and seed diversity, see Kochupillai, (2019a).

[32] Mostly, PGRs are transferred under ‚Material Transfer Agreements‘ and, as discussed above, there is no requirement to share benefits unless the downstream creations are protected by IPRs. However, it is currently very difficult to trace the exact use to which any material transferred under such agreements was put, not least because most countries do not mandate disclosure of origin of PGRs under patent or PVP laws.  Le Buanec, (2005).