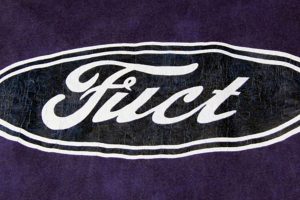 We’re pleased to bring to you a guest post by our fellowship applicant, Akanshha Agrawal. Akanshha is a 3rd year student at National Law University, Delhi. This is her first submission for the Fellowship. In  this post, Akanshha discusses the recent US Supreme Court judgment in Iancu v. Brunetti, which held the Lanham Act’s ‘immoral or scandalous’ bar on the registration of trademarks to be unconstitutional.

In June this year, the US Supreme Court, in Iancu v. Brunetti, had held that the ‘immoral or scandalous’ bar on the registration of trademarks under the Lanham Act violates the right to freedom of speech and expression guaranteed by the First Amendment to the US Constitution as it amounts to view point discrimination. The Court here followed its decision in Matal v. Tam (‘Tam’) from two years ago, where it had declared the Lanham Act’s bar on registration of disparaging trademarks to be unconstitutional for the same reason. The decision was analysed on the blog here and here.

The Respondent, Erik Brunetti and his partner Natas Kaupas started the streetwear clothing brand FUCT in 1990. FUCT was widely known as an acronym for “Friends U Can’t Trust”. In 2011, Brunetti sought to obtain registration for its trademark ‘FUCT’ under class 25 for athletic apparel. The US Patent and Trademark Office (‘PTO’) denied registration under a provision of the Lanham Act that prohibits registration of trademarks that consist of or comprise immoral or scandalous matter. It used the Urban Dictionary to determine that the term ‘FUCT’ is the phonetic equivalent of the past tense of ‘FUCK’ i.e. ‘FUCKED’, and thus immoral and scandalous. The decision was upheld by the PTO’s Trademark Trial and Appeal Board upon review. Following this, Brunetti appealed to the US Court of Appeals for the Federal Circuit. The Court of Appeals reversed the Board’s decision, ruling that the ‘immoral or scandalous’ bar on trademark registration violates the rights guaranteed under the First Amendment and is thus unconstitutional. Upon appeal, the Court of Appeal’s decision was upheld by the US Supreme Court.

Analysis of the Court

In Iancu v. Brunetti (‘Brunetti‘), the Court followed Tam and held that similar to the disparagement clause, the bar on registration of immoral and scandalous marks also amounts to viewpoint discrimination. Justice Kagan, writing the opinion of the Court, took into consideration the rejections and registrations of trademarks by the PTO in the past. She observed that the PTO has denied registration to marks such as ‘YOU CAN’T SPELL HEALTHCARE WITHOUT THC or KO KANE’ because such marks are deemed scandalous for inappropriately glamorizing drug use. These are marks expressing opinions that most Americans would find offensive. However, the PTO has granted registration for marks such as ‘D.A.R.E. TO RESIST DRUGS AND VIOLENCE’ or ‘SAY NO TO DRUGS – REALITY IS THE BEST TRIP IN LIFE’. Justice Kagan observed that it is quite obvious that the government is favouring certain ideas, which is facilitated by the Lanham Act. This cannot satisfy the scrutiny of the First Amendment. Therefore, the Court held the immoral or scandalous bar to be unconstitutional.

Implications of Brunetti on Trademark Law

The Court in Brunetti followed the principle laid down in Tam recognising that the primary purpose of trademark registration is ensuring source identification, and addition of any filters to such registration, such as the disparagement clause does not serve any purpose. Due to this, brands that were unable to register their marks earlier will be able to obtain the same now. This will allow such brands to successfully exploit the goodwill generated by them. Even though the companies were always free to use immoral or scandalous marks, they will now be able to enjoy the protection granted by trademark registration.

Even though the Court unanimously held the immoral and scandalous bar as unconstitutional, there were certain concerns on the implications that it might have. Justice Sotomayor, joined by Justice Breyer, expressed some discomfort with completely getting rid of any such bar on registration of trademarks, particularly expressing concern with registration of racial slurs. In her opinion, applicants are now going to rush to register vulgar marks and the government will be powerless to say no. A legislative action was suggested which seems necessary to ensure that the law is not abused. Vulgar marks will inevitably come up for registration and a careful legislative action will help to ensure protection from the same. However, I find it difficult to believe that the judgement will actually have such a horrifying effect as described by Justice Sotomayor. It is quite unlikely that vulgar marks will come up for registration in a mass scale. Selection and registration of marks is an important business decision and the companies would be reluctant to invest in marks that will not be accepted by the public. Therefore, the companies have a valid incentive to not file for vulgar or socially unacceptable marks.

An important concern raised by the case is the ease with which the Court accepted the user generated content from Urban Dictionary as valid evidence of the meaning of a word. This could give rise to some serious issues with respect to trademark registration in the future. Brunetti gives the applicant an opportunity to simply create certain content in relation to its mark on any user generated website and then use it as evidence while arguing for registration of that mark. Further, it is important to remember that even though the bar on scandalous or immoral trademarks has been held to be unconstitutional, there’s still a bar on registration of trademarks which bring contempt or disrepute. The case gives the rival companies an opportunity to generate contemptuous definitions of their competitors’ marks to argue against their registration.

What about the ‘Scandalous or Obscene’ Bar on Registration of Marks in India?

Similar to the US Lanham Act, the Indian Trade Marks Act, 1999 also provides certain absolute grounds for refusal of registration of trademarks. One such ground is the mark being scandalous or obscene. In the wake of Brunetti, it is important to revisit the provision that prohibits registration of such marks (Section 9(2)(c)) and assess whether it can pass the scrutiny of free speech jurisprudence in India.