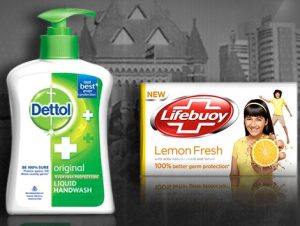 The case came to the court after the HUL (‘Plaintiff’) came across RB’s (Defendant) advertisement promoting its Dettol handwash, which portrayed that bar/solid soaps aren’t as effective as the liquid soap for washing hands, which is particularly important for tackling COVID-19. The contention put forth by HUL was two-fold. First, that the Dettol handwash ad disparaged Lifebuoy soaps by showing a soap with the same shape, configuration and color as HUL’s registered red Lifebuoy soap; and second, by copying HUL’s advertisement which was published earlier. In its plaint, HUL claimed that while it was trying to promote awareness about COVID-19 by encouraging the habit of regularly washing hands, using not just Lifebuoy soaps, but rather any soap, the Defendant was aiming to disparage and denigrate HUL’s product.

HUL made a claim that in light of the World Health Organization’s guidelines to use soap and water for regular hand washing, the Dettol ad allegedly creates a scare and falsely propagates that soaps are ineffective. The plaint said –

…Nations across the world are communicating just the opposite and asking people to wash their hands with soaps and water whereas the Defendant is creating scare amongst the general public by falsely propagating that soaps are useless by maligning the market leader in the soaps category. When the need of the hour is for everyone to come together and work towards common good, the Defendant’s action is irresponsible and against public morality.

For this, HUL sought Rs. 1 crore in damages and a permanent injunction against RB. This matter was heard by a single-judge Bombay High Court bench headed by Justice. K R Sriram. Before the suit could venture into substantial claims and averments, RB agreed to suspend the use of the impugned ad from 12 PM March 22, 2020 to April 21, 2020, for a period of one month.

What the Precedents Hold?

In Reckitt Benckiser v. HUL, the Delhi High Court held that an ‘orange bar soap’ could easily be identified as the Plaintiff’s product, the Dettol soap, and hence held in favor of them in a disparagement case that is very similar to the current case.  The Amul case looked into what effect a claim based on common parlance can have on the public (the claim was regarding the use of Vanaspati in frozen desserts). Glaxo held that a more particular and precise claim will have a higher and more serious effect on the public. All these cases were decided in favor of the plaintiff.

The defenses available against the same are contained in Section 30(1) of the Trade Marks Act which states that an advertisement will not be considered to be infringing if it is in accordance with the honest practices followed in industrial or commercial matters and if it does not take an unfair advantage/ is not detrimental to a distinctive trademark. Often times, even the commercial free speech argument is invoked as a defense against a disparagement claim as Art. 19(1)(a) of the Constitution protects commercial speech that is not unfair, misleading or untruthful.

Is There a Prima Facie Case?

While the Dettol advertisement is no longer available for us to be able to check the claims made by HUL, both the parties are not new to comparative advertising. (You can read our posts on comparative advertising here and disparagement in advertising here and here) Given the claims of HUL, a question arises if RB’s puffery of its product is permitted given Section 30 of the Trade Marks Act, which allows the same as long as there is no detrimental effect to a rival’s registered mark. As per the reports available, HUL is claiming that Dettol has made a false claim that bar soaps aren’t effective (1st requirement), which in turn leads to the deception of the consumer (2nd requirement), which further leads to them probably not wanting to use bar soaps during the pandemic, thus fulfilling the 3rd requirement of affecting consumer behavior.

While Dettol’s ad may have passed for puffery, if HUL’s claims about the ad are proved right, given the precedent, it would almost immediately be hit by Section 30 of the Trade Marks Act because the ad can be seen to have a detrimental effect against the Plaintiff’s product with respect to views on its efficacy, especially at a time when we are scrambling for a cure for the pandemic. Further, the persistence of the COVID-19 pandemic adds to the ‘disparaging’ effect that the Dettol ad may have on the Plaintiff’s product. Making a claim that deviates from one of the fundamental responses in light of the pandemic, that is, to wash hands with soap and water, may indeed affect consumer behavior.

However, the above argument is speculative in nature, based on the facts of the case available in the public domain. Since RB decided to suspend the ad and also given that courts are deciding to shut down themselves with matters pushed to more convenient dates and forums, we need to wait till  20th April, 2020, the date to which the parties consented for the matter to be pushed, to hear about the actual judgment in this case.