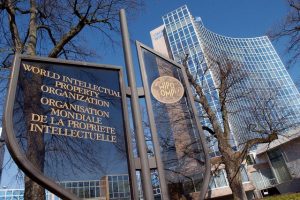 WIPO’s Geneva Act of the Lisbon Agreement on Appellations of Origin and Geographical Indications (“the Geneva Act”) was adopted on May 20, 2015. On February 26, the Geneva Act officially entered into force after the European Union acceded to the same. Currently, the Geneva Act is effective in 31 countries (Albania, Cambodia, North Korea, Samoa and 27 EU member countries).

How is the Geneva Act different from the Lisbon Agreement?

The enactment of the Geneva Act was a result of the reform of the Lisbon Agreement on the Protection of Appellations of Origin and their International Registration (“Lisbon Agreement”), which was initiated by WIPO in 2009 (our two-part post on the negotiations can be viewed here and here). While the Lisbon Agreement applies only to Appellations of Origin (AOO), namely, those names of products that have a particularly strong link with the place of origin, the Geneva Act extends that protection to all Geographical Indications (GIs) covered by the TRIPs definition. In other words, the Geneva Act offers protection for both GIs and AOOs. The difference between the two, which is more elaborated by WIPO in its FAQ section, is that the link with the place of origin must be stronger in the case of an appellation of origin.

The broader subject matter of protection accommodates the existing national or regional systems for the protection of distinctive designations in respect of origin-based quality products as well as the different national/regional GI systems that exist around the world. This makes the Geneva Act a more attractive treaty to those countries that have significant interest in GIs.

Salient features of the Geneva Act that may interest India

Considering the number of registered and pending GIs before the Indian GI Registry, it would be worth examining some of the salient features of the Geneva Act that may be of interest to India. I list these below:

Why should India consider acceding to the Geneva Act? 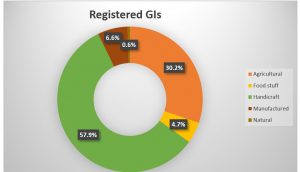 India’s rich cultural diversity has bred several GIs. As on date, India has 361 registered GIs and 222 pending applications under the Geographical Indications of Goods (Registration & Protection) Act, 1999 (“the GI Act”). Among the registered ones, 57.9% belongs to the category, “handicrafts”, and 30.2% belongs to the category, “agricultural” goods as can be gleaned from the doughnut chart on the right, which I created based on the data available on the website of the GI Registry.

Several of these goods are premium export products. Given that Indian handicrafts and textiles are often sought-after and considered exotic globally, several others would have definite potential to be high value export products. As per the statistics available on the website of Statista, a market and consumer data company, India has been seeing a steady increase of the exports in handicrafts since 2011. According to India Brand Equity Foundation, the top 10 destinations for export of Indian handicrafts are the US, the UK, the UAE, Germany, France, Latin American countries (LAC), Italy, the Netherlands, Canada and Australia. Similarly, India is the top most exporter of rice in the world and stands fourth in the world in tea exports. Needless to mention the high premium exports of Basmati rice (which is a different category of exports) and Darjeeling tea, in the category of teas.

When administered by well-oiled GI protection systems, GI tags reduce quality uncertainty, leading consumers to make quick purchasing decisions. Since consumers are often willing to pay a premium for origin-guaranteed goods, registering these names under the Geneva Act would only give an economic boost to scores of stakeholders in terms of foreign exchange.

Though there are serious gaps in the quality control measures under the GI Act, India is way ahead of several of its neighbours in GI protection. India could yet again take the lead by being the first in the region to accede to the Geneva Act. India’s accession to the Madrid Protocol in 2013 was preceded and followed by several impressive reforms to the trade mark protection process. It was also a catalyst in upgrading the systems at the Trade Mark Office. Similarly, the Government could use this as an opportunity to make the GI Act more robust by bringing in some much-needed amendments relating to quality control, and thereafter help these GIs get an international market access by joining the Geneva Act.