The Government released a public notice for the Patent Agent Examination 2020 sometime in February this year. Around the same time, we received information regarding a grievance to the Prime Minister’s Office on the Patent Agent Exam being conducted only in English and not in Hindi, even though patent applications are allowed to be filed both in English and Hindi. The other issues highlighted in another set of grievances relate to a few discrepancies concerning e-filing of patents in Hindi, non-publication of patent documents in Hindi and non-availability of updated and consolidated versions of the major IP Acts and Rules, Manuals, etc. in Hindi, which creates a gap between the rules on paper and the actual practice. This post looks into how these issues affect access to the patent system and its benefits and also its impact on innovation, particularly at the grassroots level.

A patent agent is a person certified by the law to handle patent applications. For the same, the DPIIT is supposed to conduct the Patent Agent Examination (PAE) every year and any person who holds a degree in science, engineering or technology or any equivalent degree (Section 126), can apply for the same. As per Section 127 of the Patents Act, an agent can practice before the Controller of Patents, prepare patent documents, transact businesses concerning patents, and discharge any such other functions.

As per Rule 9 and Rule 19 of the Patents Rules, patent applications, and other related documents can be filed either in English or Hindi. However, PAE is conducted by the Government only in English. In response to a grievance raised on this issue, the Government stated that “As per the Patent Rules, patent applications can be filed in Hindi or English. However, to be a patent agent, the work of a patent agent in English is also important. Hence, the exam is conducted in English. So that any Indian patent agent can apply for patents and do work related to it in English also other than in Hindi.” (translated from Hindi). This rather vague reply by the Government reveals a two-fold assumption. First, that the work of a patent agent cannot be done in Hindi alone and knowledge of English is necessary even though patent applications and other related documents can be filed even in Hindi. Second, that everyone taking the exam in English knows Hindi by default and can carry out the work in Hindi as well. Since patent applications can be filed in Hindi too, the documentation process and business transactions conducted by a patent agent can be done in Hindi and all other related work that happens in the Patent Office may be undertaken in Hindi (a requirement for mandatory filing of an English translation in the Rules is with respect to only international applications under the Patent Cooperation Treaty (PCT)). So apart from the fact that PAE does not take into account the need for proficiency in Hindi despite the Rules allowing the use of the same, it also actively creates an unnecessary barrier against patent filing, etc. by those who have proficiency in Hindi and have the qualifications to be a patent agent but are not proficient in English.

E-Facility for Patent Filing in Hindi

The second issue concerns the online filing facility for patent applications in Hindi. From a public grievance brought to our attention, it appears that the e-filing facility is not fully compatible with the use of Hindi for filing patent applications and the software often does not recognize the script being used. For instance, as pointed out in the grievance raised, a complete specification of a patent that was submitted online in Hindi earlier this year did not appear in the patent applications as published in the Patent Journal – thereby indicating that the online portal does not accept submission of specification in Hindi. This compatibility issue throws a spanner in the works as it would not only inconvenience the applicant/agent by requiring them to submit the details to the Office separately and pay fees for the publication of the application again but also render the patent search incomplete as the details for patents filed in Hindi may not come up in the search results. It may thus also deter filing of patents in Hindi, as e-filing is significantly more convenient and also a little cheaper than physical filing of patent applications.

Non-publication of Invention Details in Hindi

The public grievance, filed in 2017, relates to the publication of patent applications and related documents in English only. The Patent Office publishes a weekly journal in accordance with Section 145 of the Patents Act that covers information in respect of the various proceedings on patents including the details of patent applications and patents granted. The journal is published only in English and is unavailable in Hindi. As per the grievance, the patent monopoly is granted in exchange of full disclosure of an invention, but since the details of the invention are published only in English, they are inaccessible to a significant part of the population and thus full benefit of the disclosure is not realized. Accordingly, there was a request for amendment of Patent Rules to mandate publication of patent documents in Hindi also. In reply to the grievance, the Government stated that it would take the issue into consideration but there still seems to be no progress on the matter. 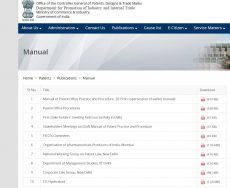 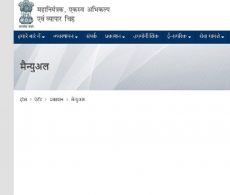 A look at the Patent Office website would show that many important (legislative and government) patent documents are also not published in Hindi. The Patent Manual and related documents and the consolidated and up-to-date version of the Patents Act and Rules are not available in Hindi (see here, here and here). Same is the case with other IP statutes (see here and here). This non-availability is despite the fact that Section 5 of the Official Languages Act, 1963 requires the publication of Hindi translations of all Central Acts, rules, regulations, etc. Also, while the English version of the Act and Rules is available both in searchable PDF as well as HTML format, the Hindi version of the Act and Rules available on the website (or on any other government website) are scanned copies for which the search function (which considering the length of these Acts, saves a lot of time) does not work.

Non-availability of Data on Patents Filed in Hindi

An interesting point to think about given these issues is whether the language barrier may possibly be one of the reasons for the low patent filing in India when Asia is responsible for almost 66.8% of patent applications filed worldwide (for patent statistics see here and for India’s patent statistics see here and here). Whether these numbers are truly indicative of innovation may be an open question but it is quite necessary to consider if there is a case for expanding functioning patent filing facilities to beyond English.

Other comparable jurisdictions where English often takes the place of a second language like China, Taiwan, Japan, and Korea while allowing for patent applications to be filed in English, make it mandatory to provide a translation in Chinese, Japanese and Korean respectively. While it is not possible to conclusively say that language has a direct impact on the number of patent applications filed, allowing patent applications to be filed in other prominently used languages apart from English and having adequate facilities for the same certainly does increase accessibility. This holds good especially for India where language acts as one of the many diversifying factors in the country. While the Patents Rules does recognize this and allow for the use of Hindi, presumably because of its official language status and because it is the most spoken language, the lack of adequate facilities to actualize the same does act as a potential hurdle in increasing patent filing which is one of the objectives under the National IPR Policy.

The IPR Policy pushes for outreach and promotion of IPR as its first objective and also recognizes the need to use IP promotion material in multiple languages (objective 1.2.8), yet there doesn’t seem to be much thought concerning the need to address the gap between the language used for innovation and those available for (English and Hindi in India’s case) translating the same into a form that would accrue them patent protection. Expanding the languages available for patent filing would also really help to tap into the potential of grassroots level innovation which can further a culture of learning and innovation that is recognized by formal legal mechanisms such as patents.

While it is easy to make an argument for expanding the languages available for patent filing beyond English and Hindi, the stark reality of the resources available to do the same asks us to reconsider the possibility of this working. While it would perhaps be optimal to allow for the PAE to be taken in languages other than English like the other national level exams such as the Civil Services Exam, Banking Exams, etc., this cannot be done without addressing the Exam’s current shortcomings such as the lack of regularity in conducting it. Further, the translation of technical knowledge from non-English languages to English would require expertise that may not be readily available. However, this shortcoming also provides the appropriate opportunity to increase the capacity of the Patent Office. Removing the language barrier would increase the pool of people who can be trained to become patent agents and would also increase opportunities for employment generation (hiring translators, scribes, etc., apart from patent agents), particularly during a time the country is facing increasing rates of unemployment.