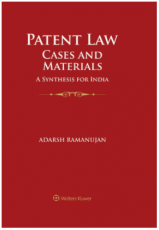 We’re pleased to bring our readers a book review of Adarsh Ramanujan’s recent book titled ‘Patent Law Cases and Materials – A Synthesis for India’, first published in September 2020. The book is available here (amazon affiliate link). The author of the review is Dr. Feroz Ali Khader. Dr. Feroz Ali is the author of ‘The Law of Patents – With a Special Focus on Pharmaceuticals in India’ (LexisNexis, 2007) and a visiting faculty at the National Law School of India University, Bangalore. He has also written guest posts for us earlier here and here.

Editor’s note 1: SpicyIP may receive commissions from purchases made through affiliate links.
Editor’s note 2: It should be noted this is a review of the Wolters Kluwer India edition. Adarsh informs us that there will be a revised edition in the form of a joint publication by Thomson Reuters and Taxsutra that will be released soon.

Book writing is an adventurous diversion for intellectual property lawyers. For it is here they get the closest to creating something of enduring original value, they get to switch sides and be, for once, the creator of the things they are usually engaged to protect. Those who choose to venture into this field are welcomed by an assortment of forms by which they can make their mark: Professor Donald Chisum’s seminal book Chisum on Patents, first published in 1978 took the form of an encyclopedic reference book for anyone interested in patent law – law students, patent agents and patent attorneys – now runs into 53 loose-leaf volumes with 5 updates every year. Thomas Terrell’s treatise on patent law, Terrell on the Law of Patents, has helped practicing patent attorneys for 135 years across 19 editions throughout the Common Law jurisdictions. Professors Robert Merges and John Duffy’s Patent Law and Policy: Cases and Materials, now in its seventh edition, is without doubt the most preferred textbook for teaching patent law in US law schools. The form of the book – be it a reference work, a treatise or a textbook – determines the content and the target audience to which it is addressed. The book under review, Patent Law Cases and Materials – A Synthesis for India, written by Adarsh Ramanujan and published by Wolters Kluwers takes the form of a textbook following the American casebook style.

Book reviews are rare pieces of writing that are crafted to welcome or to warn the arrival of a newcomer. Book reviews in patent law are even rarer given how esoteric its legal doctrines are, how few its practitioners have been and how difficult a subject it is to learn and teach. The confluence of law and technology that makes up the domain of patent law casts a further burden on legal writers who have to address issues covering existing and frontier technology, a task not likened by some of our brethren who choose to specialize in the social sciences solely to escape from the tyranny of physical sciences. The endeavor is further confounded by the bifurcation of patent practice that requires the author to ‘pitch’ the book to one of the two target groups: patent agents or patent attorneys. Patent law is practiced by two groups of individuals with distinct roles and responsibilities: by the patent agents (science graduates who are entitled to prosecute patents before the Patent Office on clearing the patent agent exam) and by the patent attorneys (law graduates who specialize in contentious patent proceedings before the courts). Though the author of the book is a registered patent agent and a patent attorney, he has chosen to address the book, by adopting the casebook style, to would-be practitioners – law students and lawyers seeking to understand patent law in greater detail. The book under review comes with some preinstalled reviews. Praise for the book can be found in the preliminary pages through some unique tools – foreword, afterword and readers speak – by no less than 5 readers.

The choice of form of the book under review is surprising. American casebooks were developed to teach law in the law schools with their long extracts from the case laws giving the students a flavour of what they would encounter later in the courts. The common law system based on precedential cases helped erudite judges to articulate the law, to distinguish it and the expound it by discussing the legal issues and the principles applicable in deciding them. While much of the recent jurisprudence on patent law were developed by the specialised patent courts such as the Court of Appeal for the Federal Circuit (United States) and the Patents Courts (United Kingdom), the prescription of the book – a synthesis for India – is a stark reminder of absence of an effective court specialized on patent law in India. With the scrapping of the IPAB by the Tribunals Reforms (Rationalization and Conditions of Service) Ordinance, 2021, the chance of a specialized court developing a home-grown jurisprudence in India, now looks remote.

Books on patent law usually follow the structure of the Patents Act – which is intuitively designed around the life of a patent, starting with its life as an application in the patent office (patent prosecution), materialising into a grant, and followed by enforcement proceedings in courts. The structure of this book is different. The book tries to accomplish in 10 chapters what the Patents Act does in 23 chapters, obviously leading to the omission of some aspects of patent law. The book is replete with extracts.  A typical chapter begins with an extract from relevant statutory provisions of the Patents Act, 1970 (despite the Patents Act reproduced in full in the appendix) and may include at times extract from the Patents Rules, though the practice of producing all the material at one place has not been consistent and concludes with the author’s commentary on the same. This is followed by the extracts from case laws from foreign jurisdictions, followed by extracts from Indian case laws in case there are any and then by the author’s analysis of the cases.

The book starts with explaining the concept of patents and patent protection and the procedural aspects, in the first two chapters. The next three chapters are devoted to patentability –  novelty, inventive step, and being capable of industrial application. Chapter 6 discusses enablement, fair basing (“fair basis” or “fairly based” as it is referred to in English texts) and clarity, and in Chapter 7 the book discussed the exceptions to patentable subject matter with some lengthy discussions on section 3(d). Chapter 8 covers claim construction and infringement. Chapter 9 deals with remedies available in case of infringement of patent related rights. Chapter 10, the concluding chapter, deals with compulsory licence.

If you randomly browsed through the pages of this book, you will be forgiven if you assumed this book to be an extract of statutory provisions and case laws. Such is the amount of quoted material in the book. Readers looking for a steady narrative on patent law will be disappointed as this book comes out as a patchy and jumbled account on patent law despite the author’s effort to tie them together through his notes. The extracts and quoted content in the book point to a book that is heavy with primary materials – things that are freely available in the public domain. The book has an enormous appendix and should benefit from an appendectomy in the forthcoming editions. One unforgivable gripe with the book, given its fat appendix, is the omission of the Patents Rules 2003, undoubtedly the most-dynamic part of the patent law that has seen some amendment activity almost every year since 2012.

One of the benefits of the structure of the casebook is the form factor that allows questions to be raised at the end of the topics to promote classroom discussion. Some of the good books in the market written by professors do this and they form a good ground for discussions. Thoughtful questions at the end of the extracted content would have been a welcome addition, which the author should consider in the forthcoming editions. As a book designed as an aid to teach patent law in law schools, it is hoped that the author will consider the feedback he receives from professors who use this book in the classroom and enhance the value of the book in the future editions.

Every year I teach patent law to hundreds of non-lawyers through two courses on patent law and patent drafting that I offer on Swayam and NPTEL. These courses are designed to introduce patent law as a career option to non-lawyers who have a basic degree in science with the additional objective of helping some of them to clear the patent agent exam conducted by the IPO. It will be difficult to recommend this book or for that matter any book which does not discuss patent prosecution in detail, leave alone the one that omits to include a copy of the Patents Rules that is quintessential for understanding what happens at the patent office. However, the potential of this book lies in its use as a syllabus book for patent law courses offered in law schools. The true test for this book’s effectiveness as a foundational book for teaching patent law in law schools lies in its acceptance by the faculty that teach patent law in the different law schools and colleges in our country. But for a book that is priced at Rs. 2995, it will be too much of an ask to require the students to buy this book.

Editors’ note: We’ve added the book to the list of IP books on the blog (also accessible any time from the Resources section of the website here).