In this post, Adyasha analyses the recent Delhi High Court order temporarily restraining the Canada-based law firm, ‘Singh + Singh Lawyers LLP’ (‘S&S Canada’) from infringing the trademark of the reputed Indian law firm, ‘Singh & Singh Law firm LLP’ (‘S&S India’). She first summarises the contentions of the two parties and the court’s reasoning. She highlights that the court failed to look at the limbs of balance of convenience and irreparable injury while granting the injunction. She then notes that while not discussed in the order, the issue of jurisdiction of the court could assume importance later on. She further argues that there appears to be a problem-solution mismatch in that the injunction plea based on transborder reputation would not have much effect in India as the defendant firm is anyways not operating here. Finally, she argues that there seems to be an extremely weak case of defence, if at all possible, under Section 35 on grounds of bona fide use. 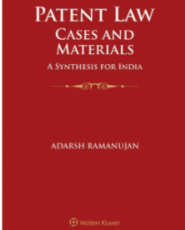 In this guest post, Dr Feroz Ali Khader reviews Adarsh Ramanujan’s recent book titled ‘Patent Law Cases and Materials – A Synthesis for India’, first published in September 2020. He finds the form of the book stylized similar to American casebooks as surprising given the absence of an effective court specialized on patent law in India. He then explains the structure of the book that includes 10 chapters with each chapter containing extract of relevant statutory provisions followed by the author’s commentary. It is then followed by extracts from relevant foreign and domestic case laws and then by the author’s analysis of the cases. He then mentions the themes touched upon in different chapters. He states that the book could benefit with reduction in extracts and content freely available in the public domain that is contained in the appendix. He, however, notes the need for inclusion of Patent Rules, 2003, in the book. Additionally, he states that since it is a book designed as an aid to teach patent law in law schools, thoughtful questions at the end of the extracted content would be a welcome addition. He concludes by noting that it might be difficult to recommend this book in the absence of detailed discussion on patent prosecution.

[Sponsored] The Top 7 Skills Every IP Lawyer Needs for Success

Representational image of a future lawyer

We brought to the readers this post by UNH Franklin Pierce School of Law, identifying the top skills every IP lawyer should possess and why, based on the collective experiences of its alumni and professors. The seven skills identified are namely: Communication; Understanding the ‘why’; Preparation and in-depth knowledge; Grasping the fundamentals; Maintaining a worldview; Proactivity and cooperation; and Laser focus. More details can be found in the post here.

We informed the readers about the call for papers by the Centre for Innovation Research and Facilitation (CIRF) in Intellectual Property for Humanity and Development (IPHD) of Chanakya National Law University, Patna (CNLU) for its ‘Journal of Academic Innovation & Research in Intellectual Property Assets’ (JAIRIPA). The submission deadline is August 31, 2021. Further details including submission guidelines and procedure are mentioned in the post.

Note: The applications for SpicyIP Fellowship are now open and will close on June 30, 2021.