We’re pleased to inform you that the People’s Health Movement (PHM) and the Third World Network (TWN) are organising a webinar on ‘TRIPS Waiver: Update and Analysis of Recent Developments’ on June 5, 2021. For further details, please see the announcement below. 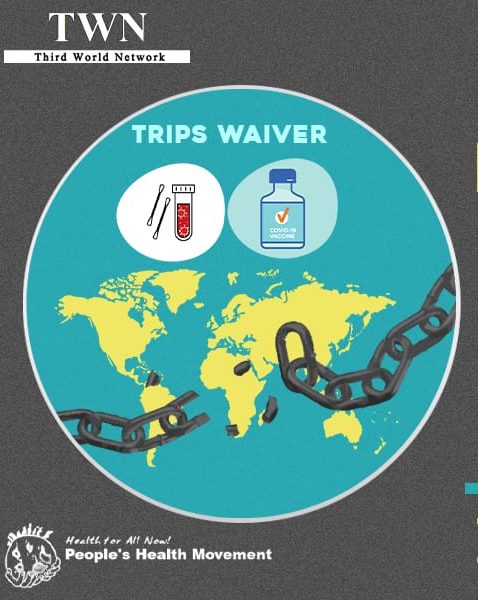 In the last one month we have seen some crucial developments with regard to TRIPS Waiver discussions at the World Trade Organisation (WTO). In early May, the United States government declared its support for the waiver, but limiting it to the vaccine. Many other developed countries, such as New Zealand, Australia and Canada, followed the suit and made similar declarations. This opened up the space for text-based negotiations. However, European Union and some other countries are yet to show any support to the waiver.

On 21st May, 62 WTO member countries submitted a revised proposal (IP/C/W/669/Rev.1) which is to become the basis of negotiations. It tries to address many criticisms that were raised earlier such as lack of a time frame and disincentivising research.

The  revised proposal seeks  at least three years waiver of  TRIPS obligations on copyrights, industrial designs, patents, trade secrets and enforcement of intellectual property on health products needed for treatment, prevention and containment of COVID-19. An important point to note is that the proposal is far more comprehensive than what the US and allies have shown support for. In addition to vaccines, the waiver proposal covers diagnostics, PPE kits, therapeutics, medical devices, raw materials, components, and the methods and means to manufacture them.

The WHO’s independent panel has made certain urgent calls requiring the WHO and the WTO “to convene major vaccine-producing countries and manufacturers to get agreement on voluntary licensing and technology transfer arrangements for COVID-19 vaccines (including through the Medicines Patent Pool). If actions do not occur within three months, a waiver of intellectual property rights under the Agreement on Trade-Related Aspects of Intellectual Property Rights should come into force immediately”

The TRIPS Council is slated to meet on June 8-9 where the countries will negotiate on the text. This will be a keenly followed event given that the negotiations are finally starting after eight months of submission of the original proposal by South Africa and India.

Against this backdrop, the People’s Health Movement (PHM) and the Third World Network (TWN) are organising a webinar to discuss the following:

After registering, you will receive a confirmation email containing information about joining the webinar.