We’re pleased to bring to our readers a 2 part post by Amit Tailor on the recent case Nippon A&L vs The Controller of Patents, which looked into questions of how and to what extent a claim in a patent application can be amended under the Patents Act. In the first part, Amit introduces the issue and argues that the court’s reliance on the European Technical Board of Appeal’s Konica case is questionable. In the second part, Amit argues that the court’s reliance on the Ayyangar Committee Report for allowing a wider amendment is not actually supported by the report. Amit has written several guest posts for us before and you can find them here.
Amit is a post graduate in Pharmaceutical Sciences from National Institute of Pharmaceutical Education and Research (NIPER), S.A.S. Nagar (Mohali) and LL.B. from Faculty of Law, Maharaja Sayajirao University of Baroda (MSU), Vadodara. He has also completed his graduation in Pharmacy from MSU, Vadodara. Amit is a registered Patent Agent and an IP practitioner and currently part of the IP litigation team at Sun Pharmaceuticals. He was earlier associated with Cadila Healthcare (currently – Zydus Lifesciences). He also writes poetry with penname “કાચબો” [Kācabō – meaning tortoise/turtle] at www.amittailor.com : અમિતટેલર.કોમ – કાચબાની કલમનું કાયમી સરનામું (Permanent Address of the Pen of Kācabō).

The Extent of Amendment Allowed in a Patent Application: Part 1 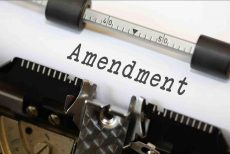 Recently in NIPPON A&L INC. vs. THE CONTROLLER OF PATENTS [C.A.(COMM.IPD-PAT) 11/2022], the Delhi HC has set aside a Controller’s order refusing a patent application and remanded the case back to the Patent Office (the “Judgement”). The Controller had rejected the application on the grounds that the amendments to the claim(s) entered by the applicant changed the scope of the claims and therefore not allowable under Section 59(1) of The Patent Acts, 1970 [the “Sec. 59(1)” or the “Section” and the “Act”]. This post is trying to review the position, in India, on the issue – what can be allowed to be entered as an amendment to a claim u/s 59(1) of the Act. Later, the post would review the position in light of the Court’s reasoning in the Order.

Provisions of Amendment, to Specification and to Claims, Under the Act

The Chapter X (Sections 57-59) of the Act specifically deals with amendments to patent application and specification. While, Sec. 57 provides broadly for amendments to application and specification or any other document related thereto, before the Controller, and Sec. 58 provides for amendments before the High Court, the Sec. 59 provides certain limitations, subject to which, those amendments can be entered. Relevant to the instant inquiry is Clause 1 of Sec. 59, which reads as follows –

Careful review of the language of the said clause makes it clear that, primarily, two express limitations are imposed for a claim amendment to be permissible u/s 59(1): the amended claim – (i) shall not claim matter not in substance disclosed or shown in the specification – and (ii) shall fall wholly within the Scope of a claim of the specification-, before the amendment.

I.e. when it comes to reviewing a claim amendment against the provisions of Sec. 59(1), the relevant inquiry requires the fact finder to look into the claims before and after the amendment in addition to the specification as filed. The amended claim(s), for the purpose of this section, being disclosed in the specification (i.e. in the description) is necessary but not a sufficient position and the claim must also fall wholly within the scope of a claim of the specification before the amendment.

Reasoning of the Court in NIPPON & Corresponding Legal Position

The claims at issue in this case were the so called – ‘product-by-process’ claims, which were amended by the applicant to ‘process’ claims. The Controller had rejected this amendment on the grounds that the amendment in question changed the scope of the claims, and the amended claims would not fall wholly within the scope of the claims before amendment; hence not allowable u/s 59(1).. The Delhi HC, on appeal, allowed such amendments to be entered and remanded the case back to the Patent Office to review the amended claims on merit. While allowing the appeal, the Hon’ble Court made certain observations like – the originally filed product-by-process claims had both the elements – product and process, amending a product claim to a process is markedly a ‘step down’, such an amendment is a ‘disclaimer’ and claims can be amended by way of disclaimer, etc. This post does not focus much on such observations or on other ancillary issues of the case, viz. – the ‘product-by-process’ type of claims and their scope vis-à-vis the ‘process’ claims, the effect of such amendments and the type and amount of protection afforded by the same, etc.; rather the post focus on the reasoning provided, and the authority relied upon, by the Hon’ble Court to allow the appeal and thereby the amendments.

The Hon’ble Court relied upon a decision of the European Technical Board of Appeal (the “Board”) in one Konica/Sensitizing (“Konica”) wherein the Board allowed the applicant therein to amend the claims from so called ‘product-by-process’ claims to ‘process’ claims, drawing authority from Article 123 of EPC (the “Art. 123”). This reliance on Konica and drawing authority therefrom based on the Art. 123 is factually erroneous for the following reasons.

Firstly, Konica is a foreign authority and the decision of the Board therein is based on a completely different legislation compared to that in India. A side-by-side comparison of the two can make things clearer.

Apparently, there is a marked difference between the language, and therefore expectedly, the scope of the two statutes. Without delving deep in to the interpretation of the Art. 123, simple reading of the language thereof makes it clear, that the mandate of Art. 123 is to allow amendments to an application in general or broadly, without categorizing them in two – one for the description and one for the claims. Whereas, the position in India is completely different. Sec. 59(1) clearly provides different mandates for allowing amendments to description and claims.

Even assuming for the sake of argument, that an amended claim ‘not falling wholly within the scope of a claim before the amendment’ may be allowed to be entered at the EPO, under Art. 123, the same cannot be said to be true for India under the Act. As discussed earlier, for a claim amendment to be allowable u/s 59(1), the amended claim must fall wholly within the scope of a claim of the specification before the amendment. Therefore, drawing analogy from the Board’s decision in light of Art. 123 to the facts of the case under Sec. 59(1) is clearly erroneous.

In addition to that, the Hon’ble Court’s observation that “in the case of Konica (supra), the Appellate Board categorically holds that the conversion and the change in category of ‘product by process’ claims to ‘process’ claims is clearly admissible.” is not fairly supported by the very citation relied upon by the Hon’ble court. Konica does not expressly mandate that such a change from a product-by-process claim to a process claim may be generally allowable as a right or a regulation under Art. 123, but rather categorically said that such a change would be admissible under the circumstances of the case therein, see para. 50 & 51 of the Judgment, – “The change in category from a product-by-process claim to a (manufacturing) process claim is, in the present circumstances, admissible.” (emphasis supplied) i.e. even assuming that authority may be drawn from the foreign Board’s decision on a matter under Art. 123, the said authority itself does not hold that such a change is ‘clearly permissible’ as a general rule.

Therefore, reading a foreign authority on a completely different statute in to an Indian statute, contrary to express language of the legislation is prima facie per incuriam and against the clear legislative mandate.