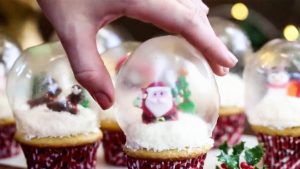 In an interesting case from the United States, an independent food blogger/entrepreneur has sued The Food Network for copyright infringement. Upon perusal of the IPKat coverage of the issue including the complaint (linked in the same coverage and available here), the factual matrix supporting the claim becomes fairly clear.

Sugar Hero is a website run by blogger turned entrepreneur, Elizabeth Labau. Through this website, she shares her innovative, self-created recipes in creative ways including videos, pictures, etc. This website is her primary source of revenue, which is generated through advertisements and affiliate sales. It is also said to have garnered a lot of positive attention for Ms. Labau – making it her full-time pursuit. She maintains and constantly develops her website herself, so that she can compete with the bigger players in the food-TV market.

One such recipe she created was the snow globe cupcake recipe, which became instantly popular. Subsequently, true to her objective of teaching everyone to become “sugar heroes” in their kitchens, she published a Facebook-style video of how to make these snow globe cupcakes. (For the uninitiated – a Facebook style “how-to” video is something similar to the snow-globe cupcake video and these over here. It involves a quick introduction of the ingredients to be used, followed by a step-by-step demonstration of the recipe and the usage of the ingredients – generally in fast forward, without any verbal instructions, and with a tune playing in the background.) Soon after, she noticed a similar video on the Food Network Facebook page, which seemed to have been copied from her video frame by frame.  When her requests to be referenced in the video were ignored, she brought the present suit. The plaint notes how the Food Network video had garnered about 11,000,000 views – which could have gone instead to the plaintiff, whose creative imprints made up the work.

To quote an excerpt from the 12-page long plaint:

“The Snow Globe Cupcakes Video is an original work, copyrightable under the Copyright Act. Plaintiff has applied for a copyright registration from the Copyright Office for the video. The registration number for the video is set forth in Exhibit 1. Thus, Plaintiff has the exclusive rights and privileges to reproduce, distribute, and display the Snow Globes Cupcakes Video. Defendants infringed Plaintiff’s exclusive rights in the Snow Globes Cupcake Video by copying, reproducing, duplicating, distributing, and displaying it…without Plaintiff’s permission.”

Copyright law, as it exists in the USA protects “original works of authorship that are fixed in a tangible form of expression.” This is embodied in §102 of title 17 of the US Code. It can thus be said that copyright protection in the US includes within its fold: (a) original (b) works of authorship (c) fixed in a tangible form (d) of expression. Simply put, if these four elements do not figure into your creation, you cannot claim copyright protection in the States. A “work of authorship” under §102(a) includes works such as literary works, dramatic works, motion pictures, etc. This work must be original, which has in the American context come to mean a work that evidences a certain “minimum degree of creativity.”  The landmark case of Feist v. Rural held originality to be contingent on the author’s independent creation of the work, along with the application of a minimum degree of creativity. This creativity, however, need not be immense. The Supreme Court of the US (SCOTUS) clarified,

“Originality does not signify novelty; a work may be original even though it closely resembles other works so long as the similarity is fortuitous, not the result of copying.”

Tied to this rather primary element of copyright law, is the principle that only the expression of an idea as protectable under copyright, instead of the idea itself. The same is not only fundamental to copyright law, but has also been accepted by American courts through cases like Harper & Row v. Nation, Fiest, Baker v. Selden and several others. Finally, US copyright law only recognizes original expression fixed in a tangible medium. This requirement of “fixation” has been subject to much debate, but as of now, under §101 includes fixation directly by the author himself, or by another under his authorization.

Viewed in this context, Ms. Labau’s claim does not appear to be anything out of the ordinary. Her video qualifies as a “motion picture/audio visual work” (work of authorship) equipped with a minimum degree of creativity to make it different from other similar works. It is also fixed by herself in a tangible medium – allowing her to communicate her idea to the public. However, the plaint as reproduced earlier, notes that she has “applied for registration” of the video. She has provided this registration number, but there is no mention of a registration certificate or effective date of registration. The copyright office circular here notes that the copyright office must have acted on an application, for an infringement claim to be made. This can be evidenced through the registration certificate.

A case for infringement?

With all of this in place, does Ms. Labau have a strong case against The Food Network? To attempt an answer to that question, one has to trace the judicial treatment of copyright infringement in the US. Similar to our own copyright law, the US also treats an infringement of the exclusive rights granted under copyright law as an infringement of copyright in the work itself (§501 r/w §106 of title 17). For purposes of this post, I am restricting this discussion to one such exclusive right – a “reproduction” of the work. (It is to be noted here that under US law, motion pictures are not treated differently from other works. They also need to be “original” to obtain protection and their copyright can be infringed through a broader “reproduction.” Indian law affords cinematographic works a narrower protection – as I had outlined previously over here.) US law has recognized that this exclusive right of reproduction can be infringed in two ways: through absolute imitation, and substantial copying. A paper here traces how 19th century courts determined the latter, taking care to tie in considerations of intent, bad faith, etc while deciding whether the differences between two works were “colourable or real.”  Recent times have seen courts undertake the infringement analysis rather subjectively. Some courts undertake a quantitative analysis of infringement (trying to discern how much of the work has been copied), whereas others undertake a qualitative analysis (even if the copying was minimal, did it copy the essence/heart of the work?)

I have to admit, that a conclusive prediction of this case is a little difficult, at this point – considering that I haven’t been able to access the Food Network video. As such, we must wait to see whether the court finds the video to have infringed Ms. Labau’s. Of course, Food Network is sure to use its all the big guns available in its copyright arsenal. To my mind, these are: the merger doctrine – that recipes are not protectable under copyright law*, and certain forms of expression (like parts of the how-to-video) are so merged with the underlying recipe that they cannot be protected to begin with; the scenes a faire doctrine – that some parts of the video are so essential to the expression of a how-to-food video, that they cannot be copyrightable, so as to keep them from being monopolized; the lay observer test (connected closely with the earlier two) that a layman observer would not consider the two to be substantially similar.

The beginning of something new?

IPKat notes that the case has, “set an interesting precedent for the food industry…If the Californian court sides with LaBau, the decision may re-open the doors of copyright protection in cases of highly-visual or unique recipes recorded in ‘how-to’ videos by their authors.” IPKat, thus, along with many others (see here and here) highlights how protection through Facebook videos, could be one of the few ways of protecting and commercializing recipes. In extension, making it one of the few modes of recourse available to entrepreneurs like Ms. Labau who spend huge amounts of time and resources to develop these recipes, and then depend on them for livelihood. If that is so, the protection granted to films has to be closely assessed.

I’d written a post (referenced earlier), where I revisited copyright law governing film in India, and argued for films to be afforded copyright protection equal to other literary works. Recently, we also had a beautifully written guest post that put out points in opposition to my views. Although that debate is for another time, it has to be agreed that cases like this (and a countless variety of others) prompt us to revisit our existing cinematic copyright law. While I await this court’s decision, I can only hope that we are at the threshold of a copyright discourse of a monumental scale – one that will make way for developments, nothing short of extraordinary.

The case has been instituted by Elizabeth Labau against Television Food Network, before the US District Court, Central District of California, with case number:  2:17-cv-04077.

*Speaking of underlying recipes and their uniqueness, the “snow globe” cupcake itself is not entirely unique. While trying to recover the two videos forming the subject matter of this case, I came across a number of videos teaching these quirky little cupcakes, accessible here.