Last week, I had drawn our readers’ attention to an information note available on a Department of Personnel & Training website which states that Justice (Retd.) Manmohan Singh’s proposal appointment as IPAB Chairman has been approved by the Appointments Committee of the Cabinet (ACC) and that the DIPP has been informed of the same. However, strangely, the DIPP still doesn’t seem to have received any information in this regard. In a reply to a tweet by one of our readers, requesting for an update on the appointments to the vacant IPAB posts, on August 25, the DIPP mentioned that “the appointment of Chairman is under the consideration of the Government” and for the appointments to other posts (i.e. Vice Chairman and Technical Member (Patents)), “the process has been initiated”. Here are the screenshots of the tweet and DIPP’s reply to it: 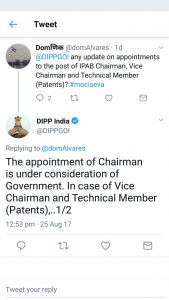 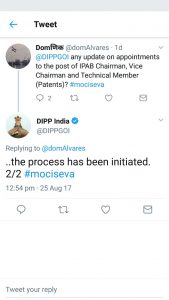 The Commerce and Industry Minister, Nirmala Sitharaman has also been reported to have said last week that “the government would soon appoint the Chairman of IPAB together with the Copyright Board”. This gives rise to the confusion as to whether Justice Singh’s appointment to IPAB has been approved by the ACC (as mentioned in the information note) but the Commerce Ministry has not been informed or is not aware of it, or, the appointment is actually still under Government consideration (as stated by Ms. Sitharaman and the DIPP) and the information note is false. It will not be surprising if the former turns out to be the case, given that Ms. Sitharaman seems ignorant of even the fact that the Copyright Board has been merged with the IPAB and thus, a Chairman is not to be appointed to the Copyright Board now but a Technical Member (Copyright) to the IPAB instead.

Irrespective of who is appointed, the appointment, to be made under Tribunal, Appellate Tribunal and other Authorities (Qualifications, Experience and other Conditions of Service of Members) Rules, 2017, would be subject to the final order passed by the Madras High Court in the writ petition filed by the Madras Bar Association in June, challenging the constitutionality of these Rules along with Sections 156 to 189 of the Finance Act, 2017. The challenge has been made inter alia on the ground of violation of the doctrine of separation of powers and the independence of the judiciary. Under the impugned Rules, the Search-cum-Selection committee for posts of Chairperson, Vice-Chairperson and judicial members of the IPAB as mandated by the Rules, consists of only one member of the judiciary against four members of the executive. And that for the post of Technical Members does not comprise even one member of the judiciary. This composition, as argued by Prashant here, is in violation of the Madras High Court’s judgments in Shamnad Basheer v. Union of India (2015) and SIMCA v. Union of India (2016), wherein it was held that the committees constituted for appointments to IPAB and Copyright Board must be constituted in a way that the judiciary and not the Executive has a predominant role in the selection process and thus, the Rules mandating such composition are most likely to be struck down as unconstitutional. These Rules have, very recently, been challenged before the Supreme Court as well in a writ petition filed by Navdeep Singh, President of the Armed Forces Tribunal (AFT) Bar Association. Apart from the composition of the search-cum-selection committee, Justice Singh’s appointment to IPAB (assuming the afore-referred information note is not false), as Prashant points out in his recent post, is problematic on other counts as well.

One hopes that these writ petitions are heard and decided at the earliest, securing the independence of IPAB and the other affected tribunals.