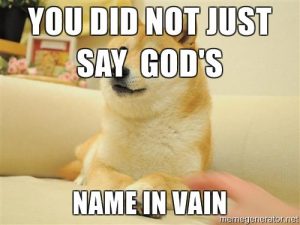 I have often worried about the tendency of our Gods these days, to slip out of our churches, mosques and temples and dance (the proverbial tandav?) about our secular spaces. It could be that my thinking is influenced by the ‘sickular’, ‘libtard’ narrative. But, no Indian will deny that the usurpation of the secular space by our Gods, influences reactions of a very limited range – anger, fear, sadness, and sometimes just a massive facepalm. Perhaps the only upside is that sometimes I get to feed the IP nerd in me and reflect on what happens when people try to trademark our Gods.

The present order was passed by the Bombay High Court earlier this month and came about as a result of an appeal against an interim order passed by J. Patel last year. The Bench, through this order, upheld the same and dismissed the appeal.

Our story began sometime in 1995, when the predecessor of the plaintiff (a company doing business in household and industrial cleaning tools, i.e. mops, brooms, etc.) adopted the trademark “LAXMI” for its brooms. The same was registered in 2003 under No. 1195753 in class 21. Fast forward to 2015, when the plaintiff notices that the defendants (another company doing business in the exact same thing) are using the trademark “MAHALAXMI” for its own brooms. Unable to take this lying down, the plaintiffs approached the Court claiming trademark infringement. Justice Patel refused interim relief in 2016 and posted the suit for framing of issues. The plaintiffs, then appealed this refusal claiming that the order suffered from a patent illegality.

Let’s dwell on the interim order for a bit, before we move on to the current appeal. J. Patel refused to grant an interim injunction for infringement/passing off of the plaintiff’s “LAXMI” mark. J. Patel squarely applied Bhole Baba v. Parul Foods (covered by us over here and here) to hold that “LAXMI” is both a common female name and the name of a Hindu deity, and therefore cannot be monopolized by the plaintiffs. He observed that the plaintiff and defendant both had different and unique labels containing the word “LAXMI”. He also rejected the contention that the word “LAXMI” was the defining feature of the mark and should be protected. Since the plaintiff’s registration was that of a label or a device mark, the plaintiff cannot be allowed to extract the common word used in the label and claim exclusivity over it. Further, in such a case, even the slightest variation to the common word (in this case, the prefix “MAHA” to “LAXMI”) could lend sufficient distinction to set it apart from the plaintiff’s mark. Applying Bhole Baba, the common word would have to have acquired some secondary distinctiveness that would immediately bring to mind the plaintiff’s product. In this case, not only are there numerous examples of rival broom products that use the word “LAXMI” – but also, the common name “LAXMI” has not acquired any secondary distinctiveness to refer to the plaintiff’s brooms. In fact, as the court observed, “nobody…calls for a broom by referencing a lady’s name or that of a deity.”

At the cost of repetition: I don’t think the J. Patel went after validity of registration of the mark. He simply held that the registration was that of a device or label. No identity or similarity in the labels was claimed by the plaintiffs. And just because the label contains the common name “LAXMI” – the plaintiffs cannot extract it out of the label mark and indirectly claim exclusivity over it, as in the nature of a word mark.

In appeal, the Bench confirmed this opinion.

The order suffered from patent illegality, because J. Patel erred in going after the registration of the trademark at the interlocutory stage. Further, the registration of the mark was prima facie proof that the mark had obtained distinctiveness. J. Patel never recorded whether there was any identity or deceptive similarity between the two marks – something that was the primary duty of the Court determining the grant of injunction, at the interim stage.

In response, the defendants submitted that a label mark is different from a word mark. There is no identity between the label mark of the defendant and that of the plaintiff.  In such a case, it is to be considered whether the marks are confusingly similar or cause/are likely to cause confusion among unsuspecting consumers with average intelligence and imperfect recollection. This, again is not the case, because: (a) the word “LAXMI” by itself is not the primary feature of the mark, and (b) since it is a common name, slight variations to it would have the effect of distinguishing it in the mind of the consumer.

The Court agreed with the defendants and J. Patel that a label mark is different from a word mark. Then, the court considered both the marks separately and opined that the two marks are neither identical not deceptively similar – being entirely different in design and make. The differences are enough to distinguish the two marks in the minds of the consumer of average intelligence and imperfect recollection. Further, it held that names of Hindu Gods are not exclusive and cannot be monopolized by one party. Finally, it held that according to settled law, the appellate court can only interfere with an interim order if it is found to have been delivered arbitrarily or in ignorance of settled principles of law. The court opined that this had not happened here, and dismissed the appeal.

Are Gods’ names too “common”?

These orders have become part of a series of orders, adjudicating the use of names of Gods as trademarks. (See here for our series on religion and IP.) Both these orders categorically state that there can be no exclusivity or monopoly over the name of a God. However, even while doing this, it has merely espoused settled principles of trademark law. Common words and phrases cannot be monopolized. For common words to be protected as trademarks, they have to acquire a distinctiveness such that they set apart the goods for which they are used. And thus, in doing so, fulfil the requirement u/s 9 (1) (a) which doubles as one of the primary functions of a trademark i.e. to distinguish the goods of one person from those of another.

This principle applies to names of Gods, because they lack distinctiveness as per the standard prescribed u/s 9(1). Names of Gods qualify as common names/words that cannot be monopolised. This has been accepted position by most courts dealing with the subject (see Bhole Baba, Sachdeva v. Educare). Notably in 2015, the SC held that names of religious books cannot be claimed as trademarks. Aparajita studied the decision at length over here. In its decision, the SC also cited the Eighth Report on the Trade Marks Bill, 1993 in which the Parliamentary Standing Committee opined against the registration of any symbol relating to Gods, Goddesses, places of worship as trademarks. On an aside: a diversion from this trend came earlier this year when the Madras HC, (thanks to Anon for pointing this out) allowed the name “DURGA” to be protected through registration – holding “JAI DURGA” to be phonetically similar to the same.

In the past, refusal of individual monopoly over the name of a spiritual leader has also been justified on the grounds that such commercial exclusivity cannot be granted over a religious figure. In the case of Osho International Forum v. Osho Dhyan Mandir (interestingly also one of Prof. Basheer’s earliest cases as a practitioner) which Sumanthi covered here, the National Arbitration Forum held that, “one cannot possess trademark rights in a name/mark of such universal significance which cannot and clearly does not serve as a source indicator or distinguishing moniker.”

The limitation of distinctiveness may easily be overcome if the name of a God is registered as a label or device mark. In such a case, identity or deceptive similarity with that device or label would invite due intervention by the court. The orders are further clear that one cannot extract the common word from the label and claim exclusivity over it.

The registration of such names as word marks, on the other hand, should ideally be refused.

The question then is: provided they are registered as word marks, what is the outer limit of an interim adjudication for the purpose of injunction? In other words: can the court, at the interim stage, consider a mark as too “common” or as lacking distinctiveness (u/s 9(1)), to be granted protection?

An interim injunction can be granted on the basis of a “prima facie” case in favour of the plaintiff. A valid registration grants exclusive rights to the registered proprietor of the mark. According to section 31 (1), registration is prima facie evidence of validity of a trademark. Thus, it wouldn’t be wrong to suggest that registration of the word mark, prima facie qualifies the plaintiff/proprietor for an injunction. Mathews makes arguments in support of this, through his post here.

Precedent, however, dictates the opposite. Cases such as Marico Ltd. v. Agro Tech and Lupin Ltd. v. Johnson & Johnson hold that a court can go into the validity of registration of a trademark even in the interim stage while determining the grant of injunction. This is in case the registration appears to be prima facie illegal or invalid or fraudulent or shocks the conscience of the court. In Lupin Ltd., the court considered a number of cases to hold that a court may at the interim, hold registration as prima facie invalid. While doing so, however, it took care to set the bar of “prima facie invalidity” very high.

If a court, while granting an interim injunction, is not allowed to consider whether a mark is too “common” to qualify for protection – anyone could monopolise a common word. Even if for a limited period, this would seriously affect the foundations of trademark law.

But wait a minute. Could it be argued that all names of gods should not be considered as “common” names or phrases? As Aparajita explains here, the list of hindu gods are endless. Do we consider all as “common” names barred from exclusivity? Does the same assumption extend to all demigods, saints, kings and creatures from all our myths?

Before I get too carried away, let’s defer answers to these for another day. Atleast until we’re all blessed with the divine intervention necessary to obtain them.

P.s. Special thanks to Surbhi Agarwal for helping me access the Bombay HC website for the interim order.